As a physician, Assemblymember Joaquin Arambula, D-Fresno, saw first-hand the impacts of extreme drought on San Joaquin Valley communities. It served as inspiration for him to run for the Assembly in 2016.

Arambula spoke with Agri-Pulse recently about his bill to support rural agricultural communities and about the many water bills passed this year in Sacramento.

I spent 10 years as an emergency room doctor in Selma, the raisin capital of the world, and got the privilege of taking care of both farmworkers and farmers.

I really grew to appreciate agriculture and its role for our rural communities and how proud so many of us are coming from those communities of the benefits and contributions that agriculture makes.

It was in the emergency department that I actually worked through the last drought that our state had. I was forced to face head-on the struggles that our community has when we don't have water for our economies and communities to thrive. And I really do go to our state capitol to carry that voice and those stories, to make sure that we're continuing to fight for agriculture and our rural community.

Oftentimes, it's stories of not being able to make ends meet. Because our community didn't have enough water, there wasn't enough work. Because they didn't have enough work, they couldn't afford the prescriptions or treatments that I was recommending. It led to a cascade that oftentimes spiraled in a way that forced them into the emergency department to come to see me. It was in that place that I saw them really just trying to figure out how to make their reality work. It's a struggle when we face a drought.

All I remember from those times was really their wanting and needing for a better plan for both our state and our community and for future cycles of not having enough water. 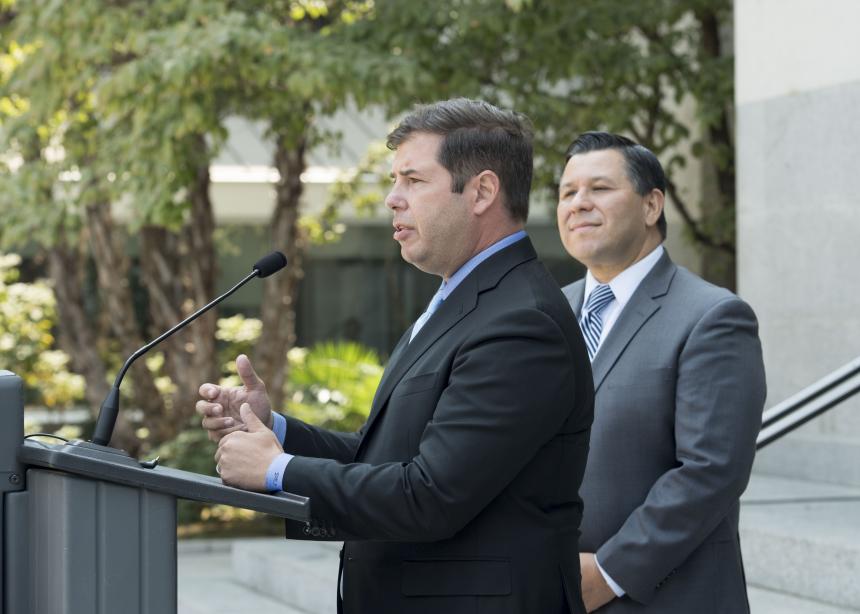 Secretary Karen Ross of the California Department of Food and Agriculture really came to us with this idea of wanting to place an ag economist within her department. If there were policies that were working their way through the Legislature, she wanted someone with expertise to analyze the policies and determine their real effect.

Oftentimes, we just look at what the changes are in terms of how much we sold in crops, rather than looking at the multiplier effects that occur from the processing, transporting and the trade that goes on with agriculture as well.

We were excited about working on the Ag and Rural Prosperity Act and bringing this ag economist to the state capitol, because it would allow us to better understand some of the unseen or unintended consequences of legislation and what their real economic impact was for communities like ours.

SGMA has the potential to dramatically change our landscape. It was because of that regulation that we worked on AB 658 this year. The governor in 2015 had passed an emergency regulation to allow for doing more groundwater recharge. We are working on AB 658 and have it on the governor's desk awaiting his signature. To better allow for permitting to do groundwater recharge, we should do more with the water we have rather than sending it out to the ocean. Having a permitting process that allows us to prepare for high-precipitation events allows us to meet the goals and sustainability within SGMA.

There's a bit of an irony that goes in this if you're from the valley. Our community knows that it actually took flooding to sustain agriculture for decades in our communities. But as we transitioned to drip (irrigation), we lost some of that sustainability. As we have high-precipitation events, we may need to figure out which fields or areas have the most permeable basins, so that we can start doing more flooding with these high-precipitation water events to make sure that we're meeting our goals as a state.

The hope is that if we create the permitting process, it makes it easier that farmers and corporations will want to invest in the conveyance, because they see the benefit to preparing for the next high-precipitation event.

We know weather is cyclical here in the valley. We have La Niña and we have droughts. We need to capture as much water as we can in those high-precipitation events to prepare for the next round, which we know is around the corner. 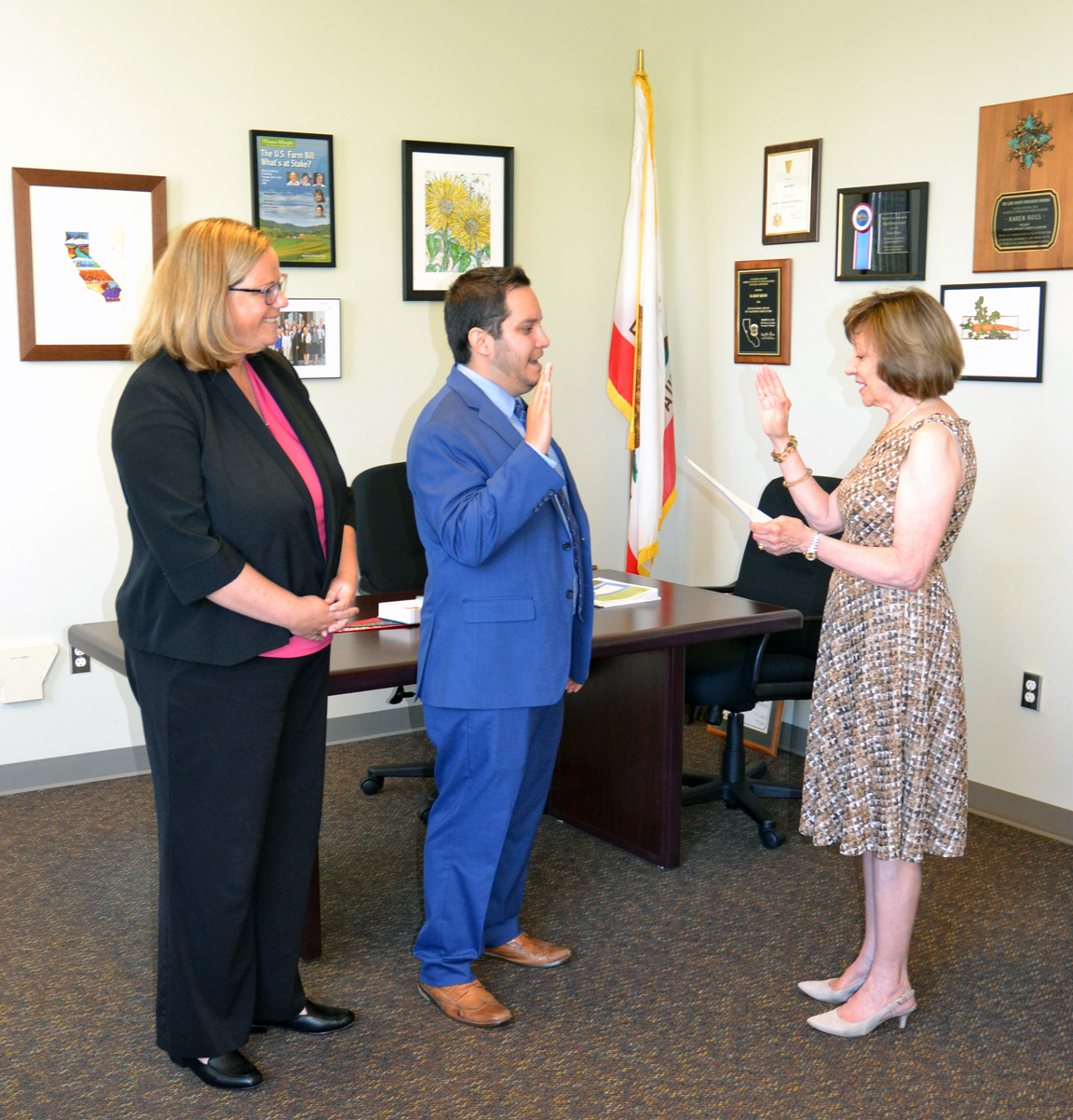 Arturo Barajas, a former legislative aid for Asm. Arambula, is sworn in as a CDFA deputy secretary in July.

I believe it's imperative for the state to continue to invest in water infrastructure as our population continues to expand. We have roughly the same amount of storage that we had when we had 20 million people. I believe that we need to be thinking about all the solutions that help in our water tool chest: increasing storage, increasing conveyance, increasing recharge. We need to support moving and storing water to prepare for the next dry spells. That's why I was pleased to support Senate Bill 559 (on fixing the Friant-Kern Canal). It has been made a two-year bill, which will allow us time. There was quite a bit of collaboration between local, state and federal partners to work on a project of this magnitude. I'm glad that we moved the ball forward this year and know that we need much more work to be done.

If we’re to meet our goals of SGMA, we have to continue to invest as a state in water infrastructure. I'm pleased that our governor and his leadership team are really looking at what future investments need to be made and are trying to strategize that out with an infrastructure plan.

It ties in fairly well with the select committee that I'm chairing, dealing with regional approaches for the water crisis. We all should know that a one-size-fits-all doesn't work. We're going to need different solutions for Coachella Valley, Central Valley and Northern California that work for each of those regions.

I was happy to allow some time for discussions to occur on the bill. But I really do feel like at the end of the day, as a scientist, I have to be in favor of biological opinions continuing to evolve (for determining water flows for the Central Valley Project). It's why I ultimately voted against the bill when it reached the floor. I didn't feel that it met the goals that we should be trying to strive for

I was really pleased to see the governor be a backstop, as he's continued to see our valley and advocate for our communities. It was shown by his public statements wanting to veto this bill when it eventually gets to his desk.

One is AB 450 on the Apiary Protection Act. We did some cleanup language. We worked on this bill last year regarding just where bees are within a county and between counties so that you're reporting it to the ag commissioner, so we don't have the mortality.

In good news, one of our staffers, our legislative aid, has become a deputy secretary under Karen Ross at CDFA. It's another way that we're going to want to continue to be involved in this arena and work in this space, to continue to partner with Arturo Barajas.