Sugarbeets are stuck in the ground across thousands of acres in the upper Midwest, leaving producers and policymakers wondering just how to handle an unforeseen and unfamiliar situation.

Sugarbeets are grown in the Red River Valley in Minnesota and North Dakota, Michigan, Colorado, Montana, Nebraska and Wyoming.  The harvesting process involves pulling the beets from the ground before processing turns them into the refined product that makes its way into cakes and cookies. But this year’s harvest has proven to be especially difficult and, in some cases, downright impossible.

“There could be as many as 150,000 acres of sugarbeets left in the field this year,” Scott Herndon, vice president and general counsel of the American Sugarbeet Growers Association, told Agri-Pulse. “If they're in the field now, for the most part they're in there forever because they're frozen in.”

Heavy precipitation created muddy fields that were challenging to navigate before temperatures plunged and froze the beets in the ground. Sugarbeets are typically grown, sold, and processed through co-ops, and now those entities might be asking for money back in exchange for unreturned beets. According to the Grand Forks Herald, producers growing for the American Crystal Sugar Co. will be required to pay the co-op $343 for each unharvested acre of sugarbeets. A spokesman for the co-op did not respond to a request for comment.

The plight of sugarbeet producers was top of mind on a recent trip to North Dakota by Bill Northey, USDA’s undersecretary with jurisdiction over the nation’s farm programs. He told Agri-Pulse USDA is “in conversations” with co-op leaders, producers, and lawmakers in the area to determine the best course of action. 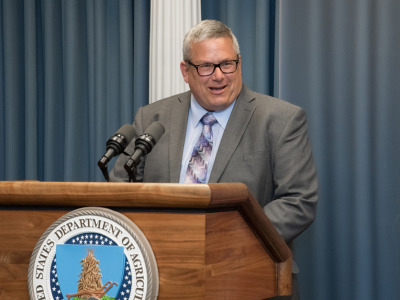 “We're going to have conversations to see if there's things that we should or shouldn't do,” Northey said. “We're at the very beginning of conversations about whether (USDA’s Wildfire and Hurricanes Indemnity Program) works or some other mechanism works, or maybe Congress will look at creating some other kind of mechanisms be able to help them.”

Northey said there is “no conclusion yet,” but the issue is “certainly on our radar.”

Last week, USDA announced intentions to make sure there was enough sugar in the country, opening the door to more imports of the product. Congress has also addressed weather challenges for other aspects of American ag production hurt by weather challenges in 2018 and 2019, which led to the creation of the WHIP+ program earlier this year to issue payments to those hit by weather-related disasters.

Herndon said the weather challenges also serve as a reminder of the importance of the current suite of risk management tools available to producers.

“When we're defending crop insurance on the Hill, this year is a good reminder that proper insurance is incredibly important,” he said. “It doesn't make growers whole, but it can get them to the next year.”