President Donald Trump’s latest claim that he might push back a trade pact with China until after the 2020 elections has unleashed a new wave of uncertainty for America’s farmers who had been counting on promises that a resolution to the trade war was imminent.

“In some ways I like the idea of waiting until after the election for the China deal,” President Donald Trump told reporters in London during a trip there Tuesday, “but they want to make a deal now and we’ll see whether or not the deal’s going to be right.”

It was only a little more than a month ago that Trump invited Chinese Vice Premier Liu He into the Oval Office and then announced that a trade deal had been mostly agreed to and would be signed by mid-November.

But that was in October and the ground has shifted, even as U.S. Trade Representative Robert Lighthizer and Liu continue their talks to try to nail down a partial, Phase One, pact that was promised to provide a massive boost to U.S. agricultural exports. 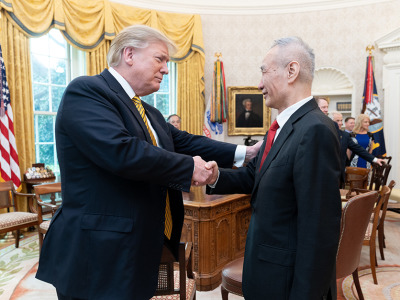 President Donald Trump and Chinese Vice Premiere Liu He meet in the Oval Office in April.

China is making it clear that it won’t agree to a deal until some of its demands are also met. The Global Times, a newspaper run by China’s Communist Party, tweeted Saturday that the U.S. would have to first agree to cut its tariffs.

“Sources in Beijing informed the Global Times that China insists the tariffs must be rolled back as part of the first-phase trade deal,” the paper warned. “A U.S. pledge to scrap tariffs scheduled for December 15 cannot replace the rollback of tariffs.”

But Trump insisted Tuesday that it was all up to him.

“The China deal is dependent on one thing — do I want to make it,” Trump said. “Because we’re doing very well with China now … I have no deadline, no.”

While the precise ramifications of suffering another year under trade war conditions are unclear, it’s not a rosy scenario, says American Farm Bureau Federation economist Veronica Nigh.

“It certainly does not bode well for prices going into 2020 unless there’s some significant, unfortunate weather event,” she said. “Another year of additional stocks and all that much longer to get out from underneath them.”

Shifts in planting decisions, rising stockpiles, less exports and the need for billions more in subsidies are just some of the potential results of a trade war that persists for another year, say farm economists and leaders.

Nothing is clear except for the fact that the pain of a tough farm economy will continue.

“Certainly, what it does mean is there’s a lot of uncertainty,” says Joe Glauber, a senior research fellow at the International Food Policy Research Institute, former chief agriculture negotiator for the U.S. Trade Representative and former USDA chief economist.

Trump has threatened before that he might not agree to a deal before next year’s elections, but this time his comments come as America’s farmers were expecting a major turnaround on trade.

Just recently the U.S. approved China to export poultry to the U.S. and, in return, China lifted its ban on U.S. poultry. That came not long after Trump and White House officials promised that China would be buying $40 billion to 50 billion worth of U.S. agricultural products annually over the next couple of years.

Instead, the future is now looking bleak. As talks progressed over the past year, China has agreed intermittently to allow its importers to buy millions of tons of soybeans as demonstrations of good will.

That could be over, Glauber told Agri-Pulse.

“The amounts that were agreed upon to ship to China, the U.S. has already shipped and so there’s no unfilled orders right now,” he said. “To get new orders … China would have to agree to that. If this means no more soybean sales, then I think that would be a big blow to the U.S.”

Grant Kimberley, senior director of market development for the Iowa Soybean Association, spoke to Agri-Pulse after the last time Trump warned he might not end the trade war until late 2020 and Kimberley’s forecast was dire.

“On the demand side, the longer the trade war lasts, the more that our U.S. soybean export pace will continue to fall behind and ending stocks will grow,” Kimberley said in an August interview. “If the trade war continues into next year, we could see an excessive shift of acres into other crops which would could crest burdensome supplies of other crops.”

Whether it’s the U.S. tariffs on Chinese products or the Chinese tariffs on U.S. products, America’s farmers and businesses are feeling the pain. AFBF, the nation's largest producer group, issued a statement Tuesday afternoon calling on Trump to wrap up a deal with China.

"A trade agreement with a market as important as China’s must be a priority. Further delay in reaching an agreement would make it hard for struggling farmers to hold on in the face of rising bankruptcy rates," AFBF President Zippy Duvall said. "The more time that passes, the more difficult it will be to win back this important export market, regardless of any trade agreement."

Trump continues to say that China is paying the U.S. tariffs — not U.S. companies that pay the import taxes — and the Chinese are bearing the brunt of the trade war, but U.S. businesses and farm groups are crying out.

“We want and need to see a deal as soon as possible,” said National Retail Federation Senior Vice President David French. “The tariffs continue to hurt U.S. businesses, workers and consumers and are a substantial drag on the U.S. economy. Waiting another year to resolve the cost and uncertainty of the trade war is a bad deal not just for retailers and their customers but every segment of the economy from farmers who export their crops to small manufacturers who rely on imported parts and materials.”