Basse said one of the biggest factors is the rise of the “ABU” countries — Argentina, Brazil and Ukraine — which he projected are on track to account for a record 57% of global corn exports in the 2019-2020 marketing year. A recent Economic Research Service report said the U.S. "has recently seen its share fall below 40 percent and is expected to continue losing its competitive edge to lower cost producers."

“They’re combining technology with bigger crops,” Basse said of the ABU countries in an interview following his speech, adding that weak currencies in Argentina and Brazil are contributing to the woes for U.S. farmers.

Basse said he expected the ABU countries’ market share of corn will increase, calling Brazilian farmers’ planting of a winter corn crop after soybeans the biggest technological advance in agriculture in the last 10 years.

Without any large source of demand in sight, the U.S. farmer eventually "will have to get more aggressive on cost reductions if he wants to compete in the world landscape,” Basse said.

One value opportunity could be a carbon market where farmers would sell credits, but that is developing slowly, he said.

“How do you measure sustainability on a per-meter or per-acre basis?” he asked. The private sector needs to come up with an accepted method for measuring specific practices and reward farmers for employing those practices, instead of having the government set the standards, he said. 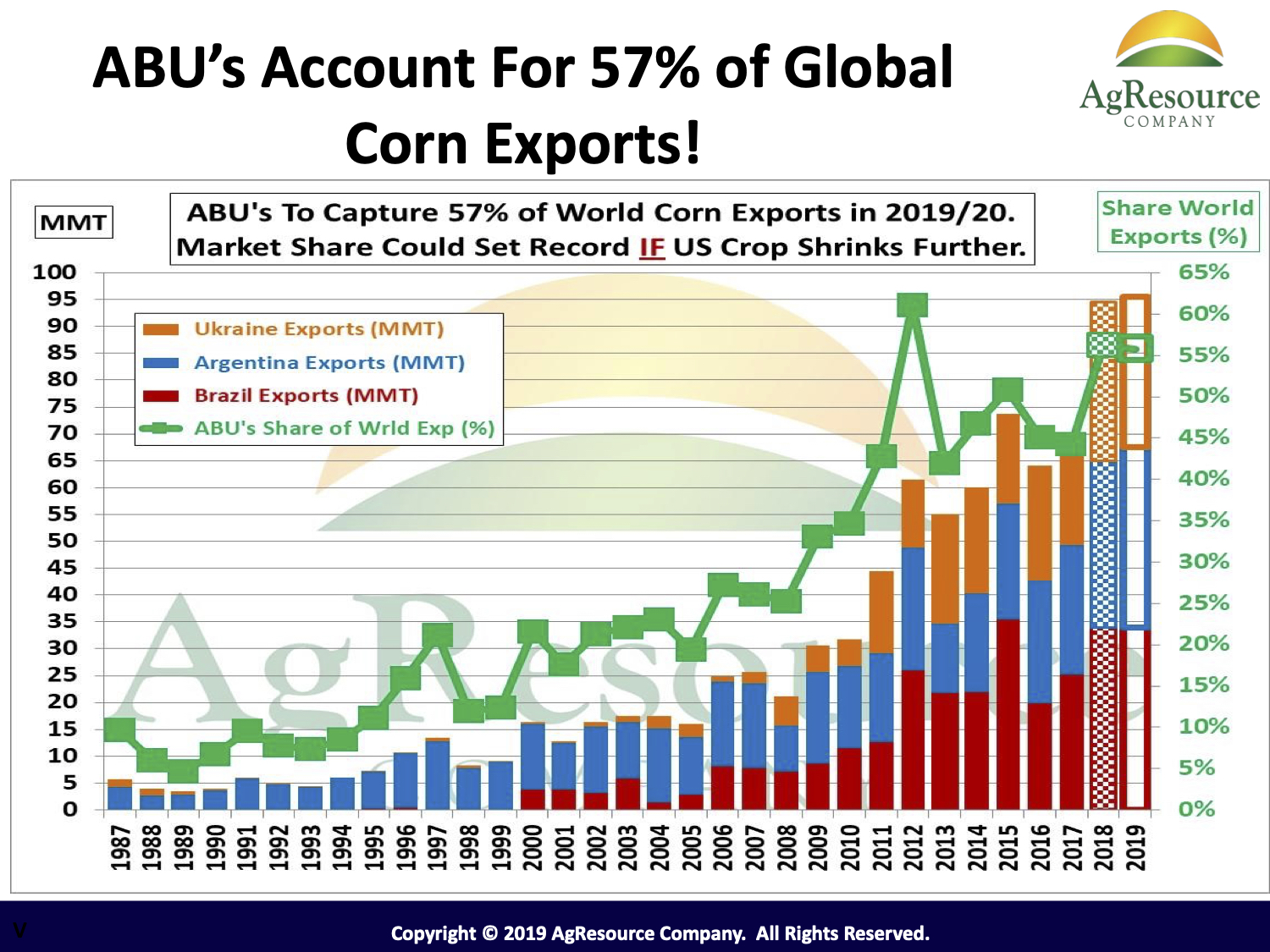 Without receiving a premium for adopting measures to improve soil health, for example, producers will be unwilling to change the way they farm, Basse said. “Right now everybody wants you to be sustainable, but they don’t want to pay the farmer.”

Profitability in the past two years has hinged on payments under the Market Facilitation Program to compensate farmers for the trade war with China. “U.S. farmers today are farming for the government,” Basse said.

He does not believe the World Trade Organization will step in now, but said he has heard “pushback from people in other countries who say [MFP] is market-distorting.”

Supply management in the U.S. — a solution proposed by some Democratic presidential candidates — could potentially boost crop prices, but “if you do something to cut grain stocks, it only lifts up farmers in other parts of the world,” Basse said.

According to USDA’s World Agricultural Supply and Demand Estimates report, global corn stocks, at 300.6 million tons, are up 4.6 million tons from last month.

Yet U.S. farmers remain optimistic President Donald Trump will work out a trade deal with China that could lead to $40 billion per year in ag purchases from the U.S., Basse noted, citing Purdue/CME’s Ag Economy Barometer. Some 57% of farmers surveyed recently said it was likely the soybean trade dispute with China would be resolved soon

Other observations from Basse: