Major farm groups are welcoming House passage of a landmark ag labor bill that would expand the H-2A visa program to year-round workers and give growers relief from the huge wage increases many have recently faced.

Senate Republican leaders, however, have given no indication that they will take up the Farm Workforce Modernization Act, and the White House has yet to get on board either. The bill got 34 Republican votes in the House Wednesday evening. But the 260-165 vote was short of the two-thirds margin that would be needed to overcome a presidential veto, even if the measure were to pass the Senate.

House GOP supporters of the bill have been working with Sens. Mike Crapo, R-Idaho, and Thom Tillis, R-N.C., on getting a bill considered in that chamber.

Take note: House Democrats clearly saw the bill as a political winner in key districts. House Speaker Nancy Pelosi went to the House floor to make an unusual personal appeal for the legislation, which would provide a path to legal status for undocumented farmworkers. 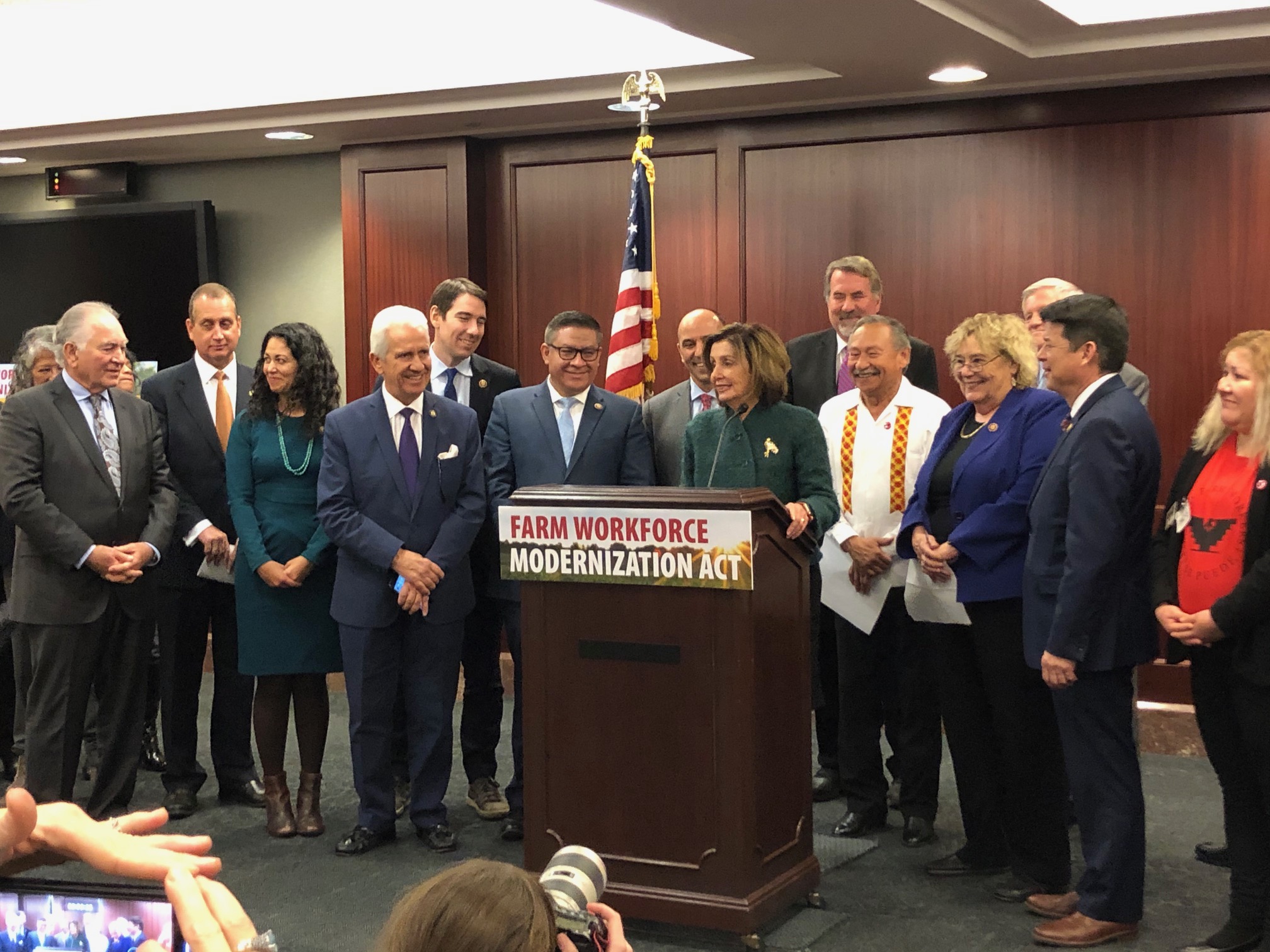 Speaker Pelosi with backers of the bill after the vote

Whither the Farm Bureau? The American Farm Bureau Federation declined to support the bill, although the California Farm Bureau lobbied for its passage. AFBF said in a statement after the vote, “We will turn our attention to the Senate where we hope legislation is crafted that provides long-term solutions to the farm labor crisis.

Only five Republican members of the House Agriculture Committee voted for the House bill: Jim Baird of Indiana, Mike Bost and Rodney Davis of Illinois, Doug LaMalfa of California and Glenn Thompson of Pennsylvania.

The Department of Water Resources is holding a public meeting this morning to gather feedback on a plan it drafted to apparently counter the federal biological opinions. The environmental report would govern delta pumping operations for the State Water Project.

The meeting is just two hours long, will not be recorded and takes place in a separate branch office in West Sacramento. It will also be the only hearing on the report, the minimum requirement for DWR.

Environmental advocates are mobilizing for the meeting.

Remember: The administration has been carefully navigating the contentious delta flows issue. According to Justin Fredrickson, a policy analyst for the California Farm Bureau, “there's not that much difference” between the state’s plan and the new biological opinions. The plan did anger conservation groups, however. Newsom also vowed to sue federal agencies over the biological opinions, which concerned ag groups and water districts. 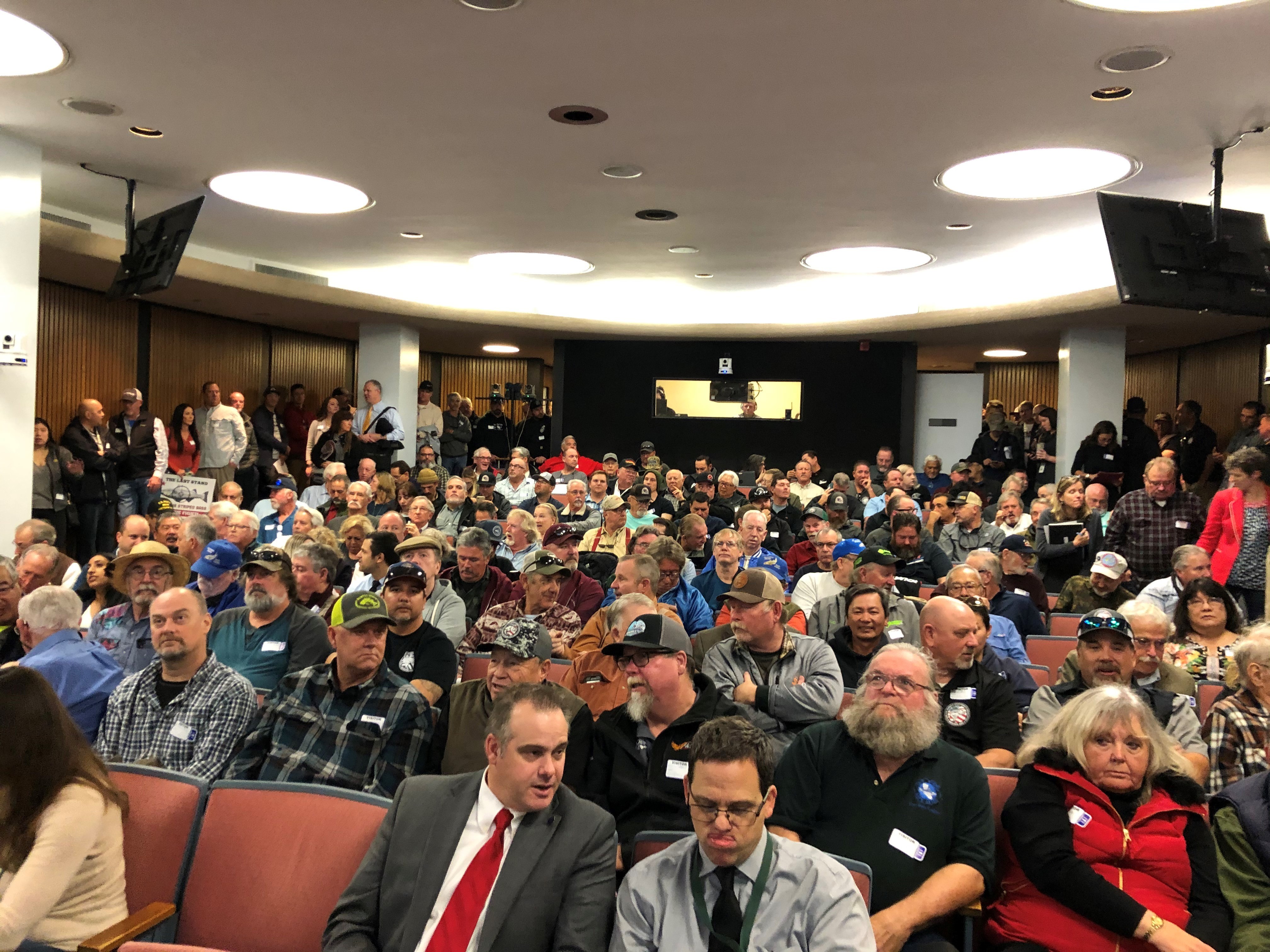 Sportfishing advocates filled the room. Photo by Democratic Asm. Jim Frazier, who represents the delta and sided with sportfishermen.

The Fish and Game Commission yesterday decided to delay a vote on policies for delta fisheries management and striped bass protection in the Sacramento-San Joaquin Delta. Farming groups urged the commission to continue negotiations over the striped bass policy in order to reach a consensus among stakeholders.

Several sportfishing advocacy groups mobilized dozens of members for the meeting yesterday. They argued the policy updates are a water grab by the California Farm Bureau, the Westlands Water District and Wonderful Co. President Stewart Resnick.

Representing farmers and other water users, Michael Boccadoro countered that the state should manage for outcomes, rather than to protect just one species.

“It's not about fish, farms or people,” he said. “It's about everybody – and there are 24 million Californians – who depend on the delta.”

On that note: The commission has also been advancing a petition to list mountain lions in Southern California and along the Central Coast as threatened under the California Endangered Species Act. The Department of Fish and Wildlife has been evaluating the action. The commission decided yesterday to provide CDFW more time for its report and will likely vote on the listing in March.

The State Water Board announced yesterday the members of a new advisory group to identify spending priorities for the new Safe and Affordable Drinking Water Fund.

Among the 19 members were Emily Rooney, president of the Ag Council, and David Cory, a farmer and attorney involved with CV-SALTS and several other Central Valley water quality programs. The group represents a broad range of stakeholders.

It will hold its first public meeting in January in Sacramento, followed by others across the state.

Remember: Gov. Newsom signed Senate Bill 200 this year to establish the fund and provide it with $130 million a year for the next decade.

Rooney, and others in agriculture, had championed an earlier drinking water bill. For funding, it would have levied a tax on all residents and businesses, as well as fees on fertilizer, dairies and confined animal facilities. In turn, it would have capped the rising water quality fees already imposed on ag operations. SB 200 relies mostly on cap-and-trade dollars, drawing funding away from climate smart ag programs.

Senate Finance Committee Chairman Chuck Grassley, who is in frequent contact with the White House, says he’s received word that a partial trade deal soon with China is looking more likely. “We could be possibly close to an agreement with China,” Grassley said on Fox Business.

Meanwhile, Agriculture Secretary Sonny Perdue says he continues to believe that the next round of tariffs – planned for Sunday – won’t happen, and the situation looks a lot rosier than last week when President Trump was saying a deal might not happen until after the 2020 elections.

Still, Perdue stressed that China is not fully living up to its goodwill pledge this year to buy 20 million metric tons of soybeans.

That may be so, but China is still buying U.S. commodities. USDA’s Foreign Agricultural Service announced Wednesday morning an export sale of 585,000 metric tons of U.S. soybeans to China for the 2019-20 marketing year.

American Seed Trade Association President and CEO Andy LaVigne is hopeful the potential trade deal with China includes provisions to fix the country’s biotech approval process, which hinders the commercialization of new traits in the U.S.

But he says he doesn’t know what will be included in the agreement. In October, U.S. Trade Representative Bob Lighthizer said the deal included biotech language that would make it “much easier” for American growers to export goods to China,” but offered no details.

“At this point we don’t know” what will emerge from the talks, LaVigne told Agri-Pulse on the sidelines of the ASTA/CSS Seed Expo Wednesday in Chicago. “We are hopeful that there will be a more certain process with China.”

Without the biotech language, “we’re stuck with an inability to bring new innovations to market in the U.S.,” LaVigne said.

“Striped bass were introduced into California in 1879 with explosive success.” – UC Davis Professor Emeritus Peter Moyle, testifying about the species at the commission meeting. Moyle has been studying delta fish for 50 years.

Ben Nuelle, Bill Tomson and Steve Davies (in Chicago) contributed to this report.