The biodiesel industry wants to substantially increase its production in the next decade, but industry officials say that growth will require both new and existing feedstocks as well as consistent, long-term government support through the biodiesel tax credit and annual biofuel usage mandates.

The industry's trade association - the National Biodiesel Board — has set an aggressive goal to boost production in the next decade to six billion gallons of biomass-based diesel. The industry currently produces between 2.5 and 3 billion gallons each year.

“It’s a vision, it’s a goal, no doubt about it but we’ve done our homework to figure out how we can get there with what markets are going to drive that six billion gallons,” Rehagen told reporters at NBB’s annual conference in Tampa, Fla., last week.

NBB argues the increase in biodiesel usage would eliminate over 35 million metric tons of CO2 equivalent greenhouse gas emissions on a yearly basis. (The average car  emits about 4.6 metric tons of carbon dioxide per year.) Rehagan also believes it is possible to reach 15 billion gallons of biodiesel usage by 2050. 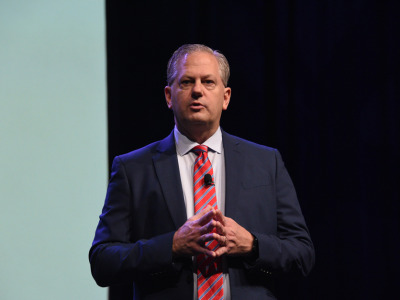 Scott Irwin, an agricultural economist at the University of Illinois, said that reaching six billion gallons by 2030 could be realistic with the help of renewable diesel, a product chemically identical to conventional diesel and often made from often made from animal fat or waste grease. But he also views the number as aspirational and says several factors will have to happen for that to work.

The biodiesel industry is also starting the year with a renewed sense of optimism after Congress passed the biodiesel tax credit, a $1-per-gallon credit for biodiesel and renewable diesel.

The group went into the beginning of last year with a huge amount of uncertainty not knowing if the credit would get extended beyond when it expired at the end of 2017. However, in a last-minute deal the credit was extended through 2022.

“The last two times the tax credit was in place at the beginning of the year, the industry expanded by about an average of 400 million gallons in that calendar year,” Kovarik said.

He said the number is significant in terms of economic impact, rural economy jobs, and added value to a bushel of soybeans.

Kovarik also hopes the credit will also allow nearly a dozen of shuttered biodiesel plants to come back online. After pausing production for two months, one of those restarted this past week.

Western Dubuque Biodiesel General Manager Tom Brooks told Agri-Pulse while he hasn’t always relied on the credit, he is glad to see it reinstated after a 23-month drought.

“We paused production in November and December of 2019 because the market was still waiting ... they thought the credit was going to come back in the summer; it didn’t,” Brooks said. “It didn’t come back in October and nobody was buying.”

Brooks expects the plant, which has an annual production capacity of about 30 million gallons per year, to be running at capacity this week.

“Lifting this cloud from the industry and providing this prospective three years of certainty — I’m hopeful these capital projects and expansions that (companies) have shelved will be put back into motion,” Kovarik said.

As far as expanding, Brooks said that will depend on several factors including if the Environmental Protection Agency increases volume obligations in the RFS, how many small refinery exemptions are granted, and if renewable identification number values increase.

For the last two years, the EPA has set the blending mandate for biodiesel at 2.43 billion gallons, frustrating NBB and other stakeholders for the lack of proposed growth.

In order to reach the six-billion-gallon target, the industry will have to heavily rely on existing feedstocks, said Alan Weber, a senior economic adviser to NBB.

“Part of our existing feedstock base is built upon protein demand specifically and so what we anticipate we’ll see into the future is a growth rate of soybean meal demand that is greater than soybean vegetable oil demand,” Weber told Agri-Pulse.

“Having a larger biodiesel market will actually help utilize those excess soybean oil supplies,” Weber said. “Because of that relationship between soybean oil and soybean meal — if soybean oil has a use ... it helps keep soybean meal prices in check.”

Weber said the industry will also look toward winter annual oilseeds to help increase use. He specifically mentioned some cover crops that "would fit between corn and soybeans and in theory allow a full season soybean crop so you wouldn’t have any yield drag.”