The National Cattlemen’s Beef Association hopes to address some of the industry’s longest-running issues in 2020, goals that will likely need the cooperation of an administration that is up for reelection in November.

With Washington set to shift its focus more and more to the 2020 election as the calendar inches closer to November, the group’s leaders are well aware of the need for quick action.

“We know that at a certain point here in a few months, these guys are going to turn into a pumpkin, and when they go home and get their heads back in those races, it’s going to be hard to do much of this really big legislation,” NCBA lobbyist Ethan Lane said in an interview with Agri-Pulse.

But the group still expects to see movement on a number of its key issues, including the alternative proteins it has dubbed “fake meat,” trucking concerns, and a voluntary approach to country-of-origin labeling. 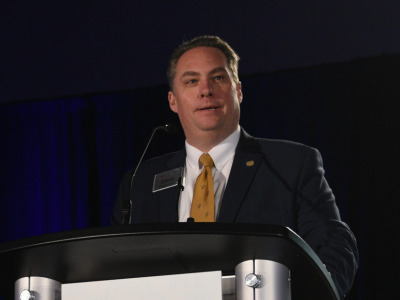 NCBA members passed a resolution supporting “USDA verification of any source of origin claim or label” and the use of those claims on a voluntary basis. The organization — and the beef industry more broadly — have been trying to determine the severity of concerns that foreign meat was undergoing additional processing in the U.S. for the sake of being labeled a “product of the U.S.A.”

NCBA trade lobbyist Kent Bacus said a working group of NCBA members investigated the issue and didn’t find “rampant or widespread” mislabeling, but the organization still wants to make sure that remains the case. But where NCBA diverges from other industry groups is that it plans to work through Agricultural Marketing Service Process Verified Programs rather than through the Food Safety and Inspection Service, something called for in a petition filed in October by the U.S. Cattlemen’s Association.

“FSIS should focus on food safety, and if it’s not a genuine food safety concern then we don’t need to stretch FSIS’ resources even further,” Bacus told Agri-Pulse. “We know that AMS has the ability to verify — through audits and everything else — these Process Verified Programs, and if it is truly a marketing claim, then we think AMS may be the better vehicle to enforce those.”

NCBA is also spooked by the potential of retaliatory tariffs from Canada and Mexico stemming from a WTO case settled in 2015 when the U.S. repealed its mandatory COOL law.

The group also approached product labels from another vantage point, focusing on survey results examining consumer understanding of plant-based meat alternatives such as Beyond Meat or the Impossible Burger. The survey showed 45% of respondents thought the plant-based products were entirely vegan, with the 55% remaining divided among the following responses: "Does not contain meat but may contain animal byproducts" (31%); "can contain small amounts of meat but is primarily plant-based" (17%), and "contains meat and there are no restrictions on the amount" (7%).

There also were long-form responses to questions about why images depicting cattle were included on plant-based packaging. The results, and NCBA’s broader efforts on the subject for the last couple of years, would give the organization a little more backing in a potential conversation with the Food and Drug Administration.

“We have every intent of going to FDA. We want to work with them in 2020 to see these products brought into compliance with the law,” Danielle Beck, NCBA’s lobbyist tracking the issue, told Agri-Pulse. “We’ve got strength in numbers. I think there are more and more animal protein trade associations, companies, looking at these alternative products out there. … They’re looking to engage.”

NCBA is also pushing legislation on Capitol Hill to address their concerns, but the so-called Real MEAT Act has yet to pick up any steam.

The organization is also using legislation to address their concerns over hours-of-service requirements for livestock haulers, but in the meantime is using an appropriations rider to delay implementation of a mandate to use electronic logging devices.

“We will be doing that until (the Department of Transportation) or Congress provides us some flexibility,” NCBA’s Allison Rivera said. She said the organization was hopeful a potential infrastructure package could include the language providing a 150-air-mile exemption from the beginning and end of an agricultural cargo hauler.

But that infrastructure package, despite getting a mention of support from President Donald Trump during his State of the Union address, is a long way off, as is any major legislative work. Lane says the group’s priorities might have to contend with a quiet year on the governing front.

“I think you should always be realistic about what’s possible in an election season like this,” he said. “But also, that should stop us from laying the groundwork for lame duck and the next session of Congress or the next administration, whether that’s Trump 2.0 or whatever else might be awaiting us in the future.”