The California Fish and Game Commission approved last week its first delta fisheries management policy and, over the protests of sportfishing groups, revisions to its controversial striped bass policy.

Commissioners argued the striped bass policy should not prioritize one non-native species over hundreds of endangered native fish populations. They also called the original population goals for species recovery arbitrary and not supported by science.

The actions should add more flexibility for the Department of Fish and Wildlife to respond to changing conditions in the Sacramento-San Joaquin Delta and more leeway for pump operators to move water during wet years.

The updates to the two policies received a broad base of support from farmers of varying interests within the delta region as well as north and south of the delta.

“The Farm Bureau is not looking to eliminate striped bass, but to have a better-managed Delta to benefit everyone,” said Noelle Cremers, a policy advocate for the California Farm Bureau Federation

Michael Bocadoro, who represented farmers and other water users, agreed, saying the state should manage for outcomes, rather than one species, and the approach of the two policies fall in line with Gov. Gavin Newsom's support for collaborative and voluntary agreements on water issues.

“It's not about fish, farms or people,” he said. “It's about everybody who depends on the delta – and there are 24 million Californians.”

Yet sportfishing groups and anglers had mobilized dozens of members and fought hard to maintain the striped bass policy that was adopted more than two decades ago, fearing that any changes would hurt charter fishing companies. After three years of stakeholder negotiations, the decision came as a disappointment. They called it a water grab by the California Farm Bureau Federation, the Westlands Water District and billionaire Stewart Resnick, the founder and president of The Wonderful Company. 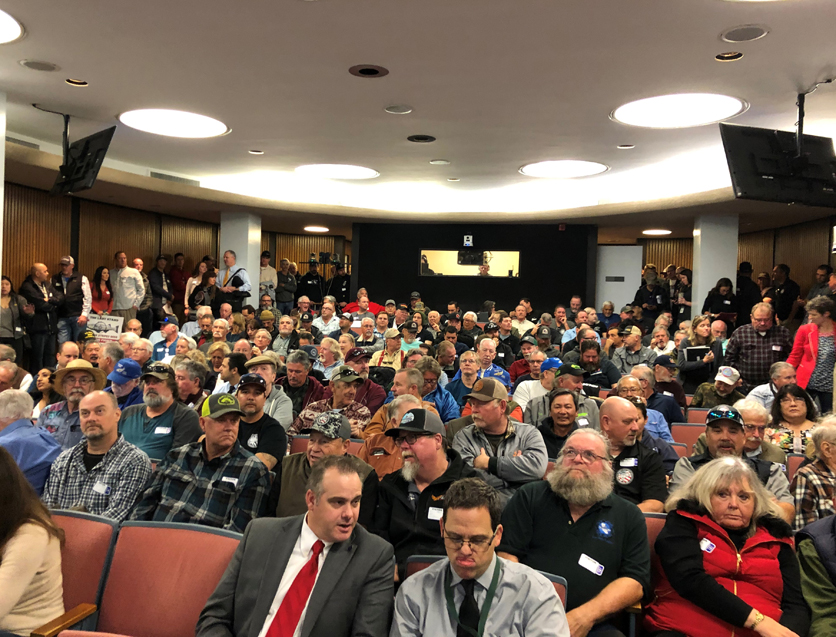 “There should be no change to the 1996 policy until the department has evaluated the status of the species and the availability of the habitat to support the species,” said David Ostrach, the science advisor for Allied Fishing Groups.

President Eric Sklar countered that it would be too expensive to study this species.

“It's not endangered and there are literally hundreds of other species that we have to address and study that are endangered,” he said. “Until last year we had virtually no money to do those.”

Assemblymember Jim Frazier, along with the 10 other legislators in the Delta Caucus, opposed the striped bass revision, urging more work was needed to reach a consensus. Sklar pointed to several engagement sessions throughout 2019 and said the commission must meet the needs of all of California, not just Delta interests.

Sklar also took aim at the original policy’s target goal of reaching a population of three million fish to maintain species and ecosystem health. Instead, he inserted language to ensure the “vitality” of the fishery.

“I'm not going to vote to put a number in there that's made up,” he said. “I want a number that comes out of the scientific process.”

Estimates had put the population at just 600,000 in 1994, which means three million is “likely not achievable,” according to CDFW.

Striped bass were first introduced to California in 1879 with “explosive success,” according to UC Davis Professor Emeritus Peter Moyle. He explained they serve as a good indicator species to understand ecosystem health.

Sklar and others emphasized that the policy does allow the flexibility to evolve based on new science and is not a firm regulatory plan, which pleased many of the stakeholders.

“While we aren't thrilled to death with the policies, we do recognize that it's been carefully crafted to serve as a guiding principle for balance and appropriate management,” said Gale Delihant, government affairs director for the Western Growers Association.