Commodity markets continue to skid and farmers are heading into planting season facing the prospect of a global recession spawned by the coronavirus pandemic that could further depress demand for key ag commodities, including meat and ethanol, economists say.

“We’ve had to walk a few people off the edge, so to speak,” said Lia Biondo, director of policy and outreach for the U.S. Cattlemen’s Association. Live cattle prices were already down 25% since January, when the “phase one” trade agreement was signed.

“I would imagine the farmer and rancher suicide hotlines are ringing off the hook," she added. "It doesn’t look good out there. It is absolutely unprecedented times.”

There are some reasons for hope amid the uncertainty about the U.S. economy: China is starting to recover from its outbreak, and other major Asian markets, including Japan and South Korea appear to have the virus in check.

But economists say while it’s true that people always need to eat, the pandemic and shutdowns could depress U.S. consumer demand for some commodities and create disruptions in supply chains because of worker shortages.

“The current event has the potential to be even more widespread (geographically) than the Great Recession and it isn’t clear to me it is limited to just the consumer demand impact,” Seth Meyer, a former top Agriculture Department economist now with the University of Missouri, said in an email. “We have impacts taking place along the supply chain as well.”

Jayson Lusk, an economist at Purdue University, warns in a blog post that consumers already are cutting back on restaurant eating, “and meat demand is typically thought to respond significantly to income,” meaning that it could fall during a recession. 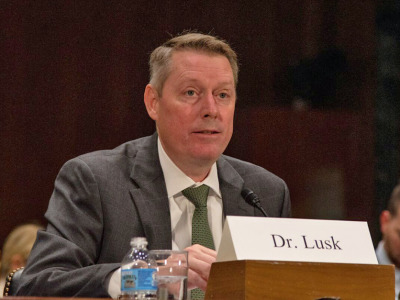 The 2009 downturn in the farm economy isn’t entirely analogous to 2020, in part because biofuel demand sent commodity prices spiking in 2008, driven in part by the U.S. Renewable Fuel Standard, which had been expended by the newly enacted 2007 energy law. The price of corn peaked around $8 a bushel in the summer of 2008 but tumbled under $4 by early 2009.

“At that point in time (in 2008) we were building up in the RFS there was a lot of investment money in commodities,” said John Newton, chief economist for the American Farm Bureau Federation.

The situation now is “very, very fluid,” Newton stressed, noting that one of the biggest concerns is whether supply chains, including processing and packing plants, could be disrupted by shortages of workers and other problems.

One of the concerns is that plant shutdowns could recreate a scenario like the fire at a Kansas beef packing plant last year that took 5% of the U.S. beef processing capacity offline.

“While the impacts was counter-intuitive to many producers, the economics were straightforward: an unexpected disruption in supply depressed cattle prices and boosted wholesale beef prices," said Lusk. "It isn’t far-fetched to imagine worker illnesses getting to the point that plants have to temporarily shut down on a scale that is at least as large as the August fire."

Another question is how commodity demand is affected as consumers shift from eating out to eating at home and to what extent they use home delivery. “What you get at steakhouse is way different than what you get at Whole Foods,” said Newton.

But several sectors already were seeing problems even before the federal government’s recent moves to restrict public gatherings and keep Americans at home to reduce the spread of the virus.

Beef and pork — The U.S. Cattlemen’s Association this week asked USDA for direct aid to deal with the slump in cattle prices.

"We know that to some extent, we along with everybody else in this country — every other commodity, every other industry — is to some extent along for the ride with the overall panic," he said. "But when we see the big demand that we have, when we see the product flowing and it’s not being translated into the producer price, it brings back the same concerns that we had from the Tyson fire a year ago, and we’re just going to have to continue to watch this play out.

"We don’t have any specific requests right now other than just making sure that the oversight which is already in place, that happens every day, is maintained," Woodall added.

The National Pork Producers Council is worried about worker shortages at both farms and processing plants, due in part to school closures. “The specter of market-ready hogs with nowhere to go is a nightmare for every pork producer in the nation,” said NPPC President Howard “A.V.” Roth, a Wisconsin farmer.

But for now, “People need to know we've got plenty of food in this country,” says Julie Anna Potts, President and CEO of the North American Meat Institute. She says her members, which include packers and processors, are seeing this “incredible upward retail demand” even as the food service demand has gone down.

“It's not one for one (replacement)for sure. But they are trying to ramp extra production for meeting the retail orders that are going up and up and up.”

Dairy — Because of a surplus of milk, processors have been paying as much as $5 to $6 per hundredweight under the Class III (cheese) price, said Ben Laine, a dairy analyst for Rabobank.

The closure of schools could reduce demand for fluid milk — 7% of fluid milk goes to schools — but it’s not clear how much consumption could shift to supermarkets with more consumers eating at home, he said.

For dairy producers, their average margin — the difference between feed and milk prices — has fallen from nearly $11 per hundredweight at the beginning of the year and is expected to reach about $8.50 by May, according to USDA.

Rabobank analysts will be closely watching to see how the impact of the coronavirus plays out over the longer-term. But on the retail level today, “dairy products are flying off the shelf and retailers are anecdotally telling us they’ve never had sales as high as what they currently have,” explains Mary Ledman, global dairy strategist for Rabobank.

“So, we actually have more milk flowing into fluid rather than cheese, butter and powder in the near term - which is good news because it’s less milk going into powder,” she says. “However, in the longer term (6 to 12 weeks out), the question is: do people have enough dairy in the refrigerator and will the run on milk continue?  She says that some of the consumption trends will be determined by how parents continue to shop when their children are out of school.

“We know that children drink more milk at home than they go to restaurants and, in this period of more health consciousness, dairy packs a lot of nutrition."

However, the administration is now considering appealing the decision, and a recession would likely depress gasoline consumption as motorists drive less. When consumers use less gasoline, they also use less ethanol.

Should gasoline usage fall by the expected amount over the next two months, the amount of corn used for ethanol production would fall by 120 million to 170 million bushels, according to University of Illinois economist Todd Hubbs. USDA has been projecting that 5.4 billion bushels of the 2019 crop would be used for ethanol.

Industry groups are stepping up the pressure on the Trump administration not to appeal the 10th Circuit ruling. “Given the robust financial assistance the Trump administration is planning to provide to oil producers, immediate actions to ensure EPA abides by these court decisions can help soothe concerns among those whose livelihoods depend on agriculture and renewable fuels,” said Geoff Cooper, president and CEO of the Renewable Fuels Association.