Negotiations on a massive new stimulus package are taking a new step today after Senate Republicans released their legislative proposal late Thursday evening. Democrats were quick to criticize the plan as inadequate.

The centerpiece of the GOP package is the promise of $1,200 per-person payments that phase out after $75,000 of income.

Keep in mind: There’s little in the plan specifically for agriculture. But with market prices continuing to decline for some commodities, pressure is growing on Congress to clear the way for another round of Market Facilitation Program payments or other aid.

Sources tell Agri-Pulse that lawmakers are working with USDA on a temporary increase in its Commodity Credit Corp. spending limit to $50 billion, up from $30 billion, which would enable another round of MFP payments.

But that limit increase is more likely to be included in a supplemental appropriations bill coming down the pike, rather than the stimulus package, sources say.

By the way: The ethanol industry is seeking some form of aid amid a plunge in prices. Geoff Cooper of the Renewable Fuels Association didn’t specify a number, but he said it would take about 6 cents to 8 cents for every gallon of production to cover labor costs. Read more here.

Take note: The scale of what Congress is being asked to do simply cannot be overstated. A separate request from business groups, including many in ag, is calling for the government to extend unsecured credit to businesses of all sizes – and to suspend all business tax collections. 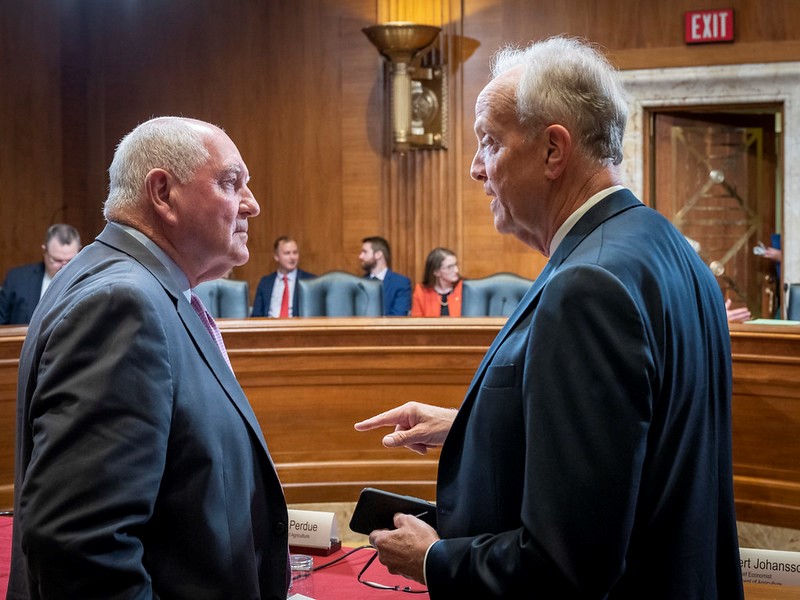 Three senators also are appealing to Agriculture Secretary Sonny Perdue to provide payments to cattle producers through MFP or another program.

The trio that signed a letter to Perdue includes two senior GOP members of the Senate Appropriations Committee, Jerry Moran of Kansas and John Hoeven of North Dakota, as well as Arizona Democrat Kirsten Sinema. Hoeven chairs the subcommittee that writes USDA’s budget.

Farm groups are welcoming new criteria from the Homeland Security Department for designating the agriculture and food sector as “critical infrastructure” in the fight against the spread of the coronavirus.

Employees who count as essential run the gamut from those in grocery stores and restaurant carry-out to processing plants, farms, food testing labs, government agencies and chemical and equipment manufacturers and distributors.

Why it matters: Among other things, this will help ensure these employees can get to their jobs during shelter-in-place orders. Read more here. 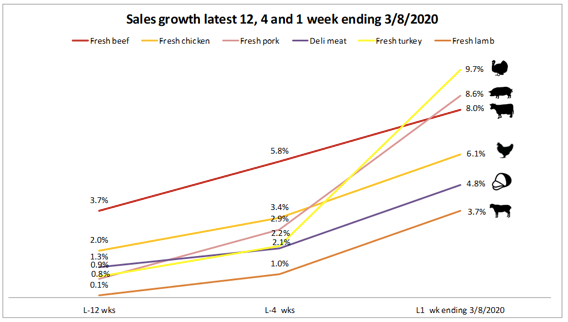 As more people telework from home – often surrounded by their school-aged children – they are stocking up on a lot of meat and poultry from food retailers. A new report by Anne-Marie Roerink of 210 Analytics indicates that sales have been ramping up over the last 12 weeks, and she expects them to spike even more by the time of her next weekly report – recognizing that more children are out of school.

During the week of March 8, fresh beef sales gained by nearly $40 million (up 8% over last year). Ground beef sales, which make up more than 40% of the beef category, were up 13.6% that same week, while fresh pork climbed 8.6% and turkey was up 9.7%. The full report was commissioned by the North American Meat Institute and is available here.

“Shoppers are returning to the familiar — putting meat back at the center of the plate,” notes Roerink, who describes the trend as “going back to comfort food.” She says retailers are working hard to restock, processing plants are ramping up capacity, and distributors are diverting supplies from food service to supermarkets.

By the way: This is the kind of event that keeps the industry on edge. The Port of Houston temporarily closed two container terminals Thursday after an employee who works at both facilities tested positive.

With much of USDA’s staff teleworking because of the outbreak, the USDA is reporting that its network is slowing down for some employees. One worker told Agri-Pulse that the private networks have been “exceptionally laggy and difficult to connect.”

Agencies within the department appear to be doing what they can to increase telework options. Headquarters employees with the National Agricultural Statistics Service have begun working at home.

“We are teleworking except when those preparing estimates and reports need to be in the office,” NASS spokesperson Sue King told Agri-Pulse. Headquarters staff began teleworking Tuesday, and field offices were due to begin telework Thursday.

China looking to buy US wheat?

Chinese buyers have been making inquiries about prices for hard red winter and spring wheat, although there have been no actual purchases yet, says Steve Mercer, a spokesman for the U.S. Wheat Associates.

Just the inquiries from China, together with a run on wheat products like bread in U.S. supermarkets, have been pushing up futures prices. The May contract for SRW wheat jumped more than 5%, or about 26.2 cents per bushel, Thursday according to CME data.

China, as part of the “phase one” deal with the U.S., committed to honor past pledges on tariff rate quotas for wheat, corn and rice. The TRQ for wheat that China agreed to when it joined the WTO is for 9.64 million metric tons per year.

Progress on poultry: The U.S. is rushing to meet China’s rising demand for poultry, shipping mostly chicken paws, leg quarters and other dark meat cuts popular in the Asian country. The situation at Chinese ports is improving and refrigerated containers of U.S. chicken are getting through to customers, USA Poultry and Egg Export Council president Jim Sumner tells Agri-Pulse.

He confirms that China and the U.S. have signed off on an agreement that the Chinese government will not overreact to outbreaks of avian influenza in the U.S.

According to the NWS Spring Flood Outlook, the central and southeastern portions of the U.S. have increased chances for flooding because of ongoing rainfall, highly saturated soil and above-normal precipitation expected this spring.

Areas at greatest risk for major to moderate flooding include the upper and middle Mississippi River basins, Missouri River basin and Red River of the North.

He said it. “We may see a little less vodka on the shelves at the liquor store, but we’ll get an increased supply of hand sanitizer coming to market over the next week to ten days,” – Chad Friese, general manager of Chippewa Valley Ethanol, saying beverage companies have been switching over to make hand sanitizer.