Agriculture Secretary Sonny Perdue says the U.S. food supply chain is intact despite the scenes consumers are seeing of milk being dumped and packing plants shutting down.

“I want to be clear – the bare store shelves you may see in some cities in the country are a demand issue, not a supply issue,” Perdue said at the White House coronavirus briefing Wednesday evening.

Heat’s on USDA as dairy sector looks for relief

Perdue is under pressure from every direction as farmers appeal for relief from the COVID-19 crisis. But nowhere is the pressure more intense than it is in dairy.

Among the options the industry has proposed is reopening enrollment for the Dairy Margin Coverage program. But that would be costly, and it could anger producers who signed up for the program when it appeared it was unlikely to provide any payments this year.

University of Minnesota economist Marin Bozic says at current prices, the farmers now enrolled in DMC at the Tier I level would likely collect $550 million. If enrollment were opened up and everyone eligible to sign up did so, payments could rise to $1.3 billion, he says. (The program paid out about $300 million last year.)

By the way: Based on the latest price projections for 2020, USDA estimates a producer with a production history of 5 million pounds will receive nearly $169,000 from DMC this year at the $9.50-per-hundredweight coverage level. The premium was just $7,100.

Perdue told Fox Business on Wednesday says he’s looking at making direct payments to farmers while also buying up surplus food as part of the $16 billion aid package being developed.

“We want to have direct payments to farmers, but more importantly ... we want to purchase as much of this milk or other protein products, hams and pork products, and move them to where they can be utilized in our food banks and possibly even international humanitarian aid,” Perdue said. 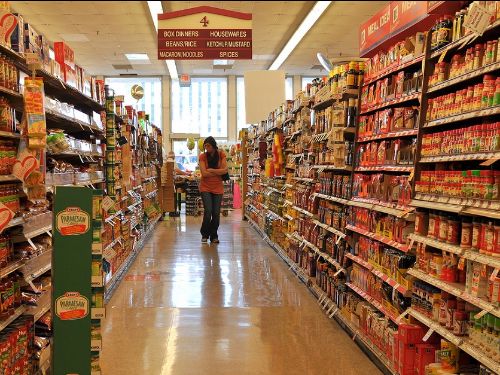 Supermarket giants Albertsons and Kroger have joined the United Food and Commercial Workers International Union in urging federal and state policymakers to designate grocery store workers as “extended first responders” or “emergency personnel.” That would give the workers priority access to personal protection equipment like masks and gloves.

“This urgent call … is not just about protecting grocery store workers; it is also about protecting the customers they serve and our nation's food supply in general,” Kroger and UFCW said in a statement. UFCW represents 1.3 million workers in grocery stores and retail shops as well as meatpacking, food processing and other industries.

The Trump administration is taking steps to increase the number of workers available to farms to hire under the H-2A visa program.

Under a temporary final rule, farmers who are having trouble getting H-2A workers into the country because of travel restrictions can hire workers who are already in the U.S. on H-2A visas. The Department of Homeland Security also will allow H-2A visa holders to work beyond the current three-year limit.

The American Farm Bureau Federation was still assessing the impact of the changes, but AFBF’s Allison Crittenden says they should “broaden the pool of workers eligible” to work this year.

As recently as last week, China was takings soybeans out of its strategic reserve stockpiles, but the country is expected to begin soon filling it back up, U.S. Soybean Export Council CEO Jim Sutter told reporters Wednesday.

“I would think they’d view today’s prices of soybeans as cheap,” Sutter said. “The Chinese are very astute in terms of when historically they put things into these strategic reserves, so I wouldn’t be surprised if sometime in the next few months we would see them start to put soybeans back into the strategic reserve.”

China is thought to have pulled roughly 10 million metric tons of soybeans out of its reserve over the past two years.

One of the potential benefits U.S. agriculture sees in a potential U.S.-U.K. free trade agreement is that Britain could pull away from the European Union’s restrictive biotech approval policies. But USDA’s Foreign Agricultural Service is warning that it may not happen.

While British Prime Minister Boris Johnson has made encouraging statements about liberating “the UK’s extraordinary bioscience sector from anti-genetic modification rules,” FAS says Britain is also holding FTA talks with the EU, and those ties remain tight despite Brexit.

“The EU is the UK’s largest trading partner and the UK will retain much EU food law for many years to come,” says FAS, stressing that British consumers tend to distrust genetically modified plants and animals.

A new Purdue University study suggests ethanol demand for corn could drop by anywhere from 600 million to 1.1 billion bushels this year if COVID-19 continues to keep drivers off the roads.

Cutbacks in ethanol production could range from 1.7 to 3.3 billion gallons this year, or 11% to 21% below 2019 production. As long as livestock producers substitute corn for dried distillers’ grains, the loss of corn demand would be on the low side, in the range of 423 to 803 million bushels.

By the way: According to Energy Information Administration data, ethanol production shrank 15% or 101,000 barrels per day, for the week ending April 10.

The Army Corps of Engineers is reviving a controversial proposal to build a pump to alleviate flood damage in the Yazoo Backwater Area in Mississippi.

Farmers in the area have sought construction of the project for many years, but in 2008 EPA vetoed a Corps Clean Water Act permit, citing damage to 67,000 acres of wetlands.

In a Federal Register notice published today, the Corps says it plans to prepare a Supplemental Environmental Impact Statement on the project. “In 2019, hundreds were displaced from their flooded homes for over six months and the entire crop season was lost for farmers in the affected area,” the Corps said.

Keep in mind: The Corps says new data show the environmental impact would be "much less" than it previously calculated, but environmental groups still oppose the plan.

He said it. "We recognize that you are the true patriotic heroes during this national emergency, along with our health care workers.” – Ag Secretary Sonny Perdue, speaking about employees in the food supply chain, from farmers to supermarket workers.