USDA’s $19 billion COVID-19 aid package for farmers easily eclipses any of the Trump administration’s previous trade assistance programs, but the plan may fall well short of compensating producers from the estimated damage of the pandemic.

The package, which includes $3 billion in USDA purchases of meat, produce and dairy products as well as $16 billion in direct payments to producers, will test the department’s ability to follow through on a novel plan to distribute those USDA-purchased commodities to needy people while sidestepping the staffing and refrigeration challenges facing food banks.

The commodity purchasing plan will rely on distributors who can package household-size boxes of meat, chicken, fresh milk, dairy products and produce and take them by truck to food banks and other nonprofits where the food will be handed directly to recipients.

Many key details of the overall aid package aren’t known yet or haven’t been confirmed by the department, which will release a rule for the payment program later.

USDA, for example, hasn’t released rates for the payments that will be going to growers and livestock producers. The American Farm Bureau Federation also noted that it isn’t clear what price series will be used for some commodities. 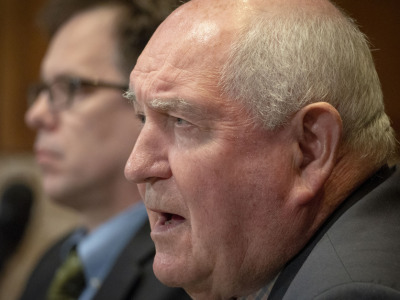 There is also too little known about the ultimate impact of the COVID-19 crisis to know the extent that the aid package will offset the damage to producers. In developing the package, Agriculture Secretary Sonny Perdue said USDA relied in part on an analysis done by the Food and Policy Agriculture Research Institute at the University of Missouri.

FAPRI on April 13 released an estimate that net farm income would be $20 billion lower this year because of the pandemic. The $16 billion in direct payments to producers of livestock, row crops and specialty crops, would go a long way toward making up that loss.

But FAPRI Director Patrick Westhoff says the estimated loss is likely already higher due in part to packing plant closures that are “pushing down livestock prices more than we anticipated, especially for hogs.”

Milk prices also have fallen more than FAPRI estimated due to the closure of schools and other market losses, and the hit to the ethanol industry also will be worse than expected “unless driving pops back to normal very soon (which now seems quite unlikely),” he said in email.

This aid package isn’t expected to be the last in any case. Starting in July, USDA will have more money to spend. The $2 trillion economic stimulus bill enacted in March and known as the CARES Act provided $14 billion to replenish USDA’s Commodity Credit Corp., account. The money becomes available in July.

While the $19 billion relief plan “is an important down payment in making agriculture whole from the unprecedented and unexpected economic fallout related to COVID-19, more help will be needed as the full extent of the crisis becomes known,” Michael Nepveux, an economist with the American Farm Bureau Federation, said of the aid plan.

Advocates for local and regional agriculture are unhappy that USDA has not yet detailed specific assistance for that sector.

The plan as outlined so far only specifies there will be $500 million in direct payments for “other crops” beyond the row crops eligible for payments.

“Those payments are required by law but, at least to date, do not appear in any summary of the package we have seen. Direct local and regional sales are very different from commodity markets, with very different pricing,” said Ferd Hoefner, an adviser to the National Sustainable Agriculture Coalition.

Here is a look at how the package shapes up for each ag sector, based on the information made available so far:

USDA has committed to spending $100 million a month buying dairy products, produce and pork and chicken.

The food box delivery plan has echoes of Perdue’s “Harvest Box” proposal, which called for a portion of benefits to be used for prepackaged boxes delivered directly to SNAP recipients.

Because food banks are facing soaring demand at a time when they also are short of volunteers because of the virus, USDA envisions distributors trucking the food boxes to each site so that they can be immediately loaded into the recipients’ cars. The direct distribution also would address the lack of refrigeration faced by many food banks.

USDA is seeking to ramp up its plan on an incredibly ambitious timetable; potential participants were learning key details on a Zoom call organized by USDA's Agricultural Marketing Service on Tuesday afternoon.

Detailed proposals for distributing the boxes are due in to AMS by May 1. USDA is expected to award contracts by May 8, and the program
is supposed to be fully operational by May 15. The boxes are ideally supposed to contain a mix of eligible products, all produced in the United States.

Robert Guenther, senior vice president of public policy for United Fresh Produce Association, said the industry needs to "lean in and support this effort and show the diversity and ingenuity of how our supply chain can work with the federal government to get our delicious and healthy products to those most in need.”

The $16 billion in direct payments includes $3.9 billion earmarked for row crops, whose market price has dropped at least 5% from January to April. Corn, soybeans and cotton all easily meet that test.

Corn growers have already lost $4.72 billion alone this year, according to FAPRI's analysis, which estimated that the price would average $3.35 a bushel this year, a forecast that now may be high given the widespread shutdown of ethanol plants; “$3.35 is optimistic,” said Purdue University economist James Mintert.

While the payment rates were not released, the payments will be calculated based on losses before and after April 15, according to information released by Sen. John Hoeven, the North Dakota Republican who chairs the Senate Agriculture Appropriations Subcommittee. 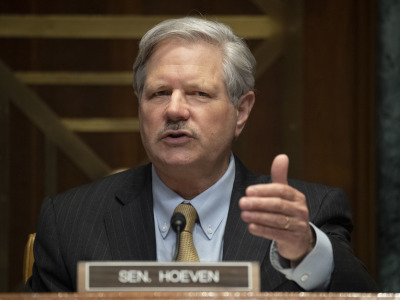 Losses from January through April 15 will be compensated at 85% of the price loss during that period; losses after April 15 through the next two quarters will cover 30% of expected losses.

Ethanol was notably left out of the package, and the administration is already under pressure from Iowa officials to provide payments to the industry.

“The industry, due to repeated attempts by this administration to undermine the RFS, has been operating at the thinnest of margins, if at all, and cannot be left behind,” the three Iowa Democratic House members said in a joint statement. Two of the three, Cindy Axne and Abby Finkenauer, are running for re-election in races and are being targeted by Republicans for defeat.

USDA will provide $9.6 billion in direct payments to cattle, dairy and hog producers, but the department hasn’t said how that will be divided up.

FAPRI estimated cattle producers had lost $9.6 billion due to the COVID-19 crisis, while the dairy and hog sectors lost about $4 billion each.

Each of the sectors argue that the damage is far greater. Cattle groups have estimated they’ve suffered up to $13.6 billion in damages.

Chicken producers are ineligible for payments but will benefit from USDA purchases. Tom Super, a spokesman for the National Chicken Council, said it was too soon to determine whether direct payments would be needed because of production cuts that would lead to reduced flock placements with farms. That potential economic harm “hasn’t materialized just yet and has only begun to be quantified,” he said.

Also left out of the package was any kind of a supply management program, and Perdue declined a request from the National Milk Producers Federation to reopen enrollment in the farm bill’s Dairy Margin Coverage program.

NMPF and the International Dairy Foods Association jointly proposed making payments to dairy producers to reduce production and to processors to keep buying milk. USDA made no mention of making such payments. "We’ll continue conversations with our membership and policymakers about policy paths forward as we learn more about the details of the package put forth last week," said NMPF spokesman Alan Bjerga.

Perdue said allowing farmers to sign up for DMC after they declined to do so last fall would set a bad precedent.

Specialty crops are eligible for $2.1 billion in direct payments to growers and grower-shippers, and there also is a commitment to relieve the debts of fruit and vegetable buyers for losses covered by government payments.

The industry, which is making clear it will be seeking more funding, had asked for $5 billion in compensation for growers and distributors whose crops were lost after sales to restaurants, schools, restaurants and other food service destinations were lost.

Dave Puglia, CEO of the Western Grower Association, describes the USDA package as a “very limited and conditioned first injection” of aid.

Florida growers alone “have suffered $520 million in losses” this spring, said Mike Joyner, president of the Florida Fruit and Vegetable Association. Potato growers say that 60% of their $4 billion in sales go to food service, and Kam Quarles of the National Potato Council called the $2.7 billion a “down payment.”