A backed-up food supply chain and a bottlenecked legislative process await senators as they return to Washington next week, and the desires for the next round of coronavirus assistance are already piling up.

Almost immediately after the “phase three” CARES Act was passed in March to spend more than $2 trillion on economic recovery, with $23.5 billion aimed at food and ag spending, lawmakers and lobbyists alike spoke of an expected fourth round of assistance. Now, with the implementation of that bill lingering and holes in the ag assistance starting to be revealed, some lawmakers are voicing their wishes for the next round of assistance and showing their frustration with the current state of play in farm policy.

“I am sick and tired of answering questions that I can’t answer,” House Ag Committee Chair Collin Peterson, D-Minn., told reporters Tuesday. He said he’s fielding phone calls from everyone ranging from producers in his district to actor Richard Gere with questions about the current state of the food system.

Peterson said he would oppose efforts to boost funding to USDA’s Commodity Credit Corporation if Congress was not given more say over how the money was spent and leaders of the ag panels did not authorize the spending. He’s also pushing for creation of a disaster program that can respond to any future crisis, and an investigation into the commodity procurement process, as he wonders if routing those purchases through the Supplemental Nutrition Assistance Program and grocery store infrastructure might be more efficient.

Another push for the upcoming legislation could be impacted by an executive order announced Tuesday by President Donald Trump to use the Defense Production Act to require meatpacking facilities to remain open during the outbreak, despite sometimes contrary orders from state and local governments. Many plants have shuttered after outbreaks among their employees, leaving producers wondering where they might take animals ready for harvest.

For some, the answer is nowhere, and the animals must be euthanized. Peterson and Sen. Chuck Grassley, R-Iowa, both spoke with reporters Tuesday about a push to indemnify producers forced to depopulate their herds, but indemnities haven’t been put in place yet. Peterson said USDA Undersecretary Greg Ibach said existing authorities only allowed for indemnities to sick animals.

As for other priorities, Grassley said he plans to continue to push for help for the ethanol industry, including two priorities the sector emphasized in the CARES Act debate. Then, Grassley pushed at the behest of ethanol groups for subsidization of ethanol blending stock and a loan guarantee for a pipeline. Those requests were based on a philosophy of equal treatment if oil companies were to receive assistance, which Grassley said didn’t happen in the last bill. 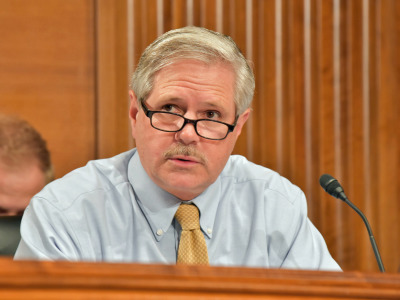 “None of that happened, so there wasn’t the need for equity for ethanol,” he said. “Those ideas have popped up again.”

“We haven’t come up with something, but clearly that is something that is under discussion,” he said.

There’s also the matter of payment limits, which many lawmakers would like to see lifted from the current $125,000 per commodity and $250,000 per entity limits included in the USDA aid package. In addition, commodity groups are pushing for more support, and a growing number of unemployed are seeking food assistance as the COVID-19 pandemic continues to linger.

But the House and Senate may be on different timelines for what comes next. Hoeven said he expects Senate Republicans to take a “wait and see” approach to study the effectiveness of some programs already put in place by previous recovery bills. Peterson, however, wants aid to get to producers hit by unexpected challenges. He said the $14 billion in CCC money in the last bill — money that can’t be spent until July 1 — might come too late.

“If this goes on and we can’t get these plants open, we’re going to have a lot of farmers go bankrupt,” he said, “and they’re never going to come back into business again.”