Farm Bureau town hall talks of ‘potholes’ in road ahead

The California Farm Bureau hosted a town hall discussion this week on the economic impacts of the COVID-19 pandemic. Asm. Susan Eggman and Sen. Cathleen Galgiani, who both chair ag committees, joined three economists in the conversation.

The center of the grocery store has benefited most from the surge in demand, said Roland Fumasi of Rabo AgriFinance. But most California products are in the produce or dairy aisle. Also, the panic buying in March did not balance the checkbooks for many farmers, since much of California production had not yet ramped up.

With the state seeing $20 billion in farm exports last year, UC Davis Professor Dan Sumner was concerned about income losses around the world. “That means we're likely to be consuming more of our products in the U.S., as export markets aren't there,” he said.

Restaurants will continue to struggle after reopening, warned CoBank’s Dan Kowalski. Before the lockdown, 40% of consumer spending in this sector was made by those over the age of 55 – one of the most vulnerable groups to COVID-19. “That demographic obviously is going to be slow to return to restaurants and cafes until a vaccine is available,” he said.

With labor, laid-off construction and hospitality workers have been pivoting to agriculture, pointed out Fumasi. But Sumner cautioned that while that has added temporary relief for growers, “it's not a panacea.”

Increasing or even doubling food stamp payments for vulnerable women and children to spend on California products was an idea both Eggman and Galgiani supported. But with the state facing a budget crunch, more federal funding would be needed, Eggman worried.

Looking to California’s unique ag landscape, Farm Bureau President Jamie Johansson saw hope: “We have this incredibly diverse agricultural system," he said. "It is the diversity that will help us recover faster.” 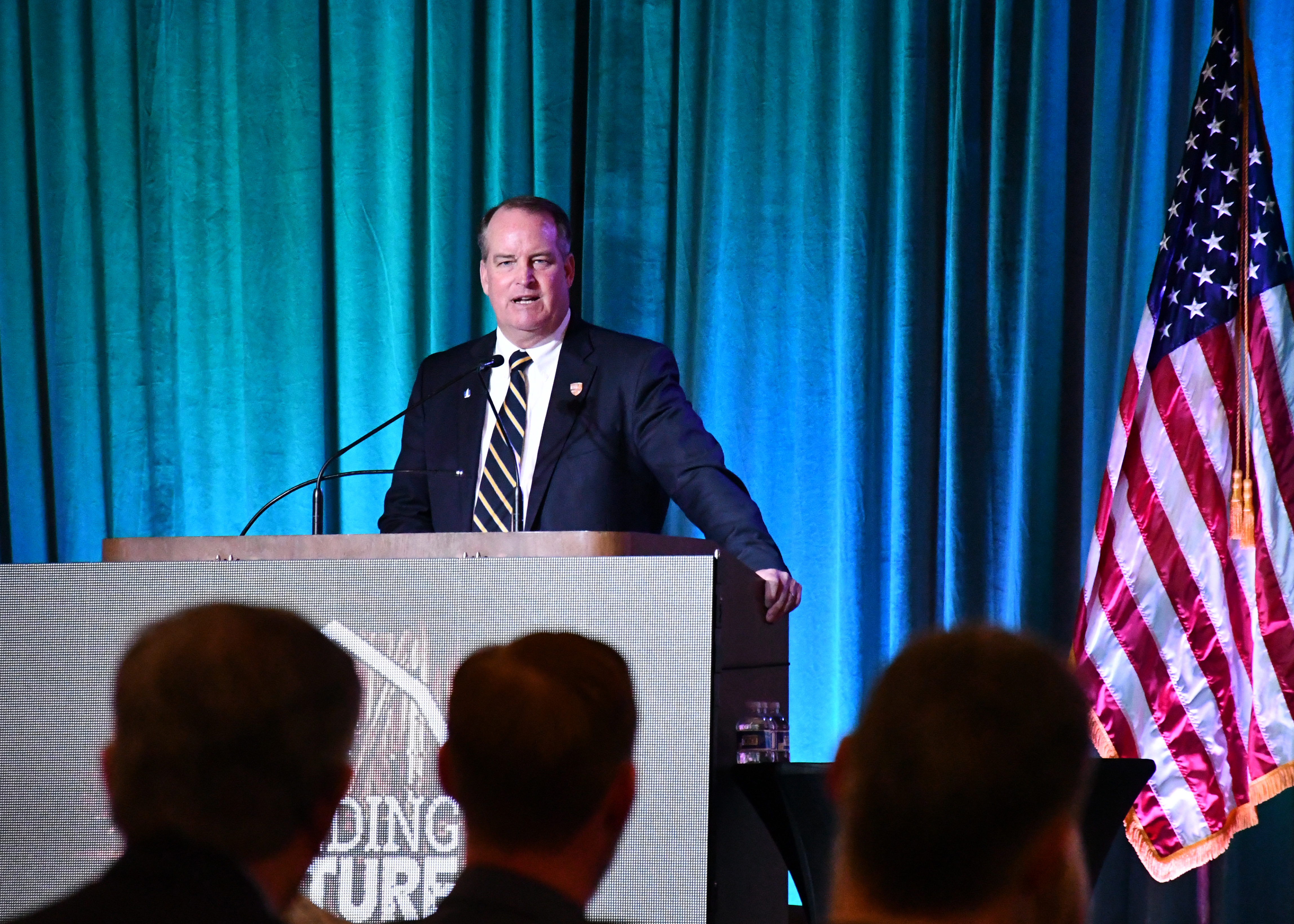 A proposal to tax sugary beverage distributors returns to the Legislature

After a failed attempt last year, Asm. Richard Bloom is back with a similar proposal to tax sugary beverages. Bloom cannibalized a bill this week to create a measure that would levy a tax of two cents per ounce on distributors of sugary drinks.

Some of the revenues generated would go to farm-to-school programs to support local farmers and reduce greenhouse gas emissions and to CDFA’s Farm to Fork office for “health equity” grants. It would also allocate a certain percent to small specialty crop producers who supply nutritious fruits and vegetables.

The bill also points out that sugary drinks do not satisfy daily calorie needs the way milk or plant-based proteins do.

President Donald Trump’s historic move to ensure meatpackers stay open is being cheered by producers who are facing a collapse in livestock prices and, in some cases, having to kill their animals. But the industry will be closely watched to see whether the action creates more outbreaks, which have killed at least 20 packing plant workers.

The executive order released Tuesday night authorizes USDA to “ take all appropriate action” to ensure that packing plants stay in operation “consistent with guidance” issued by CDC and OSHA on Sunday for protecting workers form the COVID-19 virus.

In a statement, USDA said it would work with packers “to affirm they will operate in accordance with the CDC and OSHA guidance, and then work with state and local officials to ensure that these plants are allowed to operate to produce the meat protein that Americans need.”

Zippy Duvall, president of the American Farm Bureau Federation, says he hopes the president’s action “will protect the health and safety of workers while keeping farmers and ranchers in the business of providing food for families across America.”

The top Democrat on the Senate Agriculture Committee, Debbie Stabenow, criticized the president’s intervention, saying he had failed to put forward a plan to adequately protect workers. Worker protection guidelines issued Sunday by OSHA and CDC aren’t mandatory. “Instead of using the Defense Production Act in a way that could put workers at risk, it should be used to produce supplies that will protect employees and our nation’s food supply,” Stabenow said.

Iowa GOP Sen. Chuck Grassley welcomed the order but said in a tweet that packers should follow the CDC/OSHA guidance and that the government should help them get personal protection equipment and testing capability. 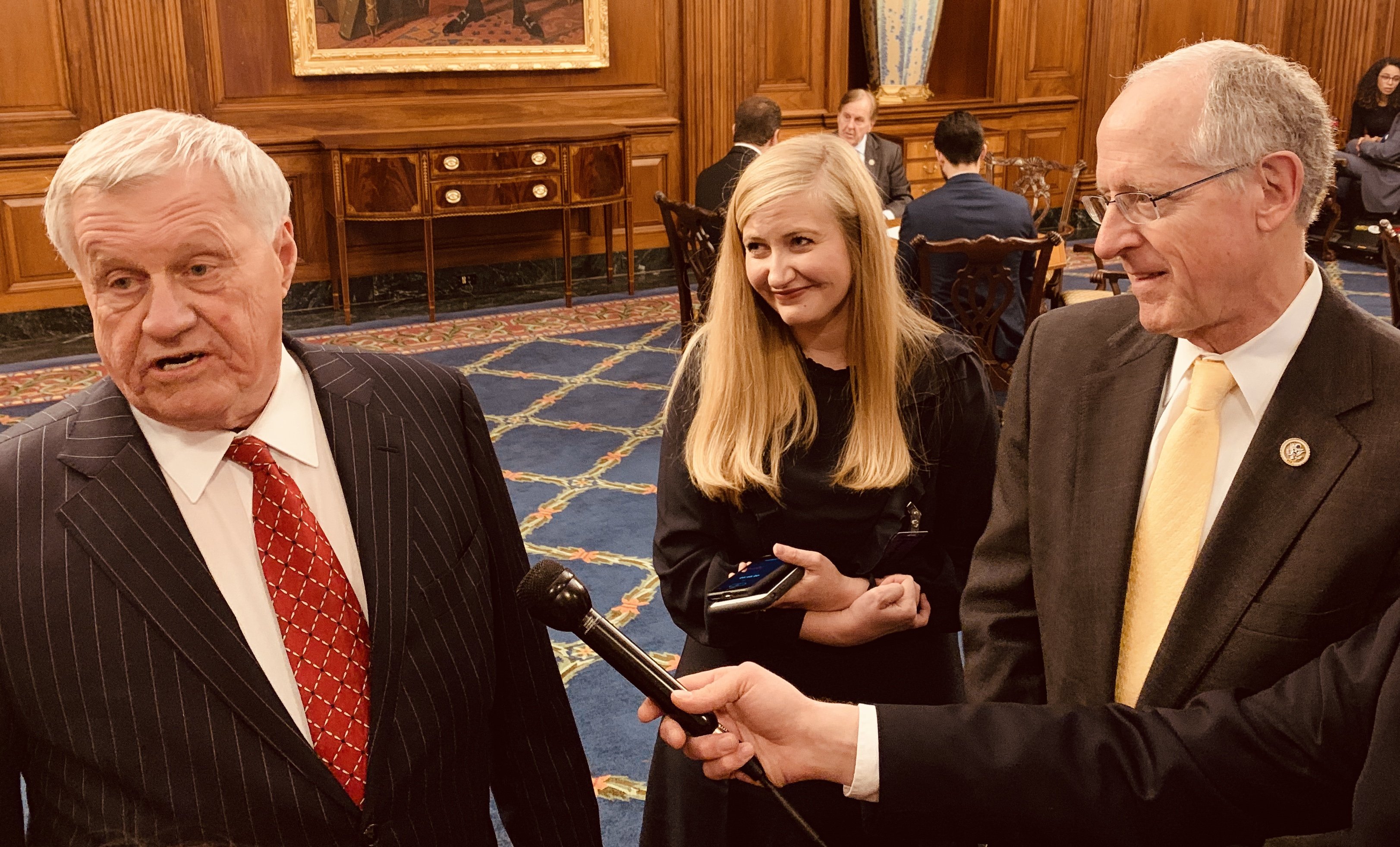 House Agriculture Chairman Collin Peterson is promising to conduct a “top-to-bottom” review of how the crisis is being handled to develop a plan for responding to future outbreaks.

"We’re going to question everything that’s going on,” the Minnesota Democrat told reporters on Tuesday. He said he wants to direct money to develop a “FEMA-type plan that’s ready to go when we hit the next crisis.” FEMA is a reference to the Federal Emergency Management Agency.

He went on, “Everything is going to be on the table. Things are not going to be the same.” He suggested the next crisis is likely to be African swine fever, the disease that decimated Chinese pork production last year.

Take note: Peterson also says he won’t sign off on more funding for direct farm payments unless the agriculture committees have a say in how it’s spent. “There’s not going to be a bill to give (USDA) 50 billion without any strings attached,” Peterson told reporters. Read our story here. 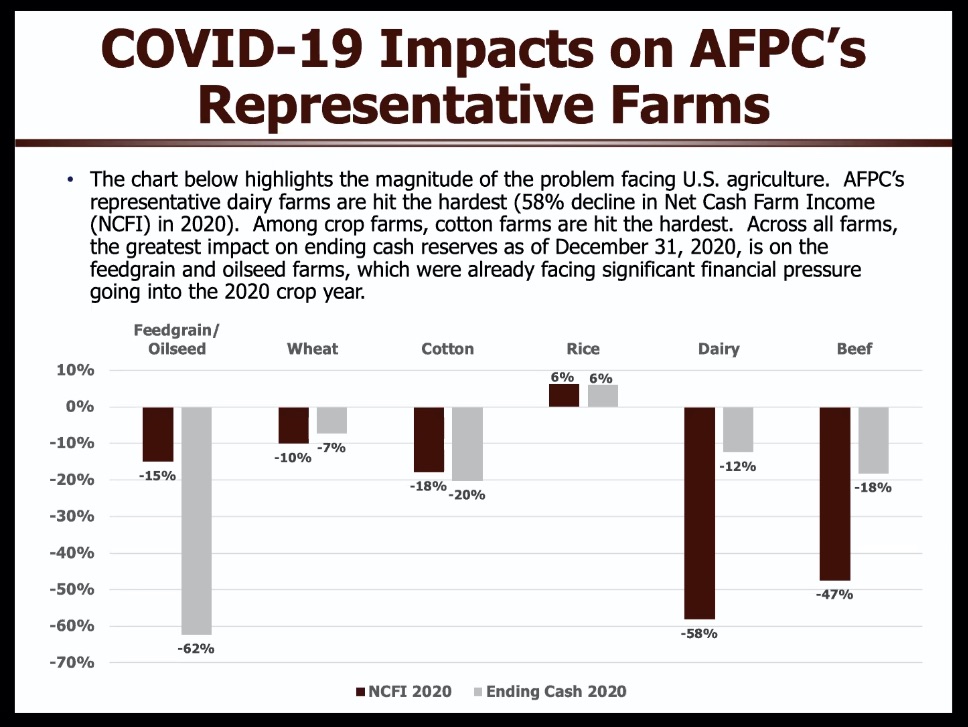 A new analysis from Texas A&M University puts some fresh numbers on the damage that the COVID-19 crisis is doing to U.S. agriculture. The analysis, based on A&M’s database of representative farms, estimates net cash income for dairy operations will fall 58% this year because of the pandemic, while beef earnings will drop 47%.

Net cash income will drop 18% for cotton growers and 15% for feed grain and oilseed producers, according to the analysis presented by A&M economist Bart Fisher at a Texas Ag Forum webinar.

Payment limit impact: The analysis also indicates that the proposed payment limits for USDA’s upcoming pandemic relief payments will hurt a variety of dairy farms across the country. Each recipient would be limited to $125,000 per commodity.

Larger farms in Texas and Idaho, with 3,800 and 3,000 cows respectively, are projected to lose more than $1.2 million in net income.

Take note: Texas Rep. Mike Conaway, the top Republican on House Ag, said earlier on the webinar that the payment limit is “unworkable.” “We’ve shared that with” Ag Secretary Sonny Perdue. “He understands it.”

China lagging in ‘phase one’ pledges

China has made some substantial purchases of U.S. soybeans, corn, wheat and beef in recent weeks. But the country is going to have to buy a lot more at a much quicker pace to even come close to honoring the import commitments it made under the “phase one” trade deal, says former USDA Chief Economist Joe Glauber. He’s pessimistic that China will do it.

The agricultural research funding drought must end, a new report from the Supporters of Agricultural Research (SoAR) Foundation says, citing examples of how targeted federal grants have helped to increase blueberry production, make wheat and barley adaptable to warmer weather, and identify a gene in pigs resistant to porcine reproductive and respiratory syndrome.

“Innovations developed today will feed our nation and the world for generations,” SOAR President Thomas Grumbly said. “But scientists need grants to cultivate those advances. We need to keep researchers hard at work now more than ever.”

SOAR pointed to funding levels for the Agriculture and Food Research Initiative, “USDA’s flagship program for competitively awarded research grants.” Authorized at $700 million in the 2008 Farm Bill, SOAR said “budget politics every year prevent the program from hitting that level.”

“We have a lot of seasonal migrant farmworkers now coming into the state of California. We’re working on protocols and procedures for PPE in that sector as well.” – Gov. Newsom, at his daily press briefing yesterday.