USDA is using its authority under President Donald Trump’s new executive order to require meat processors to prove that they are taking proper steps to curb coronavirus outbreaks.

In a statement to Agri-Pulse Wednesday evening, USDA said companies will have to “provide written documentation of mitigation plans for review” by a USDA-led them that will include representatives of the Labor Department and the CDC.

The officials will “swiftly review” the documentation provided with the state and local authorities to resume and/or ensure continuity of operations at these critical facilities.”

Keep in mind: The order also seems to give USDA some authority to procure personal protective equipment and COVID-19 tests, something everyone in the food supply chain has struggled to get. The department didn’t say what it would do about that.

John Dillard, an attorney with OFW Law, believes the order authorizes Agriculture Secretary Sonny Perdue “to acquire PPE, face coverings, and potentially testing capabilities to food plants. We should be hearing more about that in the coming days.”

Perdue has asked House Ag Committee Chairman Collin Peterson to get together a working group to address the closing of pork plants and resulting euthanasia of hogs in Minnesota, Iowa and South Dakota.

Peterson said he spoke with Perdue for about 30 minutes Wednesday morning about the current state of the food system with a focus on packing plants. Producers are concerned they’ll be forced to depopulate their hogs rather than sending them to a packing plant.

Peterson said Perdue had prioritized the JBS pork plant in Worthington, Minn., the Smithfield plant in Sioux Falls, and the Tyson plant in Waterloo, Iowa for reopening.

By the way: Peterson says the Worthington plant has begun euthanizing hogs as previously planned, but not at the rate they originally expected. Earlier this week, he said they hoped to process about 13,000 hogs per day. On Wednesday, he said they had lowered that estimate to about 3,000 due to trucking concerns.

The COVID-19 pandemic is interfering with the implementation of the “phase one” trade deal, but China remains committed to living up to promises made in the pact, including billions of dollars’ worth of agricultural purchases, a senior official at the Office of the U.S. Trade Representative said.

USTR has been “talking steadily with the Chinese to make sure that they stay on track to make the purchases,” the official told reporters.

China may be making assurances, but the country will have to import a lot more soybeans, sorghum, wheat, corn, pork and other commodities at a much quicker pace to meet its promised goal of buying $36.5 billion worth of ag goods by the end of the year, former USDA Chief Economist Joe Glauber said Monday. Chinese data shows the country only imported $5 billion worth of ag products in the first quarter. 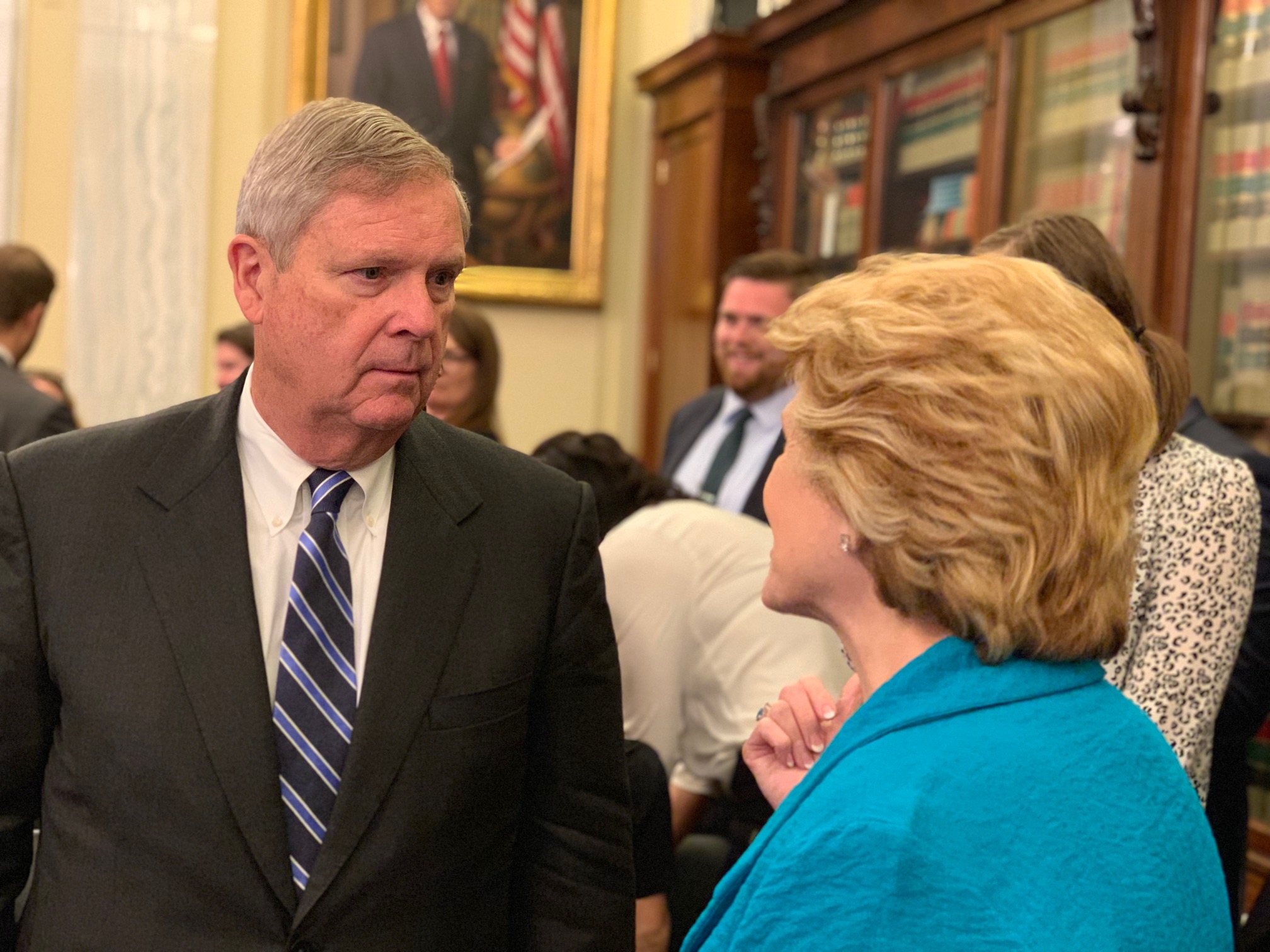 Vilsack to USDA: Bail out biofuels

Former Agriculture Secretary Tom Vilsack is calling on USDA to help ethanol producers the same way he bailed out the cotton industry in 2016.

“We looked for a creative way to use the Commodity Credit Corp. to provide assistance for the processing of the cotton ... to reduce the cost and to provide support for cotton growers,” Vilsack said on a Focus on Rural America webinar Wednesday with Iowa Democratic Rep. Abby Finkenauer.

Cotton producers wanted Vilsack to make cottonseed eligible for farm bill’s Price Loss Coverage program, but he said he lacked the authority to do so. He instead used the CCC to make a round of direct payments. Congress subsequently added cotton to PLC.

Vilsack says USDA could use a similar program and approach to help the ethanol industry.

Environmental groups including the National Wildlife Federation and Defenders of Wildlife are challenging the newly published Navigable Waters Protection Rule, calling it “an unlawful interpretation that contradicts the very purpose of the Clean Water Act.”

The rule, hailed by a broad collection of industries including agriculture, does not include an analysis of its effects on water quality, the groups said. Nor, they said, did EPA and the Army Corps of Engineers give the public a meaningful opportunity to comment. The rule replaces the Obama-era “waters of the U.S.” rule, best known as WOTUS.

“The agencies provided just 60 days for public comments despite proposing a definition that reverses more than 40 years of protections for waters across the country, discards the agencies’ long-standing interpretations of Supreme Court case law, and introduces complex definitions that require technical expertise to analyze,” the lawsuit said.

The suit was filed in federal court in South Carolina.

The Treasury Department will allow seasonal employers such as farms to use a broader time frame to calculate the maximum loan amount they can get under the popular Paycheck Protection Program.

The size of the forgivable loans is tied to the employer’s average payroll. A new rule gives seasonal employers the option of calculating the average using any consecutive 12-week period between May 1, 2019 and Sept. 15, 2019.

The change means that “if your payroll costs are much higher in the summertime to harvest your crops, you will qualify for a larger PPP loan,” says Paul Neiffer, a CPA at CliftonLarsonAllen in Walla Walla, Wash.

“However, until we get final guidance on whether you need to spend at least 75% on labor costs to get any forgiveness, you may want to tailor your loan request to the amount that you feel comfortable spending during the 8-week forgiveness period,” he advises.

Take note: The Trump administration has given small banks a temporary leg up in filing PPP applications. From 4 p.m. EST until midnight Wednesday, SBA only accepted loans from lending institutions with asset sizes less than $1 billion.

He said it. "I just got off the phone with the biggest in the world, the biggest distributors there are, the big companies you’ve been reading about. They are so thrilled, they are so happy, they’re all gung-ho, and we solved their problems. We unblocked some of the bottlenecks.” - President Trump, talking to reporters after a phone call with farm and agribusiness leaders.