The Washington offices of the U.S. Trade Representative are buzzing as collaboration with China over the “phase one” deal continues and final preparations are made for the launch of the U.S.-Mexico-Canada Agreement, but Chief Agricultural Negotiator Gregg Doud said he expects both deals will lead to increased sales of U.S. farm products.

“We have been really busy,” Doud said in an exclusive Agri-Pulse interview. “Things in the last month have really been rocking and rolling around here.”

That’s because despite production and trade disruptions wreaked by the COVID-19 pandemic, the start of USMCA is just days away, U.S. ag exports to China are on an upward trajectory, and Doud is optimistic the trend will continue.

China agreed in the “phase one” deal with the U.S. to buy a lot more soybeans this year than it did in the banner year of 2017, and Doud tells Agri-Pulse he’s optimistic the country will meet that commitment despite complications from the COVID-19 pandemic and rising doubt on Capitol Hill that it will be possible.

Critics point to the physical shipments of U.S. soybeans in the first few months of 2020 and how far they lag behind 2017 — the baseline year set under “phase one.” From January through June 11, the U.S. has shipped about 3.6 million metric tons of soybeans to China, according to USDA data. That’s far below the roughly 9.5 million shipped during the same time frame three years ago.

But that’s the wrong way of looking at it, says Doud. China is making massive purchase commitments with new contracts that are substantially outpacing sales activity in 2017.

According to USDA sales reports, Chinese importers are significantly ramping up purchases, especially for the 2020-21 marketing year, which begins Sept. 1.

So far, in this calendar year, Chinese importers have contracted to buy 7,481,600 tons of soybeans, according to a compilation of USDA weekly trade data through June 11 — the latest available report. Of that total, 4,433,600 tons are old crop purchases and 3,048,000 tons are new crop purchases. 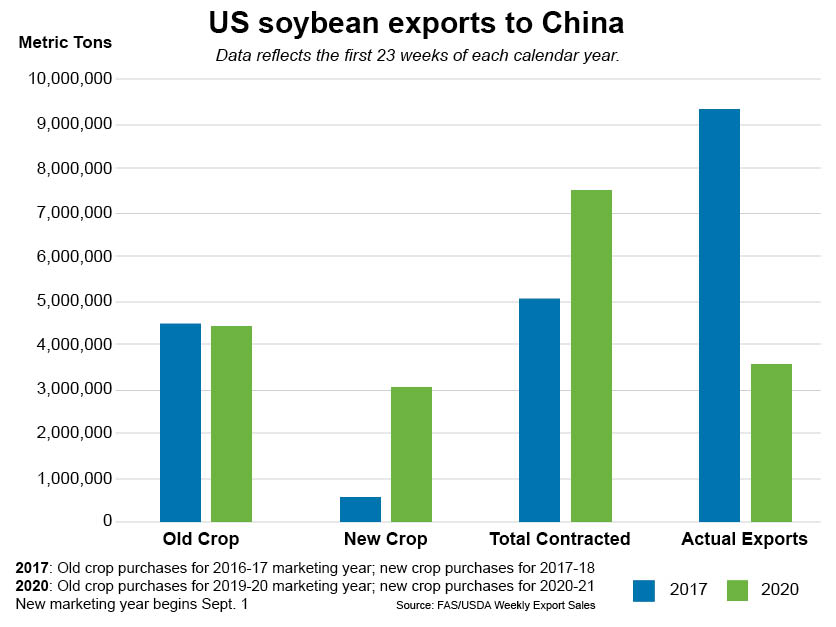 Nevertheless, it’s still going to take a lot to substantially increase sales to China, which purchased 32.8 million metric tons of soybeans in calendar year 2017, especially given the fact that the “phase one” deal did not go into effect until Feb. 14 and China did not start exempting U.S. soybeans from tariffs until early March.

Another complicating factor is the uncertainty of just how much more China will need to import this year after the country gorged on cheap Brazilian soybeans in the early months.

There’s no way to know for certain, but John Baize, an analyst for the U.S. Soybean Export Council, said he is optimistic sales to China will continue to rise as state-controlled companies like Sinograin plan to restock the country’s emergency reserves.

Sinograin, Baize said, has made it public that it wants to put at least 10 million tons of soybeans back into the reserves, and that could happen over the next few months.

The USDA reported Tuesday a daily export sales report showing China bought another 132,000 tons of soybeans for 2020-21, and that’s a small figure compared to what’s ahead in the coming weeks, said Baize.

Doud is optimistic, too, and capped off the Agri-Pulse interview with a sales pitch to China: “At these price levels for U.S. agricultural commodities, China will never have a better buying opportunity than they have right now.”

US ag exports to China rising fast, but still slow for ‘phase one’
China buys more corn and soy as USTR praises ‘phase one’ cooperation

The USMCA launch is still scheduled for July 1 and it’s expected to go smoothly. But behind the scenes, officials up to the highest levels in the USTR and USDA are scrambling to address last-minute issues and make sure Canada and Mexico appear ready to deliver all that they have agreed to in the replacement to the North American Free Trade Agreement.

A primary area of concern is that Canada lives up to its promises to import more U.S. dairy and stop flooding the international market with skim milk powder.

“This is clearly something that we’re following very, very closely,” Doud said. “We’re days away from entry into force. We are still working to resolve these issues with Canada, particularly on the (tariff-rate quota) side of the equation, but (USTR Robert Lighthizer) has been pretty clear that if U.S. farmers are not given the full benefits that were negotiated, we’re prepared to use the dispute settlement.”

Another area of concern that for Doud and his boss, USTR Lighthizer, is Mexico’s prolonged failure to approve any new biotech seed traits.

A key element of USMCA that’s widely viewed as a new standard for future trade agreements is the biotechnology chapter; Mexico has not approved a new ag trait since May 2018.

“Even though Mexico has regulatory systems in place to evaluate biotechnology products and is one of the countries with the most authorizations for food and feed use in the world, the regulatory agency responsible for authorizing food and feed events is seemingly no longer processing applications,” according to a recent report from USDA officials stationed in Mexico City.

There are 18 biotech traits in the queue for Mexican approval, many of which have been waiting for more than two years. Companies like Monsanto and Syngenta are still waiting for Mexico to approve seven corn traits, five cotton traits, two apple traits, two potato traits, one soybean trait and one canola trait. Mexico is statutorily required to take six months for an approval.

Industry officials tell Agri-Pulse Mexico’s halt in approvals was first simply viewed as a lull during the transition to a new administration under President Andres Manuel Lopez Obrador (AMLO), but that’s no longer the case. The dearth in approvals, combined with anti-biotech rhetoric coming from within the AMLO administration, has the U.S. ag sector worried.

Doud tells Agri-Pulse that Lighthizer and Ag Secretary Sonny Perdue are working to resolve this with their Mexican counterparts.

“We have been and continue to be engaged with Mexican officials at the highest levels. … This is something we are very closely coordinating with USDA,” Doud said. “There continue to be a lot of conversations between the U.S. and Mexico on this topic.”

That’s because what is at stake is the sanctity of USMCA and biotechnology agreements in this deal and deals to come.

“USMCA is really the gold standard for ag biotech in the context of free trade agreements, so given the commitments in there, it’s certainly concerning what we are seeing,” said Andrew Conner, senior manager for international affairs at the Biotechnology Innovation Organization. “But we’re optimistic the governments are going to work through it.”

Another fire that USTR is hoping to put out is Mexico’s increasingly hostile attitude towards pesticides. Mexico effectively banned the popular glyphosate herbicide last November, and the country’s regulatory review for registration and reregistration has effectively halted, according to industry sources.

Mexican Environment Secretary Victor Toledo recently wrote a column claiming the “immediate suppression of dozens of pesticides is urgent, starting with glyphosate, the most dangerous poison in the world” and that goes against the spirit of USMCA and threatens the future of registration and trade in hundreds of products, U.S. industry sources say.