The Department of Water Resources (DWR) presented to the California Water Commission last week on a pilot study looking at opportunities for flood-managed aquifer recharge in the Central Valley. Yet Justin Fredrickson, an environmental policy analyst at the California Farm Bureau, took issue with “two huge elephants in the room.”

In modeling the opportunities for groundwater recharge over the next century, DWR did not factor in the impacts of the Sustainable Groundwater Management Act (SGMA), he argued. The administration, he added, has also been making it difficult to negotiate voluntary agreements to head off the potentially deep impacts to the valley of the State Water Board’s plans for unimpaired flows in the Delta. Without policies improving surface water storage, conveyance and underground storage, the hopes for aquifer recharge become “illusory.”

“That choice is sending our agriculture elsewhere, he said. “That's troubling and it is something that the commission in the state of California needs to grapple with.” 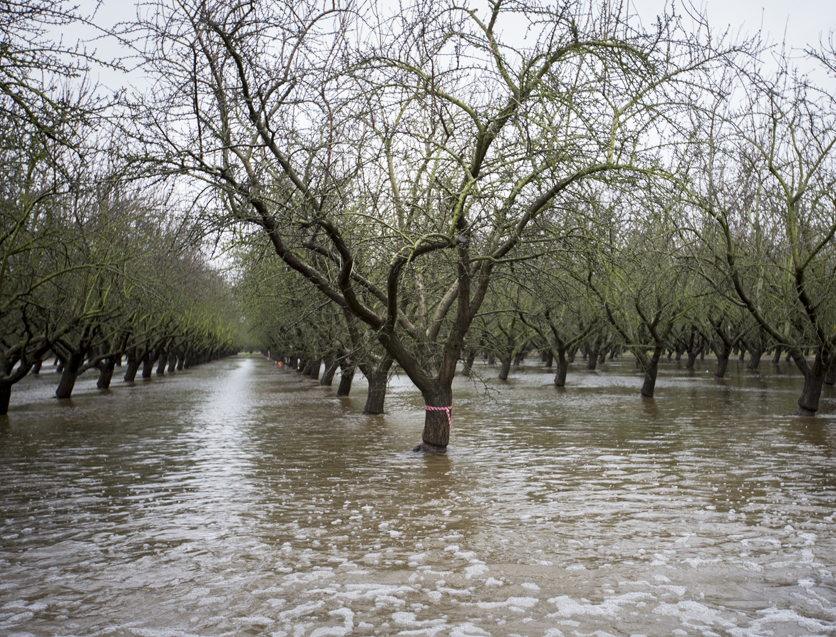 The state’s leading agricultural groups have strongly opposed the Proposition 15 ballot initiative on property taxes since early in the campaign. They fear the proposal would add an $11 billion tax on farms and other businesses by reassessing everything but the farmland at fair market value. Yet two progressive farm groups have come out in support of the measure.

The Community Alliance with Family Farmers (CAFF) argues Prop. 15 would actually benefit farmers. Prop. 15 “explicitly does not apply to real property used for commercial agricultural production,” the group claims. By reassessing commercial and industrial property valued at more than $3 million, the measure would exempt small businesses.

CAFF acknowledges that “in some situations, it’s possible that a few of these costs may be passed on to some of those farms,” such as large winery tasting rooms or a milk processing facility. The group argues, however, the need for funding schools with the new taxes outweighs those concerns.

Likewise, the California Climate and Agriculture Network (CalCAN) called it “extremely unlikely” that Prop. 15 would lead to higher taxes on fixtures and improvements to the land.

“Tax fairness will give local and state governments the resources needed to invest in our communities,” according to CalCAN.

Keep in mind: Both groups are often at odds with the rest of the industry on legislative measures as well.

It’s all but certain at this point that Congress won’t pass a big new stimulus bill before the election. But a deal in the lame duck session remains a possibility. House Speaker Nancy Pelosi on Sunday suggested she opposes waiting until next year when Democrats could have control of the White House and the Senate.

When she was asked on CNN’s State of the Union whether she would delay a stimulus deal if Democrats win the Senate, she said, "We want to do it as soon as possible. I thought the president did too and that was part of the leverage that each side had that we both wanted an agreement.”

Senate GOP Whip John Thune, R-S.D., told reporters on Friday that he’s optimistic about passing a bill in the lame duck. “Once the dust settles and the smoke clears from the election that we’ll be in a better posture for legislating. I’m hoping that everyone can get out of their corners and find a solution,” he said.

Take note: Democrats are heavily favored to retain control of the House, and Pelosi also told CNN that she plans to seek another two-year term as speaker.

The U.S. is providing farmers billions of dollars in subsidies, but so are countries around the world and the total is a whopping $708 billion annually in recent years, according to a new report released by the Organization for Economic Cooperation and Development.

The U.S. is much criticized internationally for its farm subsidies. The Trump administration paid out $28 billion over the past two years just to help farmers weather trade wars and as much as $30 billion for two rounds of the Coronavirus Food Assistance Program. But other countries, including South Korea, Japan and China, pay even more when measured as a percentage of overall farm revenues, according to the Washington International Trade Association.

Farmers are especially vulnerable to disastrous events beyond their control, says WITA, but poorer countries complain that global subsidies “disproportionately disadvantage their small producers, whose own governments cannot provide the same support, leaving them unable to compete with the heavily-subsidized farms of richer countries.”

Conservation rules likely not finalized until next year

USDA on Friday released a final rule for the Environmental Quality Incentives Program. But new rules for the Agriculture Conservation Easement Program and the Regional Conservation Partnership Program likely will not be finalized until early next year.

“We had hoped to have them by November and December. They are still in the clearance process and that does take a little while,” Natural Resources Conservation Acting Chief Kevin Norton tells Agri-Pulse.

He says COVID-19 response efforts took precedence over the rules because the agency can still implement the programs without them being finalized.

Read our report here on the EQIP rule.

Monsanto contends a scientific expert’s testimony in a Roundup cancer case should never have been considered by a federal court.

In arguments Friday before the 9th U.S. Circuit Court of Appeals, former Solicitor General Seth Waxman said pathologist Dennis Weisenburger’s testimony didn’t pass the Supreme Court’s test for admissibility of expert testimony, a point that resonated with at least one of the three judges on the panel.

Circuit Judge Ryan Nelson said he was concerned “about whether the 9th Circuit has departed from other circuits” on the issue “and whether that needs to be corrected.”

David Wool, the lawyer for Edwin Hardeman – whose initial $80 million verdict for exposure to Roundup has been reduced to about $25 million – said Weisenburger’s testimony would pass the test in any circuit court.

Two advocacy groups charge in a new lawsuit that EPA did not examine the impacts of a newly approved fungicide on endangered species.

The Center for Biological Diversity and Center for Food Safety say EPA failed to consult with federal wildlife agencies before approving inpyrfluxam for use on corn, soybeans, sugar beets and other crops despite EPA’s own finding that the chemical is “very highly toxic” to fish, including endangered salmon and steelhead. The case was filed in the 9th Circuit.

In proposing registration, EPA said inpyrfluxam “adds a new mode of action against key fungal pests that can cause high yield losses to soybean and sugarbeet crops. It is also likely to play a role in fungicide resistance management on those crops. On other crops (apple, corn, peanut and rice), inpyrfluxam appears to be comparable to currently available alternative fungicides.”

The USA Rice Federation is not waiting for the COVID-19 pandemic to go away before it strengthens ties with potential new customers around the world – especially in areas where the presence of U.S. rice is the scarcest.

That’s why it is holding a series of webinars aimed at foreign buyers in China, the U.K, the European Union and Latin America on local time to better market the U.S. grain that depends heavily on exports.

Technically, Britain is still part of the EU, but that won’t be the case for much longer and the U.K. continues to negotiate a trade pact with the U.S.

Ted McKinney, USDA’s undersecretary for trade and foreign agricultural affairs, will be speaking on the Oct. 27 webinar for China.

“We're not Neanderthals anymore. We're in a valley with millions of people, and we don't need fire to keep warm.” — Tom Frantz, an almond farmer and environmental justice advocate, arguing the Air Resources Board should ban residential (as well as agricultural) wood burning in the San Joaquin Valley.