President-elect Joe Biden’s commitment to addressing climate change and the food and ag industry’s progress in coalescing on ag carbon proposals are increasing the chances that farmers could see new income streams developing through private markets and USDA programs.

The Biden administration could take steps administratively, but ag groups also are gearing up for a climate debate in Congress even if Republicans narrowly retain control of the Senate after a pair of runoff elections in Georgia Jan. 5.

Among the ideas getting the most attention as Biden sets up his administration is a USDA carbon bank to buy ag carbon credits from farmers and sell them to energy companies and other corporations that need to offset their emissions.

The carbon bank, the brainchild of a key Biden transition adviser, is a central recommendation in a set of more than 40 proposals released Tuesday by the new Food and Agriculture Climate Alliance, a coalition of leading ag, food, forestry and environmental groups.

The recommendations are meant to draw support from a range of groups and include many proposals similar to provisions of the Agriculture Resilience Act, a bill introduced by Rep. Chellie Pingree, D-Maine, and backed by some environmental organizations and sustainable farming advocates that are opposed to carbon markets.

The carbon bank also is featured in a set of climate action recommendations released last week by a group of Obama administration veterans, including Robert Bonnie, who heads the USDA transition team.

Other recommendations in that group’s report, called “Climate21,” include creating new financial incentives in the crop insurance program for carbon-saving practices; targeting Rural Development spending more toward green energy; and reconsidering the relocation to Kansas City of the Economic Research Service and National Institute of Food and Agriculture. Bonnie's co-authors on the USDA recommendations included Leslie Jones, a former USDA official now with American Forests, a conservation group.

It’s not clear yet whether the Biden administration would seek to set up a carbon bank on its own, using the Commodity Credit Corp., or seek new legislative authority from Congress. But there are a number of other legislative proposals that would likely have to be included in a climate bill, including the Growing Climate Solutions Act, a bipartisan bill introduced this year to authorize USDA to certify verifiers of carbon credits.

A climate bill won’t be easy to pass in a closely divided Congress next year, but Randy Russell, a top agribusiness lobbyist who is working with the alliance, said there is a good chance that such a measure could pass.

“We’re looking at the possibility and I think the likelihood of climate legislation,” said Russell.

Organizers of the alliance began their work a year ago, long before it was apparent that President Donald Trump might lose, knowing that agriculture was under increased pressure from corporations and consumers to reduce greenhouse gas emissions.

Russell said he hopes that key Senate Republicans, including Majority Leader Mitch McConnell, GOP Whip John Thune and Sen. John Boozman, the next chairman or ranking member of the Agriculture Committee, consider the alliance’s recommendations as “consistent with their philosophy.”

Republicans need to win at least one of the two Georgia runoffs to be assured control of the Senate next year. They have currently won 50 seats. Democrats would control a 50-50 Senate since Vice President-elect Kamala Harris would be the tie-breaking vote

An environmentalist who opposes carbon offset markets, Jason Davidson, food and agriculture campaigner for Friends of the Earth, believes industry-based climate proposals stand a good chance of passing Congress. He adds there also may not be sufficient Democratic opposition in Congress to USDA's acting on its own to facilitate an ag carbon market.

“I can say with confidence that I think the ag section of a potential House climate bill will have broad support, including potentially bipartisan support,” Davidson said. House Democratic leaders have generally been supportive of proposals from the House Agriculture Committee, he said.

He noted that the Growing Climate Solutions Act’s lead sponsors include Debbie Stabenow, the ranking Democrat on the Senate Agriculture Committee, and Rep. Abigail Spanberger, a Virginia Democrat who chairs the House Ag Subcommittee on Conservation.

Advocates of the markets say they will allow farmers to earn money from practices, such as cover crops, that store carbon in the soil and also help protect water quality and limit water usage. 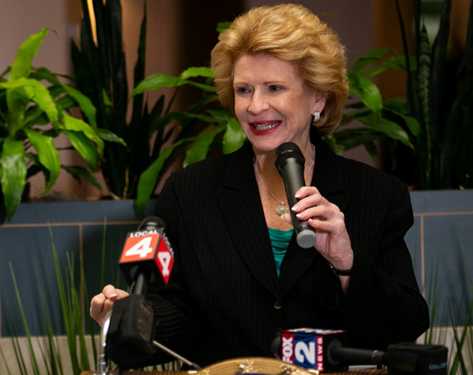 Stabenow welcomed the formation of the Food and Agriculture Climate Alliance without immediately endorsing the recommendations.

“While agriculture and forestry are uniquely affected by the climate crisis, they are also a key part of the solution,” Stabenow said. “We need to significantly scale up sustainable practices on farms and in forests that benefit producers and address the climate crisis. It’s great to see agriculture, forestry, and environmental leaders teaming up to advance commonsense climate solutions.”

Boozman welcomed the formation of the alliance but notably has yet to take a position on the Growing Climate Solutions Act, which is designed to accelerate the development of ag carbon markets by assuring the validity of credits.

Boozman told Agri-Pulse on Tuesday that he wants to see a cost estimate for the bill and get assurance that it will properly benefit farmers and not just companies that trade the credits. "I want to make sure that the financial benefit goes to the farm community as opposed to some middleman or middlemen for something else," he said.