President-elect Joe Biden says he’ll announce a White House climate policy coordinator and a “policy-making structure” to go with the new office. The climate czar “will lead efforts here in the U.S. to combat the climate crisis and mobilize action to meet this existential threat,” Biden said.

He went on to empathize how serious a priority the issue for him.

“At the global meeting at Glasgow one year from now all nations must raise ambition together or we will all fail together,” the former secretary of state said at a news conference Tuesday. The Paris agreement set a goal of keeping global warming under 2 degrees Celsius, and that’s the target that has generally guided major corporations in setting their climate commitments.

By the way: During an interview with NBC News, Biden reiterated his pledge to send a bill to Congress to legalize the 11 million undocumented immigrants. But with Congress closely divided, it will likely be as difficult as ever to get such a measure through Congress, even if the bill addresses other immigration issues, including reforms of the H-2A program for foreign farmworkers. 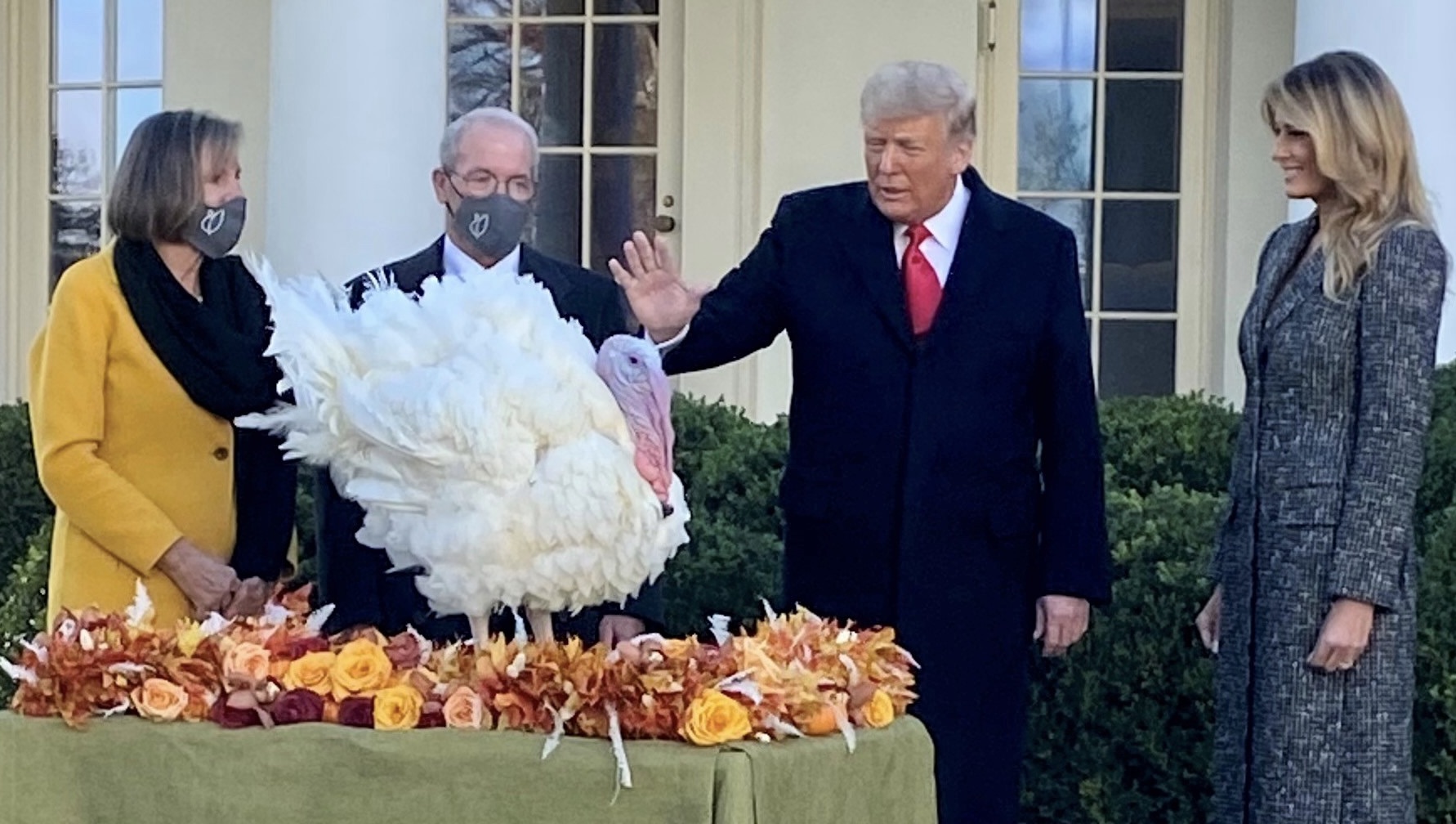 President Donald Trump pardons Corn as National Turkey Federation Chairman Ron Kardel and his wife, Susie, look on. The Kardels raised Corn and Cob at their farm in Iowa.

This year’s presidential turkeys, Corn and Cob, are retiring to their home state of Iowa

After the annual presidential pardoning ceremony at the White House Tuesday. Technically, only Corn got pardoned, but President Donald Trump says the birds “will retire under the care of skilled veterinarians at Iowa State University, a tremendous university in Ames.

“Once there, people of all ages will be able to visit them and learn about poultry science, veterinary medicine, and the noble American tradition of farming,” the president went on.

Biomass-based diesel has become a poster child for California’s low carbon fuel standard, but it would be tough to get Congress to implement a similar program nationwide. Fuels such as biodiesel that are low in carbon intensity can qualify for credits under the California system.

“With a closely divided Congress, I’m not sure a national LCFS would gather the bipartisan support to be enacted,” National Biodiesel Board’s Kurt Kovarik tells Agri-Pulse. Kovarik says NBB’s lawyers don’t think EPA has the statutory authority to convert the Renewable Fuel Standard into a national LCFS.

Kovarik says if the Biden administration is serious about reducing greenhouse gas emissions, it should use the RFS to displace more petroleum diesel.

By the way: Biomass-based diesel, which includes soy-based biodiesel, has been the largest generator of low carbon fuel credits under California’s LCFS. In 2019, biomass-based diesel generated 45% of all compliance credits, Kovarik says.

This week’s Agri-Pulse newsletter reports on fears that annual biofuel usage targets will be delayed into next year. We also report on the prospects for vaccinating food and ag workers against COVID-19 and look at how Biden may handle trade policy with Cuba.

US to hit phosphate fertilizer imports with tariffs

The U.S. will begin imposing countervailing duties on phosphate fertilizer from Morocco and Russia after an investigation showed the countries were subsidizing exports, according to the Commerce Department.

The decision comes despite pressure from eight GOP farm state senators, who pleaded with Commerce not to impose the tariffs out of concern they will increase input costs for American farmers.

“U.S. farmers depend on affordable phosphate fertilizers to produce a variety of crops, including corn, soybeans, cotton, wheat, sorghum, sugar beets, and fruits and vegetables,” Kansas Sen. Jerry Moran and other Republicans told the Commerce Department and U.S. International Trade Commission in an Aug. 3 letter.

The U.S. imported about $730 million worth of phosphate fertilizer from Morocco and $300 million from Russia in 2019, according to Commerce.

Brazil has lifted its prohibition on domestic biodiesel producers using imported soybeans and soy oil to make the fuel, according to a report from the Foreign Agricultural Service’s bureau in Brasilia. It’s yet another sign that Brazil – the world’s largest soybean producer and exporter – will need to import the oilseeds after exporting more than normal this year.

“Soybean oil prices have been spiraling, in correlation with fast dissipating product stocks,” the FAS analysts said in the report. “This policy move highlights the government’s rising concern about spiking consumer inflation.”

It was just last month that Brazil dropped its import tariffs on soybeans from the U.S. and elsewhere outside the Mercosur trade bloc in South America.

Global sugar production for the 2020-21 marketing year is going to reach 182 million tons – a roughly 9% increase from 2019-20 – with Brazil accounting for most of the increase, according to a new FAS analysis.

Thanks to good growing weather, Brazilian farmers are forecast to increase production by nearly 30% this marketing year, but less of it will be going to ethanol and more will be going into stocks as Brazilians consume less fuel during the COVID-19 pandemic.

Mexico is expected to produce 6.3 million tons, a 13% increase, giving the country more to export.

A group that represents wool, leather and fur producers is blasting the parent company of Ann Taylor stores for deciding to end its sale of alpaca wool products. The announcement followed pressure from People for the Ethical Treatment of Animals.

The Natural Fibers Alliance said the decision by Ascena Retail Group “is particularly bizarre because Ann Taylor will apparently continue to sell cashmere wool, which is harvested in a similar fashion to angora wool, through shearing. Moreover, failing to trim wool from alpacas can lead to heat stress in the animals.”

Ascena, which also operates chains such as Lane Bryant, didn’t immediately respond to a question about its decision.

He said it. “Like so many presidential flocks, this one started in the great state of Iowa in what can only be described as an act of blatant pandering. And, by the way, I love the state of Iowa.” - President Trump, talking about Corn and Cob.