Home » Daybreak: Pace of change in CA water is 'not up to the challenge'
WEST

Daybreak: Pace of change in CA water is 'not up to the challenge'

Gov. Gavin Newsom has appointed Liane Randolph to chair the Air Resources Board. Since 2015 Randoph has served on the Public Utilities Commission and before that held several positions across administrations, including deputy secretary for the Natural Resources Agency.

Randolph arrives at a key moment for CARB. The Biden administration is expected to approve waivers for the agency’s Advanced Clean Trucks rule and Newsom’s ban on combustion engines. CARB will also decide on more restrictions to ag burning in the San Joaquin Valley in February. The agency could spearhead a potential update to the cap-and-trade program over the coming months as well.

Outgoing Chair Mary Nichols, who began her career as an attorney for the Natural Resources Defense Council, led the board for 13 years before terming out this month. She has been at the top of Biden’s list to head U.S. EPA.

On that note: Newsom’s chief of staff, Ann O’Leary, is reported to be leaving the cabinet to also pursue a position in the Biden administration.

The board for the Metropolitan Water District of Southern California, which handles water imports to the Los Angeles region, voted this week to reduce its cost share for the Delta tunnel project.

Metropolitan accounts for the bulk of the spending on the controversial conveyance project. Its share of the cost will drop from 60% to 47%, adding up to a reduction of about $50 million. The total planning costs are estimated to be more than $340 million. Water contractors buying into the project, such as Central Valley irrigation districts, will have to absorb the extra costs.

Keep in mind: Metropolitan has been adopting a more diversified water portfolio in recent years and has implemented more efficient practices that have drastically cut back on their demand for imported water from the North. 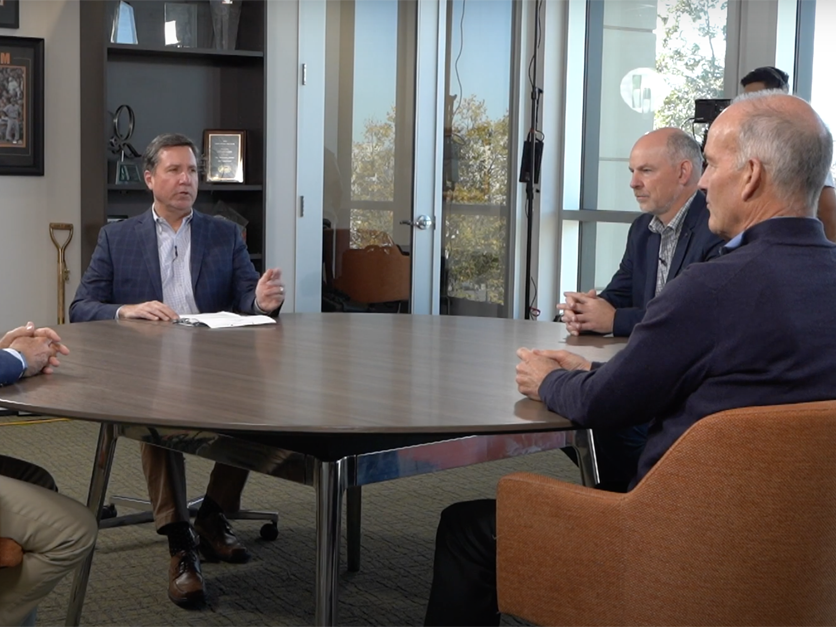 Soren Bjorn, president of Driscoll’s of the Americas, said a new nitrate regulation in the Salinas Valley will be harder for organic producers to meet than for conventional farmers.

“That is an element of sustainability that we definitely have to look at it,” he said. “In our case, technology becomes critical to that.”

He added that capturing and cleaning up water will be easier, however, for berry production than for vegetable crops.

Bjorn was taking part in a roundtable discussion with the heads of Western Growers, Taylor Farms and JV Smith Companies. The conversation ranged from single-use plastics to GMOs and the market potential for indoor farming.

Meanwhile: At the same time, the Central Coast Water Board hosted the first of three full days of workshops to further debate the many technical provisions being proposed in Ag Order 4.0.

Board members continue to wring their hands over how far they can push growers to change well-established practices to further reduce nitrate contamination in groundwater.

Horticulture sales down 9% as industry consolidates

The USDA National Agricultural Statistics Service has released a report on the 2019 horticulture census, which covers floriculture, nursery and specialty crops.

At $2.6 billion, California sales for the industry were down 9% from 2014 and the number of operations dropped by 22%. Cut flower sales decreased by 26% while nurseries were down 13%. Corporate operations accounted for 80% of sales, although nearly half of all operations were family or individually owned.

California generated nearly 20% of U.S. sales in 2019, followed closely by Florida and then Oregon.

The House has passed a new stopgap spending bill to keep the government funded through next week - and buy more time for negotiators to reach a deal on a new coronavirus relief package.

Meanwhile, we have a better idea of what could be in the package for agriculture and nutrition assistance. According to a summary obtained by Agri-Pulse, a bipartisan proposal that negotiators are working on would allocate $13 billion for agriculture. The summary doesn’t specify how the money would have to be spent except for $600 million earmarked for fishery disaster relief.

In a potential win for Democrats, the bill would authorize a 15% increase in SNAP benefits.

State of play: House Speaker Nancy Pelosi indicated Wednesday afternoon the talks were still making progress. “I think that we’re close, that’s what they tell me, those who are negotiating,” she told reporters. Two of the key issues continued to be business liability protections and aid for state and local governments.

Here’s a sample of the praise Vilsack is getting:

Zippy Duvall, president of the American Farm Bureau Federation, said Vilsack “earned a reputation for rising above partisanship to serve farmers and ranchers.”

Colin Woodall, CEO of the National Cattlemen’s Beef Association, says "Vilsack is adding another chapter to an already storied career in agriculture. He has the unique skill set to be able to hit the ground running on day one.”

Todd Van Hoose, president and CEO of the Farm Credit Council, said Vilsack would be a “strong advocate” for farmers and rural America. Vilsack’s “comprehensive knowledge of agriculture and passion for rural America” was evident during his eight years under Obama, Van Hoose said.

Read our report here on what a Vilsack nomination would mean.

A new bipartisan Senate bill is intended to promote carbon sequestration and help meet a goal of planting 1 trillion trees worldwide by 2030.

Introduced by Delaware Democrat Chris Coons and Indiana Republican Mike Braun, the bill would authorize $150 million in loan guarantees so rural landowners using sustainable forestry practices could participate in forest carbon markets. It also would authorize $10 million annually for USDA to ensure an adequate supply of seeds and saplings.

The bill also would require USDA and the Interior Department to monitor the net stock of carbon in grassland and require USDA to set goals to increase the net carbon stock in American forests, grasslands, wetlands, and coastal blue carbon habitats.

Why it matters: A study in Science last year inspired the legislation. It found that 205 gigatons of carbon — about two-thirds of what has been produced by humans so far — could be sequestered by restoring 900 million hectares of forest and woodland canopy cover.

“The pace of change and creativity in California water law is not up to the challenges and problems we face in water supply and reliability and sharing.” — David Osias, a prominent water attorney at Allen Matkins, on what keeps him up at night, during a UCLA conference on the state’s economic outlook.

Osias added: “I worry that rather than being the grease of commerce, which is what lawyers and laws are typically in commercial transactions, we're the sand in the gears when it comes to water.”