With two dry years in California and another likely to come, urban and agricultural water districts are taking a close look at the practices and infrastructure investments that have paid off so far and what still needs more investment.

Decades of planning have delivered successes this year for the Metropolitan Water District of Southern California, the largest water supplier in the nation—and agricultural districts have taken notice. The water managers have relied on both the Colorado River and State Water Project deliveries to supply drinking water to nearly 20 million residents in Los Angeles and neighboring counties. As both sources have grown less reliable due to droughts and endangered species protections, Metropolitan has invested in water storage, recycling and trading agreements with farmers in the Imperial Valley who hold senior rights to Colorado River water.

One of those investments was Diamond Valley Lake, an off-stream reservoir that began operation in 2000 and has more storage capacity than Lake Havasu in Arizona.

“People looked at it and said, ‘Oh, a $2 billion investment. That's crazy,’” said Adel Hagekhalil, the new general manager for Metropolitan, during a recent event for the Sacramento Press Club. “Now it's saving us.”

With half of the water in Southern California coming from local sources, Metropolitan has also set a goal to go further by cutting imports in half. Hagekhalil is hoping to build “the fourth aqueduct in Southern California”—an umbrella strategy for diversifying the water portfolio by developing more local water supply, conservation and storage flexibility.

Westlands Water District General Manager Tom Birmingham noticed how such investments have led to more resilience to the drought this year.

He praised the district for improving conveyance on the California Aqueduct as well and said the commitments like this raise fundamental questions over whether the state and nation should make comparable investments in water supply infrastructure for California.

“Chief among those is: Do we want to preserve the viability of agriculture in California?” said Birmingham. “The food is going to come from somewhere.” 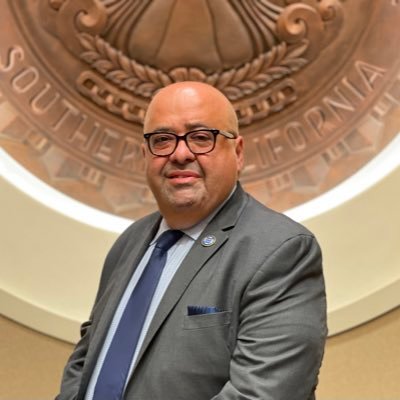 Adel Hagekhalil, general manager of the Metropolitan Water District of Southern CaliforniaWhile Westlands, the largest agricultural water district in the nation, has made strides in water conservation over the years, the drought is hitting its farmers hard. The district has taken about 100,000 acres of land out of production in recent years in response to contaminated aquifers and reduced supply, and growers are producing more yields with 25% less water than about 30 years ago. Yet the district projects as much as 300,000 of its 540,000 irrigated lands will go fallow this year due to the drought, and it anticipates spending more than $100 million on buying water on the transfer market.

“Even in this critically dry year, because of the cooperation and the efforts being made by water agencies around the state, there's water available for transfer,” said Birmingham, adding that this will also provide for cold water storage in Lake Shasta to benefit salmon.

On top of that, researchers estimate the broader San Joaquin Valley will see as much as 700,000 acres of land permanently fallowed over the next two decades as local agencies implement plans for the Sustainable Groundwater Management Act (SGMA). Birmingham, however, cautioned against seeing SGMA “as all doom and gloom” and said the district perceived it as an opportunity to codify the practices it was already doing to manage groundwater in the subbasin.

The silver lining with the drought, he explained, has been that it has made it “abundantly clear that we have to all work together to address these issues.” This has already been playing out in negotiations over voluntary agreements for exports out of the Sacramento–San Joaquin Delta, which have focused on a comprehensive watershed-wide approach to protecting endangered species.

“We need to take actions and test them to determine whether they're working,” he said. “If they're not, we need to think about what else should we be doing with the resources that we have.”

CDFA Secretary Karen Ross stressed the negotiations have been progressing, despite skepticism from environmental groups.

“If it were easy, it would have been done a decade ago,” said Ross. “It is very complex, and it really underscores how connected we all are.”

Jennifer Pierre, who is the general manager of the State Water Contractors and has been involved in the negotiations, said she hopes to get more conservation groups on board.

“One of the challenges in the Delta is that everybody has a different vision for how to achieve a shared vision of it,” said Pierre. “And we get stuck.”

Many of those problems boil down to a lack of trust, she explained, which must be overcome to take a risk on new approaches.

Hagekhalil agreed, adding that doing nothing is not an option. He pushed for more state and federal investment in infrastructure to support such goals.

With an $8 billion federal water infrastructure package in the works, Birmingham said a number of projects could benefit from investments. The expansion of San Luis Reservoir, for example, would add about 120,000 more acre-feet of storage. Also high on his list were raising the height of Shasta Dam and building Sites Reservoir, which could have stored millions of additional acre-feet during the 2017 wet year.

Pierre pointed out that several other projects could provide immediate relief for the current drought, such as turf reduction programs for residents, funding smart meters, lining canals and cleaning up contaminated groundwater basins. She also said the state could make investments in buying down water demand and purchasing water for environmental purposes. Mandating a 25% reduction in water use across the state, as former Gov. Jerry Brown did in the last drought, however, would only lead to a negative response, she cautioned.

Hagekhalil said such a mandate could actually hurt his district’s member agencies that depend on recycled water for their supply. He called for more action with infrastructure investment and argued this should be treated as a “Mulholland moment for our future in this state,” invoking the famed water mogul who brokered the first major water deals for Los Angeles.

“I'm just frustrated that we're not talking about big things that we can speak to. We need to stop trying to find excuses not to do it,” said Hagekhalil. “The drought is a wakeup call. And if we don't take advantage of it right now, we have failed.”