“While I certainly have some hurdles ahead. I also know that I join millions of Americans who face significant health challenges of their own,” Dole said in a statement he posted Thursday.

USDA’s top climate policy adviser, Robert Bonnie, says the department has a little over 30 days to carry out its outreach to farmers, ranchers and forest managers on climate policy.

An executive order signed by President Joe Biden required USDA to get input from the sector on how agriculture should be involved in addressing climate change, a top priority for the administration. Speaking at USDA’s annual Ag Outlook Forum, Bonne also said the department has about 75 days to complete a report on climate-smart agriculture.

USDA also has a role to play in meeting Biden’s goal of conserving 30% of U.S. land by 2030. Bonnie says USDA will rely on partnerships and incentives to do that.

By the way: A new study by USDA’s Economic Research Service uses survey data to track trends in cover crop adoption. Among the findings: 15.4 million acres of cover crops were planted in 2017, up 50% from 2012. Fields in cotton and corn silage were significantly more likely to have cover crops than fields used for soybeans or corn-for-grain. One-third of the cover crops planted in 2018 received financial incentives from federal, state or other sources.

Biden’s immigration bill has finally been introduced in Congress, and it’s well short of what will be needed to get support from farm groups. The bill offers an expedited path to citizenship for farmworkers but there’s no expansion in the H-2A program, and the legislation would require farms to start paying overtime.

Keep in mind: The bill’s sponsors acknowledged it will be tough to pass a broad immigration bill and wouldn’t rule out trying to attach pieces of Biden’s proposal to a budget reconciliation bill that wouldn’t need GOP votes.

Biden said the bill “will bring about much needed change to an immigration system where reform is long overdue.”

Read our report on the bill here. 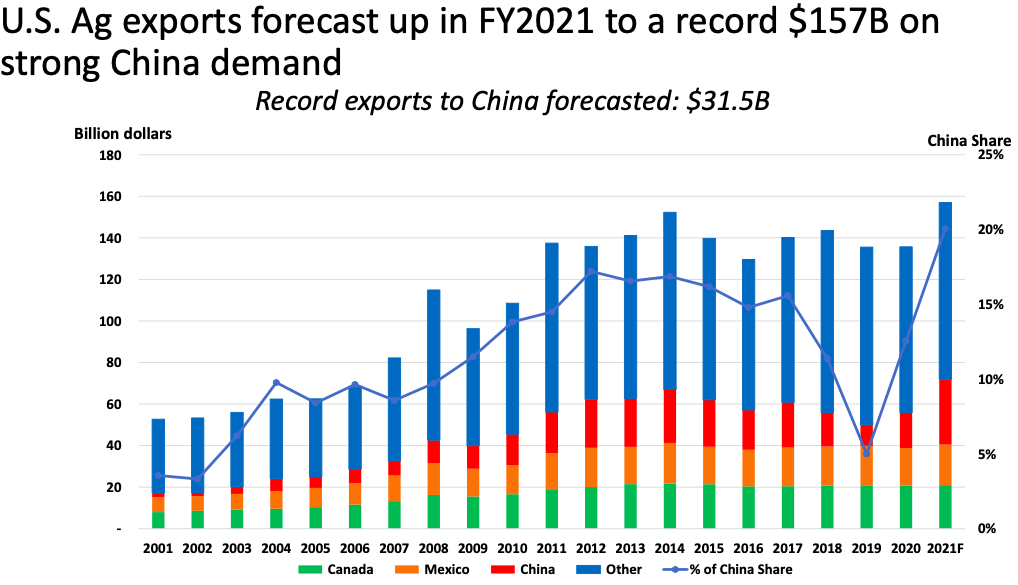 China’s voracious appetite for corn imports is the driving factor behind rising prices, and the country will continue its purchasing spree despite how expensive the grain is becoming, says USDA Chief Economist Seth Meyer.

“The Chinese continue to buy,” Meyer said during the Ag Outlook Forum. “Certainly, Chinese demand isn’t being rationed by those higher prices because they are still lower than prices internal to China.”

Chinese demand will help push U.S. corn exports in fiscal year 2021 up to a new record of $14 billion, according to a new USDA forecast. That would be up from just $8.2 billion in FY 2020.

The U.S. livestock industry is feeling “the pinch” of higher grain prices, Meyer said. But he stressed that “so far demand has been pretty robust as well for those meat products.”

Read our report on his commodity forecast here. 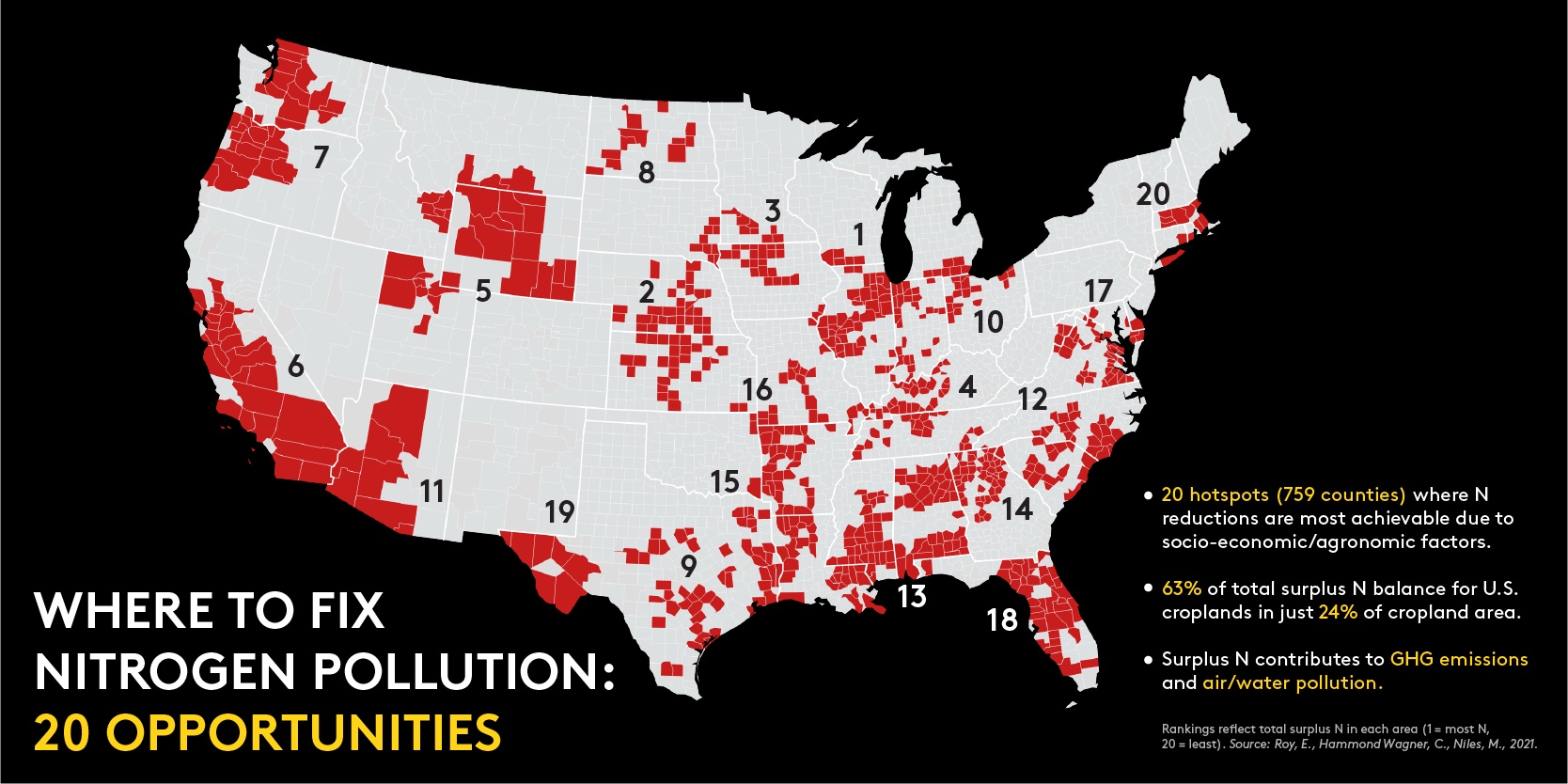 A new study has identified 20 “hotspots of opportunity” (shown above) where farmers and government agencies should focus their nitrogen reduction efforts. According to the study, farmers in those areas could cut nitrogen usage without hurting crop yields.

The nitrogen surplus areas “represent a whopping 63% of the total surplus nitrogen balance in U.S. croplands, but only 24% of U.S. cropland area,” says a news release from the University of Vermont. “In total, they comprise 759 counties across more than 30 states,” according to the study published in Environmental Research Letters.

Based on total excess nitrogen, the top-ranked hotspot is a 61-county area across Illinois, Indiana, Missouri and Wisconsin. Next is a 55-county region in Kansas and Nebraska, followed by 38 counties in Iowa, Minnesota and South Dakota.

The Biden administration is rescinding draft guidance issued by the Trump administration to implement the National Environmental Policy Act, saying the previous guidance did not give agencies clear direction on how to assess the impact of greenhouse gases on their activities.

The Council on Environmental Quality will take another look at Obama-era guidance issued in 2016 and “is encouraging federal agencies to consider all available tools and resources in assessing greenhouse gas emissions and climate change effects of their proposed actions,” including that 2016 guidance.

A large and varied collection of conservation groups has endorsed New Mexico Rep. Deb Haaland for Interior secretary, calling her “a proven leader and the right person to lead the charge against the existential threats of our time — tackling the climate, biodiversity, extinction and COVID-19 crises, and racial justice inequities on our federal public lands and waters.”

The groups, ranging from the Natural Resources Defense Council to the Rocky Mountain Farmers Union, made their view known in a letter to Senate leaders, including Senate Energy and Natural Resources Chairman Joe Manchin of West Virginia, who will preside over Haaland’s confirmation hearing Tuesday.

Prices for renewable identification numbers, compliance credits for the Renewable Fuel Standard, are steadily rising and approaching their highest levels in history, according to a report from the Energy Information Administration.

The corn ethanol (D6) RIN price surpassed $1 per gallon in late January and early February 2021. This is the highest price since 2013, according to EIA.

D4 RINs for biodiesel approached $1.20 a gallon during the same timeframe. EIA says the price increases are due in part to a reduction in small refinery exemptions and uncertainty around future usage mandates.

He said it. “We’ve got to end these wars. If we can end the wars, honestly, we can end world hunger.” – World Food Programme Executive Director David Beasley, a former South Carolina governor.