Coronavirus Food Assistance Program: Where did the money go?

When the Trump administration crafted its coronavirus relief payments to farmers, it made sure to get checks to everyone who produced any kind of food or fiber product during the year, from mint, mohair and tobacco to corn and cattle. The pandemic had severely disrupted the farm to fork supply chain — forcing many producers to dump milk, euthanize livestock and poultry and try to find new ways to redirect sales away from restaurants, cafeterias and hotels.

As a result, as many as 900,000 or more individuals or entities in every corner of the country, including Puerto Rico, qualified for payments that range from as little as a few dollars to $1 million or more, according to an analysis by Agri-Pulse.

However, because the payments closely track the value of U.S. agriculture production, the $23.6 billion in Coronavirus Food Assistance Program payments made during 2020 are heavily concentrated among larger farms and in regions of the country with the heaviest ag production.

About 45,000 individuals and entities, or 5% of the total recipients, accounted for more than half the payments, just under $12 billion, according to data provided to Agri-Pulse under the Freedom of Information Act. The top 10% of recipients claimed more than 65% of the payments; the bottom 10% shared about $24 million.

Agriculture Secretary Tom Vilsack, who took office last week, is already raising concerns about the fairness of the payment distribution, which is under review by the department.

Nationally, a few farms were ineligible in 2020 despite appeals to the Trump administration. Those producers included contract growers who don’t own their livestock or poultry and dairy producers who wanted payments for cows that were culled and sold for beef.

Legislation passed in December made contract growers eligible, and the outgoing Trump administration announced Jan. 15 that they could start applying for payments. Turf grass and pullets also were added to the program, and top-up payments were made available to pork producers. All of those actions are now on hold while the new administration's review is under way.

John Newton, chief economist of the American Farm Bureau Federation, said CFAP payments were designed to address farms of all sizes and types and inevitably concentrated where production is highest.

The payments are based on the value of production, “so there has been a flow toward where production is most concentrated, and I think that's what we see,” Newton said.

There was an especially heavy concentration of payments in California’s Central and Imperial valleys, regions with prodigious amounts of dairy, fruit, vegetable and nut production that have traditionally received relatively little in the way of direct USDA assistance. The largest farm bill commodity program, Price Loss Coverage, is limited to producers of grain, oilseeds, cotton, peanuts and pulse crops.

Eight of the top 10 counties for CFAP payments are in California, led by Tulare and Fresno counties with $242 million and $234 million respectively. All together, California farms collected nearly $1.8 billion in CFAP, second only to Iowa's $2.1 billion. By comparison, USDA made $1.9 billion in PLC payments in 2019, only $20.5 million of which went to California.

Other top counties for CFAP include Sioux County, Iowa, which has a heavy concentration of hog, chicken, dairy and cattle production and ranks fifth with $129 million in payments. Grant County, Wash., which produces cattle, vegetables, apples and wheat among other commodities, ranks No. 10 with $74 million in payments.

By comparison, payments through the Trump administration’s Market Facilitation Program, which was designed to compensate growers for the impact of retaliatory tariffs, were more concentrated in the South and Midwest. Six of the 10 counties that received the largest payments during the 2019 round of MFP were in Texas or Illinois.

CFAP was delivered in two rounds, starting in June, under eligibility requirements that were expanded to additional commodities as USDA fielded complaints from producers that were initially omitted. Some commodities, including hemp, tobacco and several classes of wheat, were added for the second round of payments that started in September.

Payments were capped at $250,000 per person for both of the two rounds, and there are special rules allowing for larger payments to corporations, limited liability companies, limited partnerships, trusts and estates.

Fresno County dairy producer Steve Maddox, who milks over 3,000 head of cows, said CFAP payments helped compensate producers for the disruptions caused when restaurants, schools and other sites shut down because of government-ordered COVID-19 lockdowns.

Then-Agriculture Secretary Sonny Perdue announced plans for the program in April 2020, tapping funds in a newly passed, massive COVID aid package, as the industry was reeling from the impact of the supply chain disruptions on commodity markets. Detailed rules for the first round were announced a month later.

Maddox pushed back against critics who say large-scale producers like him shouldn’t have gotten any money, saying the payment caps worked to limit the amount of money big farms could receive.

“I didn’t get my full amount per cow or per hundred pounds of milk ... but rightfully so," he said.

Kevin Roozing, a banker and farmer in Sioux Center, Iowa, said he firmly believes some farmers would have gone bankrupt without financial relief from USDA.

“When we started doing financial statements this fall, I was expecting some problems and most of the guys held it together and did OK. If you started asking them and doing math, it was the CFAP payments that kept a lot of these guys afloat,” he noted.

The surge in prices for corn, soybeans and other commodities that started in the last half of 2020 has helped producers, but farmers in his area also are concerned about the upcoming growing season as conditions in the area are very dry, he said.

In Grant County, Wash., cattle and grain producer Ryan Poe said he probably would have lost money in 2020 without CFAP, even though his winter wheat crop wasn’t eligible for payments during the program’s first round. Poe, who also produces canola, said the CFAP payment helped pay for the crop inputs for this year’s crops.

“Coming out of the harvest, our farm wasn’t all that impressive of a harvest, and just struggling with everything up to that point, it definitely was a big relief for us for that payment to come through,” said Poe. 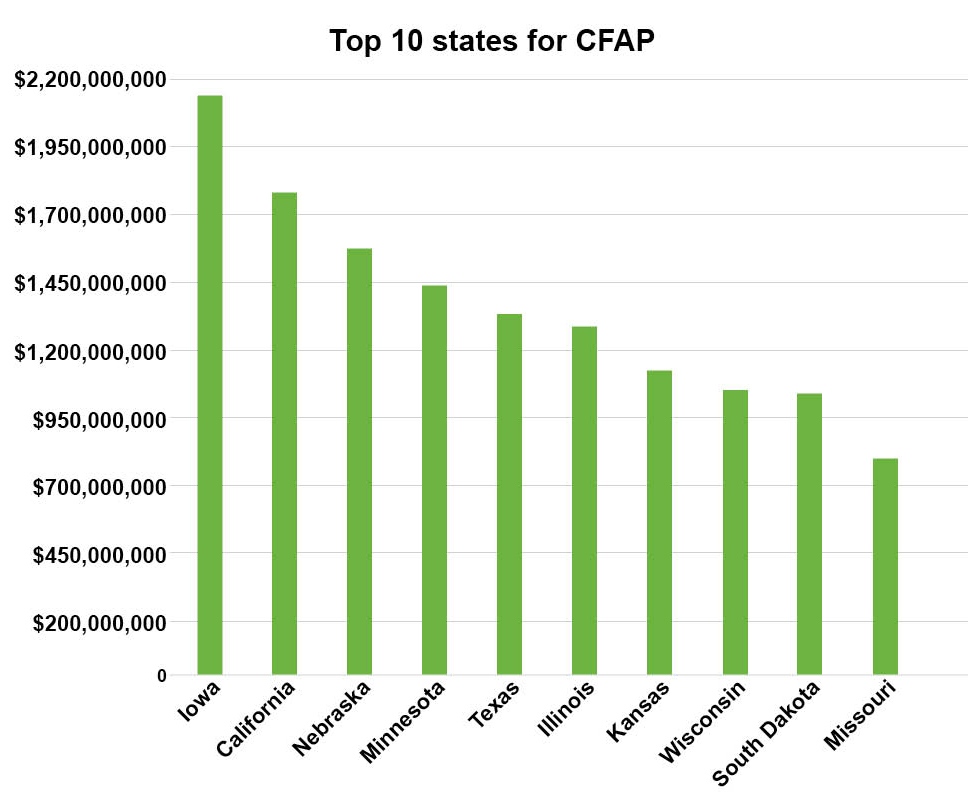 Other areas that benefited heavily from CFAP included Weld County, Colo., ($59.2 million) home to giant JBS beef packing plant in Greeley and one of the largest concentrations of cattle feeding in the world; and such dairy-heavy counties as Stearns, Minn. ($65.2 million), Dane, Wisconsin ($53 million) and Lancaster, Pa. ($52 million).

Also illustrative of how widely money was distributed under CFAP is Santa Barbara County, Calif., best known for its spectacular coastline but also a major producer of vegetables, leafy greens and grapes. The county’s farms received $48.2 million in CFAP payments. By comparison, the county received just $854,000 in government farm payments while producing $1.5 billion worth of crops in 2017, according to the USDA ag census.

Up the coast, Monterey County ($4.2 billion in ag production and $1.3 million in government payments in 2017) received $46.6 million in CFAP payments.

It is difficult to tell from USDA the exact number of people who received payments or the commodities on which they received payments. Individual producers can receive payments under their own names or through entities such as companies or partnerships.

As with conventional commodity programs and crop insurance, farmers had to be in compliance with conservation requirements for highly erodible land and wetlands to be eligible for CFAP. Recipients couldn't have adjusted gross incomes exceeding an average of $900,000 unless 75% of their adjusted gross income came from farming, ranching or forestry.

USDA’s Farm Service Agency declined to release the type of commodity on which producers qualified for payments, saying that could disclose confidential business information. FSA said making public the type of commodity along with payment details “would give insight into the type and scope of farming operations.”

The agency said the data was current as of Jan. 8. The Agri-Pulse map did not include Alaska, Hawaii and Puerto Rico. A few payments continue to be made under the second round of the program.