Federal agencies are cutting travel and preparing to operate with staff disruptions because of the coronavirus outbreak, and Agriculture Secretary Sonny Perdue signaled that he’s open to expanding feeding programs if Congress gives him the legal authority.

The Food and Drug Administration informed employees that it is canceling official agency travel through April “except mission-critical and COVID-19 response-related travel, and will reassess on an on-going basis for future months,” according to a memo obtained by Agri-Pulse. FDA also is postponing all foreign inspections until April.

In an Agriculture Department memo authored by Deputy Secretary Steve Censky and obtained by Agri-Pulse, agencies were told to rethink all nonessential travel and to consider teleconferencing for meetings.

“Agencies should review their Continuity of Operations Plans (COOP) to ensure that telework is fully incorporated and that employees are telework capable and telework ready,” the memo says.

Perdue told the House Agriculture Appropriations Subcommittee on Tuesday that the department has tested its information technology systems to see if they could handle large-scale teleworking by staff.

"We have a lot of people who depend on USDA on a daily basis, from farmers and ranchers to consumers out here, and we have to carry on the work," he said.

He said the department is allowing employees in Washington state to telework but denied a teleworking request by some Forest Service employees who were not affected by the outbreak. He didn't say where they were located.

But Perdue told the subcommittee the department needed broader legal authority to address potential needs for food assistance in cases of school closures and job losses.

A special version of the Supplemental Nutrition Assistance Program for addressing food aid needs during a pandemic was implemented during the H1N1 virus scare in 2009, but its authorization has long expired. “There might be a need for something like that now,” he said.

Another special SNAP program, known as D-SNAP, is limited to natural disasters and could not be used for an outbreak, he said. Recipients may qualify for D-SNAP based on the cost of disaster-related repairs, shelter and evacuation expenses or disaster-related injuries or funeral expenses.

Perdue declined to block implementation of a new rule that makes it harder for states to get waivers from SNAP work requirements for able-bodied adults without dependents. He said states can waive the work requirements on their own for “good cause,” which would include SNAP beneficiaries who are unable to work because of the outbreak. The rule takes effect in April.

USDA is struggling with how to feed children when schools are closed. For schools where more than 50% of the students qualify for free or reduced-price meals, USDA is offering waivers so that all of the kids in those schools can be offered bagged lunches to pick up. Normally, they would be required to eat at school.

Perdue said the department lacks clear legal authority to address the needs of kids in schools where fewer than 50% of students are low income, although he said they could be served at other sites.

“It would be helpful to have blanket authority” to address the needs of all low-income children, he said. 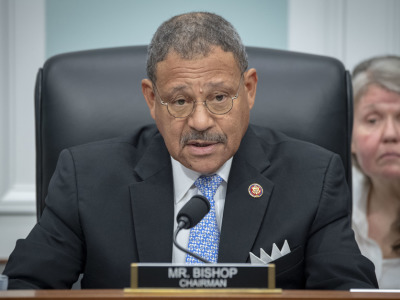 Such changes to USDA's legal authority or expansions of SNAP benefits could potentially be included with an economic stimulus package that President Donald Trump is pushing Congress to consider. "As we craft this bill we want to put together everything that will be needed to provide the needed relief," the chairman of the Ag Appropriations Subcommittee, Rep. Sanford Bishop, told reporters after the hearing.

Bishop, D-Ga., and panel member Rosa DeLauro, D-Conn., appealed to Perdue in a letter Tuesday to work with the Education Department to “develop plans that detail how students will receive access to child nutrition programs before a school shuts down.” The lawmakers also asked him to suspend new rules that would reduce SNAP eligibility or benefits.

A 2018 report by the Food Research and Action Center warned that a pandemic would make it harder for poor people to get food.

"Measures to reduce the spread of the flu by decreasing the interactions between individuals — known collectively as “social distancing” — could quickly have other effects that interfere with food supplies, including children missing school meals, workers losing pay, and access to health care and other basic necessities being cut off.”

The report went on, “Preparation methods that the federal government has proposed for individual households — such as the stockpiling of food and water — pose a significant hardship for populations already struggling to afford the basic necessities.”