Lawmakers are debating the shape of the new Civilian Climate Corps as committees draft a massive climate and infrastructure bill.

Some conservation and environmental groups say the new CCC should create private landowner partnerships with the Agriculture Department to protect soil, both to reduce greenhouse emissions and protect water quality.

Biden signed an executive order in January requiring the Interior Department and USDA to collaborate on a strategy to create the Civilian Climate Corps. The goal is to “mobilize the next generation of conservation and resilience workers and maximize the creation of accessible training opportunities and good jobs.”

Then, in April, he included $10 billion in funding for the CCC as part of his $2.7 trillion American Jobs Plan. An Interior Department spokesperson told Agri-Pulse in an email the department is on track to deliver a report to the National Climate Task Force and looks forward to sharing information with the public in the coming weeks.

Several lawmakers have introduced bills in the last two months offering ways to structure the CCC.

Sens. Chris Coons, D-Del., and Ben Ray Lujan, D-N.M., along with Reps. Joe Neguse, D-Colo., and Abigail Spanberger, D-Va., introduced a bill in April that aims to increase the number of conservation and restoration projects on public lands while helping disadvantaged communities adapt to climate change, and protect biodiversity and ecological resilience.

Rep. Alexandria Ocasio-Cortez, D- N.Y., and Sen. Ed Markey, D-Mass., introduced a separate bill called the Civilian Climate Corps for Jobs and Justice Act that would put half the projects in to "environmental justice" communities, areas where racial minorities have been affected by pollution. CCC participants would be guaranteed wages of at least $15 an hour.

In recent comments to USDA on its strategy for "climate-smart" agriculture, the National Association of Conservation Districts said the new CCC should respond to severe soil erosion due to climate change. The original program also focused on erosion during the 1930s "Dust Bowl" in the Southern Plains.

“If you have tribal producers or young Black workers that are exposed to the farm environment (and) to the natural environment, it can lead to jobs,” he told Agri-Pulse. 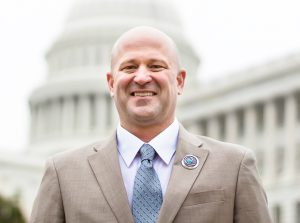 Even if the time in CCC doesn’t lead to a job, the participants will have a better understanding of what farmers and ranchers do and what is needed for the environment, he said.

“People do what their neighbors do. They are always looking over the fence. They’re looking at what’s happening over there,” Crowder said.

In separate comments to USDA about the CCC concept, the Natural Resources Defense Council said grants should be made available to socially disadvantaged producers and small to mid-sized farms that could be used for CCC projects.

“Including private land restoration in the Corps’ scope would build on the legacy of past public works successes, such as the New Deal Era Shelterbelt Program, and greatly expand the impact of such a program,” NRDC said.

Neguse said his bill mostly focuses on the West and Rocky Mountain region. He said that does not mean Biden won’t consider other provisions to help urban areas, too.

There are no Republican co-sponsors for his bill yet, but Neguse said he’s had promising conversations with several GOP members.

Republicans are highly critical of the amount of spending in Biden’s overall infrastructure proposal.

In a USA Today op-ed, Senate Minority Whip John Thune, R-S.D., said there are areas worth looking into when it comes to funding infrastructure priorities.

But he said that “it’s an abuse of the term and, frankly, insulting to the American people’s intelligence to describe billions of dollars for a ‘Civilian Climate Corps’ and for schools to eliminate paper plates as ‘infrastructure.'"

FDR's Civilian Conservation Corps was lifesaving for many young men and their families during the Depression. The men earned $30 a month (worth about $600 today), and $25 was sent to their families.

Participants lived in camps where they got hot meals and were lodged in a “military camp fashion,” according to the National Park Service.

Joan Sharpe, president of CCC Legacy, a group that promotes awareness of the original CCC program, said she has mixed feelings about the current CCC bills in Congress.

“This is nothing compared to what it was during the Great Depression,” she told Agri-Pulse.

Lawmakers can make “a big political hoorah about poverty and poor and how kids need jobs and all that kind of thing,” Sharpe added, but today's poverty does not compare to what was observed during the creation of the original CCC.

In the Great Depression, some men in the CCC were supporting whole families on the $25 and didn’t even own shoes.