Farm and environmental groups that often disagree on ag policy are urging the Agriculture Department to prioritize climate change in conservation programs and to consider changes to crop insurance that would promote the use of cover crops and other carbon-conserving practices.

USDA, which is preparing to release a strategy for addressing climate change, was ordered by President Joe Biden to seek comments on how it should use existing policies and programs. The deadline for filing them was last Thursday, and more than 2,700 were submitted.

Among the common themes: ensure that the Conservation Stewardship Program and Environmental Quality Incentives Program give priority to funding practices that address climate change; increase the number of technical advisers available to farmers, and study reforms to crop insurance that don’t penalize the use of climate-friendly practices or even lower the cost of premiums. Another priority: rewarding in some fashion those "early adopters" who have been following conservation practices for years and can't qualify for carbon credits on measures they have already taken.

“Just as climate change is a multifaceted problem, it will require multiple tools from USDA, the private sector, and other stakeholders as farmers implement solutions on their land,” the National Farmers Union said in a statement that is echoed through many of the comments. 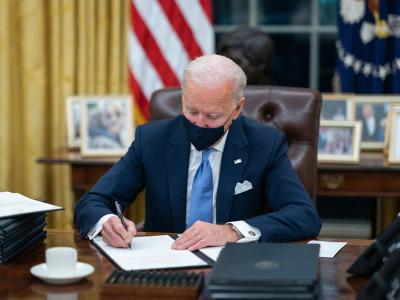 There also is strong support for addressing the needs of farmers who may be left behind by agricultural carbon markets, including small-scale farms and minority producers.

USDA also needs to consider regional disparities, according to the National Association of State Departments of Agriculture, or NASDA. “USDA must consider the local and regional diversity of crops and agricultural practices when determining which tools to make available to farmers and ranchers,” the group said.

There is less unity on whether or how much to increase conservation program spending or what USDA should do to support carbon markets.

The Food and Agriculture Climate Alliance, which represents more than 70 national and state farm organizations, and many nonmember groups support the consideration of a carbon bank at USDA.

FACA issued some broad recommendations on Monday for pilot projects to test ways a carbon bank could be used to get farmers to adopt conservation practices. Beyond that, there doesn’t seem to be a lot of industry agreement on the issue yet.

The Environmental Defense Fund suggests the bank could be used to guarantee prices for carbon credits, but the National Pork Producers Council (NPPC) says the bank shouldn’t buy and sell credits itself. Both EDF and NPPC are FACA members.

The National Association of Conservation Districts suggests USDA provide low-interest "climate-smart bank loans" to beginning and historically underserved farmers. The loans would be tied to the adoption of conservation practices.

The National Association of State Conservation Agencies says USDA has a role to play in structuring carbon markets but "the idea of carbon banking should remain in the private sector. … A carbon credit purchase exercise that is funded annually with taxpayer dollars is not a bank.”

The carbon bank concept faces continued resistance from many congressional Republicans. The ranking member of the Senate Agriculture Committee, John Boozman, R-Ark., issued a statement Tuesday saying that USDA "does not have the authority to create and operate a ‘carbon bank’ as proposed by the Biden administration."

FACA filed comments on behalf of the coalition, and several of its member groups, including the NFU, EDF and some national commodity organizations also filed their own. The American Farm Bureau Federation and the National Council of Farmer Cooperatives, two founding FACA members, largely adopted the FACA comments as their own.

Here is a look at some of the major policy areas and what FACA and individual farm and environmental organizations think USDA should do:

FACA also calls for the USDA's Natural Resources Conservation Service to streamline conservation practices and says the agency should consider the use of precision agriculture equipment as an “important conservation tool.”

Several groups, such as NFU, the National Sustainable Agriculture Coalition, the National Wildlife Federation and the Theodore Roosevelt Conservation Partnership, are calling for Congress to double spending on CSP, EQIP and other conservation programs. Existing programs "meet only a fraction of the need for voluntary conservation on the landscape," NWF told USDA.

Another common theme in the comments that USDA received is the lack of technical assistance for farmers. “In some parts of the country, one NRCS employee may be tasked with serving scores, if not hundreds of farmers across a large geographical region,” NFU said, noting that NRCS had 1,200 vacancies in April 2020.

FACA says USDA should accelerate the approval of private advisers.

The Conservation Reserve Program continues to divide farm groups. The Biden administration is trying to add 4 million acres to the program by increasing payment rates and incentives.

Crop insurance for climate practices gets attention, but is the science there?
Coalition of farm, conservation groups unites on climate proposals
Farm groups welcome return of Vilsack to USDA

FACA is silent on CRP, while NSAC calls for expanding the program, including its Grasslands Initiative, “to explicitly support carbon sequestration goals.” But the National Cattlemen’s Beef Association and NPPC, both FACA members, warn against idling significant amounts of land because of the potential impact on feed prices.

"It is entirely conceivable that climate policies and artificial incentives could be created that would lead to a serious undersupply of acreage for feed grain production,” NPPC says.

FACA wants USDA to create a standing group that would review conservation practices to make sure that “where appropriate,” they are incorporated within the insurance program’s standards for good farming practice, or GFPs.

FACA also wants USDA to do a study of conservation practices and says the findings would “help identify additional ways to assist producers in adopting science-based climate stewardship practices, while ensuring that any steps taken are driven by data and consistent with appropriate underwriting practices.”

The National Sustainable Agriculture Coalition, which isn’t a member of FACA, has some of the most detailed recommendations when it comes to crop insurance. The group says there is more USDA can do to encourage cover crops, including by making sure that intercropping is allowed.

The latest cover crop guidelines remain “confusing and limiting,” says the group, which represents many smaller-scale producers and farms using organic or regenerative practices, USDA also should clarify that all conservation practices and standards as defined by NRCS are considered GFPs, NSAC says.

A major environmental group that isn’t a FACA member, the Natural Resources Defense Council, goes further than many ag groups and calls on USDA to take other steps to lower premiums for farmers who use conservation practices, including by supporting state premium subsidy programs. Programs in Iowa and Illinois have proved highly popular, NRDC notes.

NRDC also said USDA should consider additional insurance subsidies for conservation practices and ensure that farmers are encouraged to plant cover crops when natural disasters prevent them from planting or destroy their cash crops.

“The current methodology used to set premium rates takes into account a farmer’s production history, and as yields improve through the adoption of new tools, techniques, and technologies, rates are naturally lowered to reflect reduced risk,” said the groups, which include the American Association of Crop Insurers, Crop Insurance and Reinsurance Bureau, and National Crop Insurance Services.

Like NRDC, the industry groups took note of the Iowa and Illinois premium subsidy programs, saying they incentivized conservation practices without affecting the program's actuarial soundness.

The National Milk Producers Federation, also a FACA member, said USDA conservation programs “have substantially neglected the areas of manure and feed management, areas that will have a major impact on reducing carbon emissions.”

“Ensuring a risk- and science-based approval process for animal biotechnology products will help farmers and ranchers better insulate themselves and food production from the risks of climate change, and contribute to GHG reductions as well,” FACA says.