Farmland prices up in Corn Belt, mixed in California

Farmland values in parts of the U.S. are on the rise as commodity prices and government payments spur buyers in the Corn Belt while water access fuels the market in California's drought-stricken Central Valley.

The increase comes after farmland values were unaffected by the pandemic, remaining stable throughout 2020.

In the Corn Belt, farmland prices are up 5% to 15%, according to a Land Values Report released earlier this month by the Farmers National Company.

The prices of both high- and low-quality farmland have increased significantly, and pastureland prices have risen modestly as well. The report says farmers are feeling optimistic due to large government payouts in 2020 and increasingly high commodity prices.

Farmers make up roughly 80% of buyers while new investors make up the other 20%, according to Randy Dickhut, senior vice president of real estate operations at FNC. Dickhut told Agri-Pulse that while commodity prices encourage potential buyers, they also help increase incomes so purchasers can afford down payments or have the financial wherewithal to purchase more land.

New investors are looking to capitalize on the current low-interest-rate environment by making long-term real estate investments. However, farmers largely outbid investors unless the investors have 1031 tax-deferred exchange funds that need to be used quickly, according to the report. 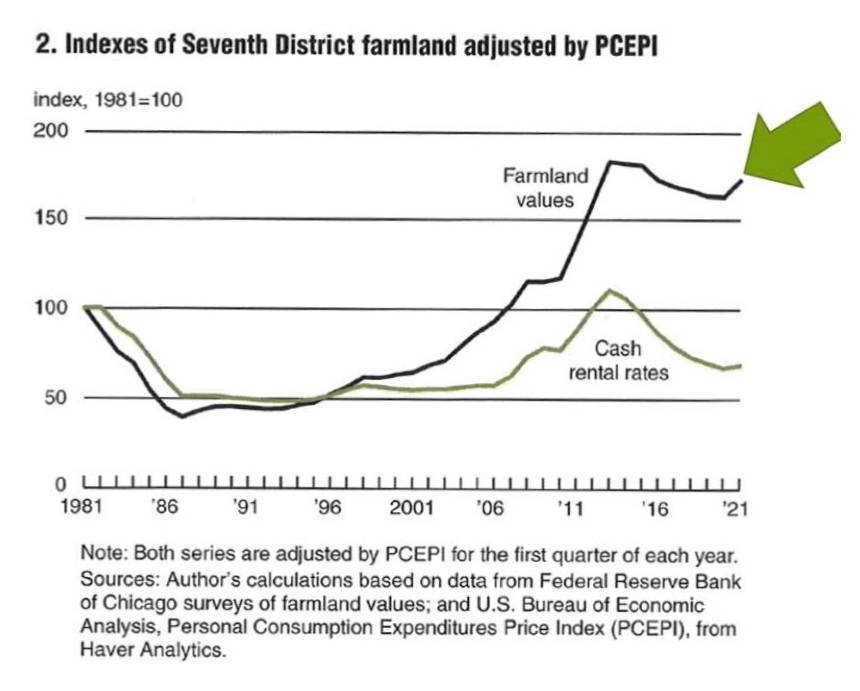 Dickhut told Agri-Pulse he began to receive calls last summer from individuals who had never owned farms but were looking to invest for various reasons; some were concerned about inflation in the long term, others were alarmed by food supply chain failures and wanted to own a piece of the supply chain, and a few wanted to invest in rural real estate to escape the city.

These new investors, coupled with cash-flush farmers, led to an increase in buyers post-pandemic. Auctions, like the ones held by Farmers National Company, allow bidding to drive prices up.

Further, the supply of good farmland does not currently meet demand, making the market even more competitive.

Since farms are a legacy for many families, they can go generations without ever going on the market. However, with high farmland prices and the Biden administration’s potential tax increases, Dickhut notes farm owners who have been considering selling have new incentives to do so.

While farmland values have been increasing for properties with reliable water sources, farmland prices have been dropping in areas where single groundwater sources are being restricted by the Sustainable Groundwater Management Act, said Janie Gatzman, owner of Gatzman Appraisal and co-chair of land values survey for the California Branch of American Society of Farm Managers and Rural Appraisers, during an interview with Agri-Pulse.

Global food prices ease in April, but still up 30% in past year
Higher prices, good weather contribute to rise in planted corn acres

ASFMRA's California Chapter puts out an annual land and lease value trend report that breaks down the farmland values throughout that state’s regions.

In California, farmland values were not impacted by the pandemic, according to ASFMRA’s report.

Gatzman told Agri-Pulse the northern San Joaquin Valley, which roughly includes San Joaquin, Stanislaus, and Merced counties, has seen the greatest increases in farmland value because it contains two of the three sub-basins that have yet to be deemed critically over-drafted by the state. Further, property in these areas generally has two or three inexpensive water sources.

However, the southern San Joaquin Valley is heavily impacted by the drought. There are minimal federal allocations of water in the valley, which also is subject to groundwater pumping restrictions due to SGMA because its basins have been deemed critically over-drafted. The farmland in this area with minimal water access decreased in value.

Gatzman told Agri-Pulse that in the Central Valley she has seen 15% to 20% price increases in areas with reliable water, and decreases in about the same range in areas where water is restricted.

Beyond water, Gatzman said a strong driver of farmland value is the profitability of nut crops.

She said the yields for most nut crop orchards are optimal in the southern San Joaquin Valley but decline as one goes north. However, there's more water in the north. “So, there’s always that tension."

With extreme drought conditions more widespread than they’ve been in 20 years, Gatzman said there has been a greater migration within California from water insecure areas to water secure areas.

Further, “A lot of ag, especially pistachio growers in California who have long history in the market, is moving to Arizona and New Mexico, and buying up land there, even though the water and some areas of those states look a little iffy. Compared to where they're coming from in California, it looks pretty good.”