Home » The California agricultural landscape will look different a decade from now, but maybe not as different as you think
News WEST

The California agricultural landscape will look different a decade from now, but maybe not as different as you think

(Editor’s note: Rabobank’s Roland Fumasi spoke at the Agri-Pulse Food & Ag Policy Summit on Monday but we also captured some of his comments during an extended conversation about this year’s drought impact, industry consolidation and other changes ahead for California agriculture.)

With drought conditions worsening in many parts of California and more water restrictions, farmers will likely idle between 600,000 to 800,000 acres this year, says Roland Fumasi, EVP & North American Regional Head, RaboResearch Food & Agribusiness. That does not include the potential impacts of the Sustainable Groundwater Management Act (SGMA).

While much of the western U.S. is experiencing drought conditions, California is one of the hardest hit. As of June 22, 2021, 100% of the state is experiencing some degree of drought. About 33% of the state has been categorized under exceptional drought, the most intense drought classification. But water access varies greatly by region of the state.

During the last major drought, which ended in 2016, Fumasi said there were about 600,000 acres that didn’t get planted. The number could be a little worse this year because soil recovery from the last drought has limited water availability even more, added the California native.

When it comes to SGMA, Fumasi says “we are still in the early stages.” But some of the water districts are already starting to implement higher costs for groundwater pumping or higher fees associated with trying to conserve groundwater — even though the SGMA plans have not yet been approved by the state.

“We're going to see a lot more groundwater pumping this year than we would otherwise, just to keep crops alive. But that's going to come at a higher cost.”

As a result, “we're going to see less water find its way to thirstier crops like alfalfa, cotton and rice. Some farmers in the Sacramento Valley are going to sell water and plant less rice,” Fumasi said.

The Nasdaq Veles Water Index, which tracks the spot rate of surface water per acre-foot in California, dropped down to $480/acre-foot last winter and as of July 9, was about $841/acre-foot — about a 75% increase.

Fumasi says there'll be growers who will be paying more for water to keep permanent crops alive — whether that's blueberries or pistachios, and almonds in some cases. However, he points to a weak almond market that may complicate decision-making.

“We’ve had a really weak almond market where, if you consider cash costs as well as amortized costs, have been below breakeven, and by my projections are likely to remain relatively weak for the next season, as well.”

Fumasi says we will likely see almonds “being pushed out at a more aggressive rate. And 6-9 months from now, you are really going to see a heightened pace of older almond trees coming out.”

The other challenge with almonds is that they are very sensitive to salinity, he adds. “If you have to rely on groundwater and you don't have enough surface water to blend to reduce the salinity of that groundwater, almond yields are challenged. If you’ve got weak prices and pile weaker yields on top of that, that's a disaster.

However, he says that’s not the case with pistachios, which are more of a salt-tolerant tree. Pistachio markets have held up well and were very profitable over the last 12 months. “You might see people start to favor that crop, because of those two aspects. But that's not to say there won't be some pistachios come out if folks just can't get water,” he adds.

Will flows be impacted by the dry weather? “Absolutely, but our reports from our clients so far report they're still going to have reliable groundwater. That river runs a pretty long stretch so the northern part sounds like it's going to be OK. As you move south and other little pockets on the coast, you start to run into trickier groundwater situations. So, there's going to be some acreage that is reduced.”

But Fumasi says there’s a different scenario in the desert region. “The Imperial Valley tends to rely on Colorado River water, so growers there usually have the most robust water access of any place in California. But given what’s happened, not just now but after that last five-year drought, there has been a lot of contention on Colorado River rights.

“People are really battling for water there, but the Imperial Irrigation District, which would be the biggest irrigation district in the California desert, is still expecting, anywhere from about 80% to 100% flows from the Colorado River, depending on which specific canal is used.

“When you go up to the north coast and the major wine growing regions, they've had some major water cutbacks," he added. "We could see an impact on grapes, to some extent. In certain pockets, even in the Sacramento Valley, it just depends on where you are. There's a big part of the Sacramento Valley that has extremely reliable groundwater and they're going to be fine."

Fumasi says one of the brightest spots of the federal water system in California is the Friant division, which relies on the Friant/Kern canal.

“Where I live in the southern San Joaquin Valley, that allocation still stands at 20%. Not a high allocation, but generally speaking that's typically the segment of the federal system that at least gets the highest allocation down here in the San Joaquin Valley. So, they'll be able to combine some groundwater pumping with some surface water availability.”

Regardless of the current drought and water cutbacks, Fumasi says he’s still sees California as a specialty crop production powerhouse well into the future, albeit one that will look different.

“As I look forward, yes, we will we have less acreage that’s irrigated in California in 5-15 years from now,” Fumasi says. “You'll continue to see some consolidation, which we've seen big time over the last 10-15 years. You'll continue to see farms that have economies of scale buy some of the smaller players.” 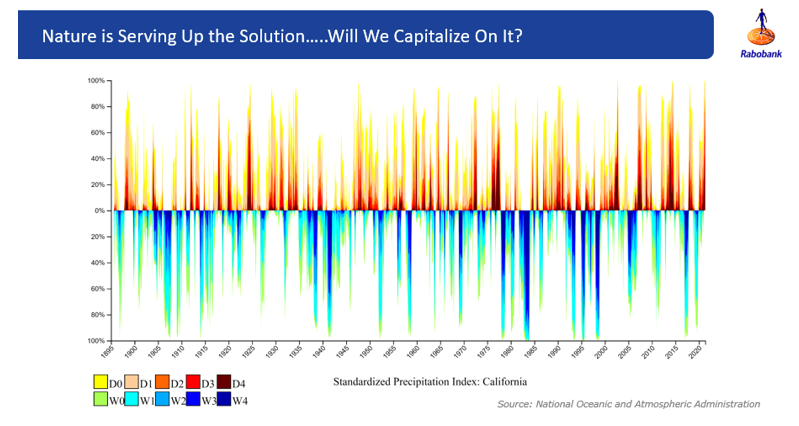 For more news go to: Agri-Pulse.com