Republicans looking to defeat Gov. Gavin Newsom in the September recall election are pledging to minimize the state government’s role relating to the pandemic, drought, labor protections and forest management for wildfires, while leaning on local leaders and industry to fill in the space.

The candidates also agreed on reviving the timber industry to thin forests to reduce wildfires. But they offered few details on how they would help logging mills remain competitive under the state’s many regulatory requirements.

Cox said he would divert funding from high-speed rail—much of which is federal dollars—to spend on more firefighting planes. Faulconer would issue a state of emergency for “treating forests” as wildfire prevention.

The candidates have also promised to build more water storage to prepare the state for future droughts, but were unclear on how they would override the California Water Commission’s role in delineating state water bond dollars for infrastructure projects.

Kiley similarly called for “a systematic review of every regulation that needlessly makes it so difficult to do business in California.” The candidates would have one year to implement the proposals before the next gubernatorial election.

Elder, in an interview with CalMatters, blamed environmental extremists for filing lawsuits to block new construction. He shared concerns gathered at a recent Kern County visit that water was draining into the ocean rather than being stored.

Cox said his business background would define his administration’s response to drought.

“We haven't prepared for this moment, and that's what a businessman does. He prepares for the moment well before it happens,” he told Agri-Pulse. “Gavin Newsom was lieutenant governor for eight years and did nothing about this problem, and now he's been governor for three years. … This should not have happened—and it wouldn't have happened—if we had a businessman as governor, instead of a bunch of politicians.”

The candidates offered to reduce tax burdens for businesses as incentive for staying in California. Cox has pushed for a 25% tax reduction across the board.

Kiley argued taxes have not helped with the state’s longstanding infrastructure issues.

“Gavin Newsom just signed a $267 billion budget, the largest in state history. It's doubled in just the last decade,” said Kiley. “And do you look around and say, ‘Wow, look at these beautiful dams and reservoirs. Look at these perfectly paved roads. Look at our sterling public education system’?” Of course not.” 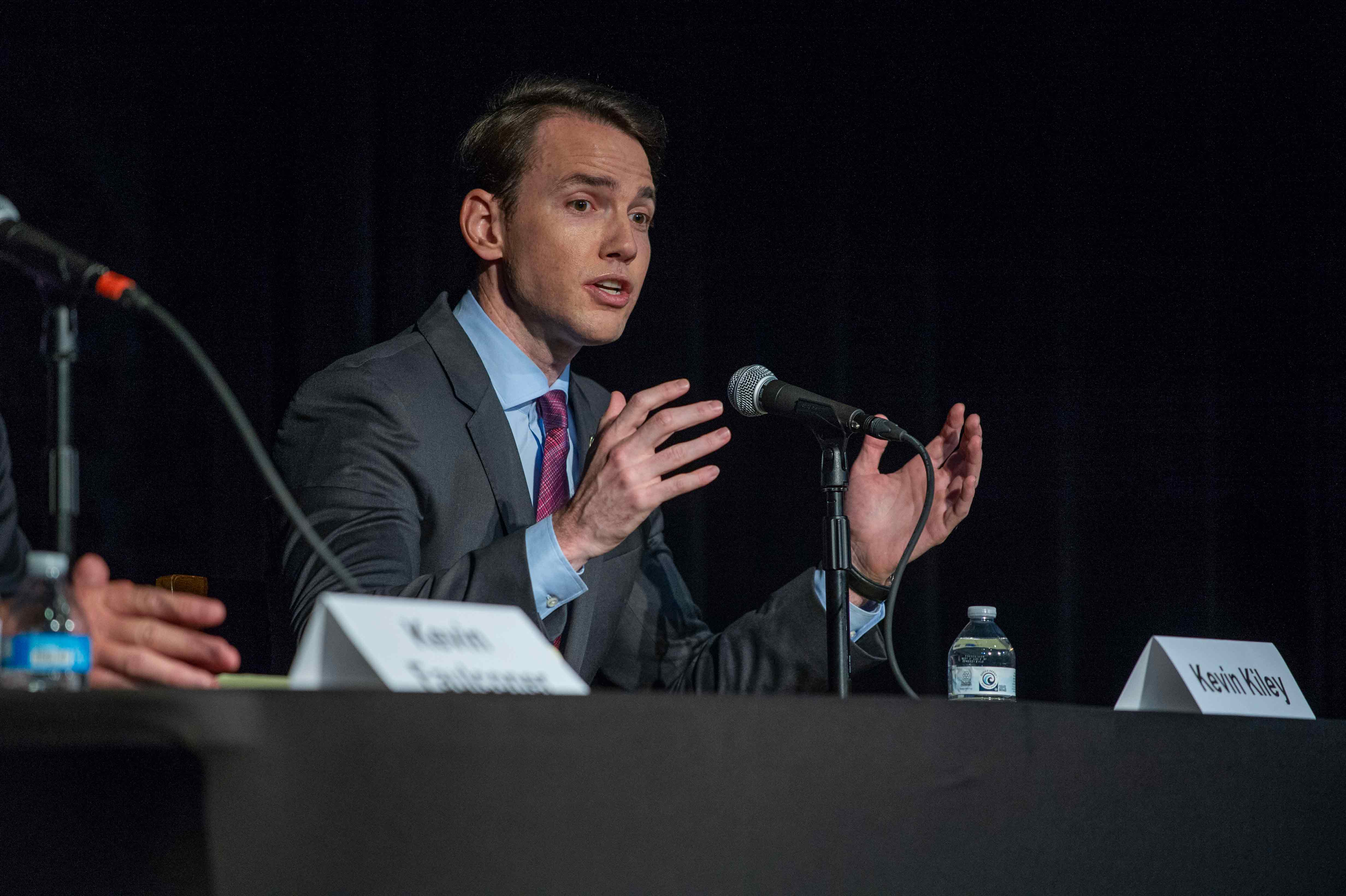 In response to the deepening drought, Newsom said last week that he may mandate water restrictions for residential users statewide after the recall election. When he previously called for a voluntary 15% cutback, the governor hinted a mandate could come next. Agri-Pulse asked Cox if he would issue a mandate and the candidate responded that “sadly we may have to do some cutbacks.”

Kiley strongly opposed a mandate, saying his approach would be diametrically different from Newsom’s. He added that he “absolutely would not have supported” the State Water Resources Control Board’s emergency regulation curtailing water rights in the Delta region approved in early August.

“We know we have more than enough water that comes to us by the grace of God,” he said. “We shouldn't have to live with an environment of scarcity and rationing and cutbacks. These are political choices.”

Agri-Pulse asked Kiley how he would build more water storage and avoid years of litigation that could stall the permitting process.

“Part of my plan is putting in place actions for litigation,” he said. “It's one of the reasons we haven't meaningfully expanded our capacity since the State Water Project in the 1960s.”

Also causing problems in California, he argued, was the Agricultural Labor Relations Board (ALRB), which he called “one of our worst bureaucracies.”

As an attorney, Kiley represented a corporate client in an ALRB case involving United Farm Workers and a union election at the company. He said the ALRB stopped the vote to decertify the union, a decision overturned years later by the California Supreme Court.

Candidates back diet changes, electric vehicles to fix climate
Newsom's drought emergency raises concerns for water rights and the influence of a recall
Daybreak: Feinstein and Central Valley Dems urge Newsom to back off water plan

“That is the sort of state agency that is causing a lot of problems in California in a way that serves special interests rather than serving California workers or just Californians in general,” he said.

Kiley and other candidates also took aim at AB 5, the state’s independent contractor law, which has already survived multiple court battles. The Ninth Circuit Court of Appeals rejected a lawsuit by the California Trucking Association in April, and last week a California judge ruled unconstitutional the Proposition 22 ballot measure approved by voters in 2020 that exempted ride hailing services from the law. Kiley introduced a bill last year that would have repealed AB 5 but failed to gain a committee hearing.

“To the extent that I could reverse AB 5, I would do that,” pledged Elder.

Agri-Pulse asked Elder if he would prevent California’s agricultural overtime law from taking full effect in January or add an exemption for ranchers working on grazing projects that reduce fuel loads for wildfires. Elder declined to comment, deferring instead to Republican Rep. Doug LaMalfa, who represents parts of the Sacramento Valley and was supporting Elder on his press call on wildfire management.

The candidates have largely focused arguments on Newsom’s track record and lean heavily on the emergency executive powers of the governor’s office to enact their policy goals.

The Democratic-controlled Legislature has enough seats to override any veto from a Republican governor. Elder, who has been the primary target of the Newsom recall campaign and leads in polls among the 46 contenders, acknowledged this possibility, but reasoned that lawmakers have not deployed the tactic in more than 40 years, including when Republican Arnold Schwarzenegger held the office.

“I have a lot more power than I thought I did, even dealing with a hostile Legislature,” said Elder.

He added that he would advise Democratic leaders to take Republican feedback into consideration when crafting measures and would appoint new members to the California Coastal Commission, the California Public Utilities Commission and other regulatory bodies “to make things far more sensible, to restrict some of the burdens that make life unlivable for Californians.” Those positions would require legislative approval.

Faulconer, a moderate Republican, said he would seek common ground with Democratic lawmakers.

“If you treat people with dignity and respect, even if you disagree, you can usually find the solutions that are going to work,” he said.

He cited his experience as mayor working with a Democratic super majority in the city council.

“When you phrase things in terms of common sense, in terms of helping people, and people see the actual results, then you gain that support,” he said.

While the California Republican party chose not to endorse any of the candidates to avoid infighting, Faulconer last week took a strong stance against Elder following allegations the radio personality brandished a gun against his former fiancé.

Kiley, however, hoped the party would act as a team. If a Republican wins the recall race, he added, the political dynamic in the Legislature would change completely.

Fearing for their jobs with the upcoming 2022 election, he argued, Democrats would be incentivized to work with a Republican governor, “or face the same fate as Gavin Newsom.”

Kiley also claims to be the only elected official at the state level who refuses all funding from lobbyists and special interests.

“I'm 100% citizen backed, and that is the kind of cultural change in our capital that we need if we're going to turn California around,” he said at a subsequent debate last week.