Roman Leshchenko, Ukraine’s minister of agrarian policy and food, has a vision of creating a global agricultural powerhouse with the initiation of a new land reform program to create a private farmland market and modernization of its Soviet-era irrigation system.

But the 32-year-old leader is realistic enough to acknowledge the obstacles that stand in the way of achievement of his ambitions.

Leshchenko’s outlook tracks that of USDA’s Foreign Agricultural Service, which wrote earlier this year that it sees in Ukraine the “potential to become a major European economy.” The country already “is one of the world’s largest grain and vegetable oil exporters,” said the report by its Kyiv office.

During a little-publicized visit to the United States last month, Leshchenko described the land reform program, launched in July, in an exclusive interview with Agri-Pulse. It allows individual tenant farmers to buy 100 hectares (247 acres) each, “which would mean a couple with three sons could get 500 hectares,” he said. Limitations will be adjusted in 2024, eventually allowing ownership of up to 10,000 hectares (24,700 acres) for one farm operation. Foreigners are banned from buying farmland in Ukraine.

“It is no exaggeration to state that this is one of the most significant landmarks in the 30 years of Ukrainian independence,” he wrote in a blog post for the Atlantic Council in June. Opening the private agricultural land market, he asserted, “will provide a major boost to the country’s already powerful agricultural sector, helping to drive growth while eliminating corruption.”

During the first month of privatization in July, 5,324 hectares of farmland were sold at an average price of the Ukrainian currency equivalent of nearly $1,500 per hectare, according to the Kyiv Post.

Following visits with USDA officials, the Department of Commerce, the Office of the U.S. Trade Representative, the World Bank and other financial agencies in Washington, Leshchenko inspected the Nebraska production facilities of irrigation giants Lindsay, Valmont and Reinke Irrigation. “We have the biggest irrigation system in Europe,” he said, inherited from the former Soviet Union, “but it is now old” so the government has launched a program to upgrade it.

During his U.S. visit, Leshchenko took part in a roundtable organized by the U.S.-Ukraine Business Council with officials of Cargill, Bunge, Archer Daniels Midland and Deere & Co.

Ukraine also plans “big investments in rails, elevators and port improvements” to make up for losses caused by Russian incursions in the country’s eastern section, he said. “We lost about 10% of our agricultural land” when Russian-armed forces took over part of the country, he said, but suffered “a huge problem with infrastructure” devoted to agricultural marketing.

“Today, agriculture accounts for 20% of (the) gross domestic product in Ukraine,” the minister said, “and 50% of Ukraine’s exports is agricultural products.”

“We are seeing record yields this year,” he pointed out, thanks to “fantastic climate conditions” in the country’s southern region. 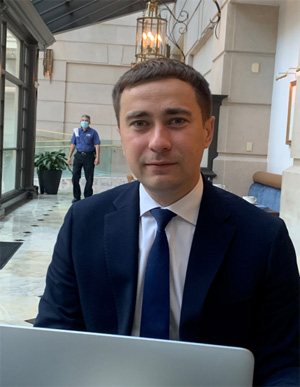 The minister has noted that two-thirds of Ukrainian land, nearly 43 million hectares, is black earth widely regarded as the world’s most fertile, “almost exactly the same size as the U.S. state of California.” He expects this year’s grain crop to be more than 75 million metric tons, slightly more than USDA’s projection for a record wheat yield (30 million tons, up 13% over last year) and corn (39 million tons, up 29%).

While the government in Kyiv may be able to improve its agricultural infrastructure through land reform and better irrigation technology, Leshchenko recognizes that Ukraine’s increasing ties with the European Union could both increase and constrain its potential agricultural productivity. Eying eventual membership in the EU, Ukraine increasingly is harmonizing its agricultural regulations with those adopted in Brussels, including its relatively new “green deal” that discourages chemicals and blocks biotechnology, he noted.

That limitation was anticipated in a USDA report late last year. “The biotechnology regulatory system in Ukraine is still not fully developed, but the country has committed to shape its policy in line with European Union standards,” it said. “Political debate over agricultural biotechnology is active in Ukraine,” with a “generally negative” public view “influenced by propaganda from the European Union.”

Farmers, however, see biotech crops as “more cost-effective and provide a better financial outcome.” Currently, no biotech products can be legally imported or grown, but there are reports of illegal biotech crop planting, USDA said.

Continuing such a policy will see Ukraine’s agriculture becoming more similar to organic, Leshchenko said. “But without biotechnology, fertilizers and pesticides, there is no chance to be the [global] leader in agricultural production.”