As California handles a record drought and a record budget surplus, the state is adding no new money to proposals for surface water storage projects. The latest budget deal instead targets nearly $1 billion for nature-based solutions included in a water and drought resilience package.

Within this allocation, a pot of cash will be available for strategic flooding to recharge groundwater aquifers — a cheaper, slightly quicker alternative to surface water storage. California’s water leaders are touting it as a way to create climate resiliency while returning the system to a time before Europeans arrived and honoring the state’s tribal heritage.

“We have 20th-century infrastructure for 21st-century problems,” said Natural Resources Secretary Wade Crowfoot, borrowing a catchphrase from State Water Resources Control Board Chair Joaquin Esquivel. “That reservoir system did really well for us when there were a lot less people in the state and before the impacts of climate change. With the challenges we have — this more variable hydrology, longer droughts, worse flooding — we can't rely on these reservoirs.” 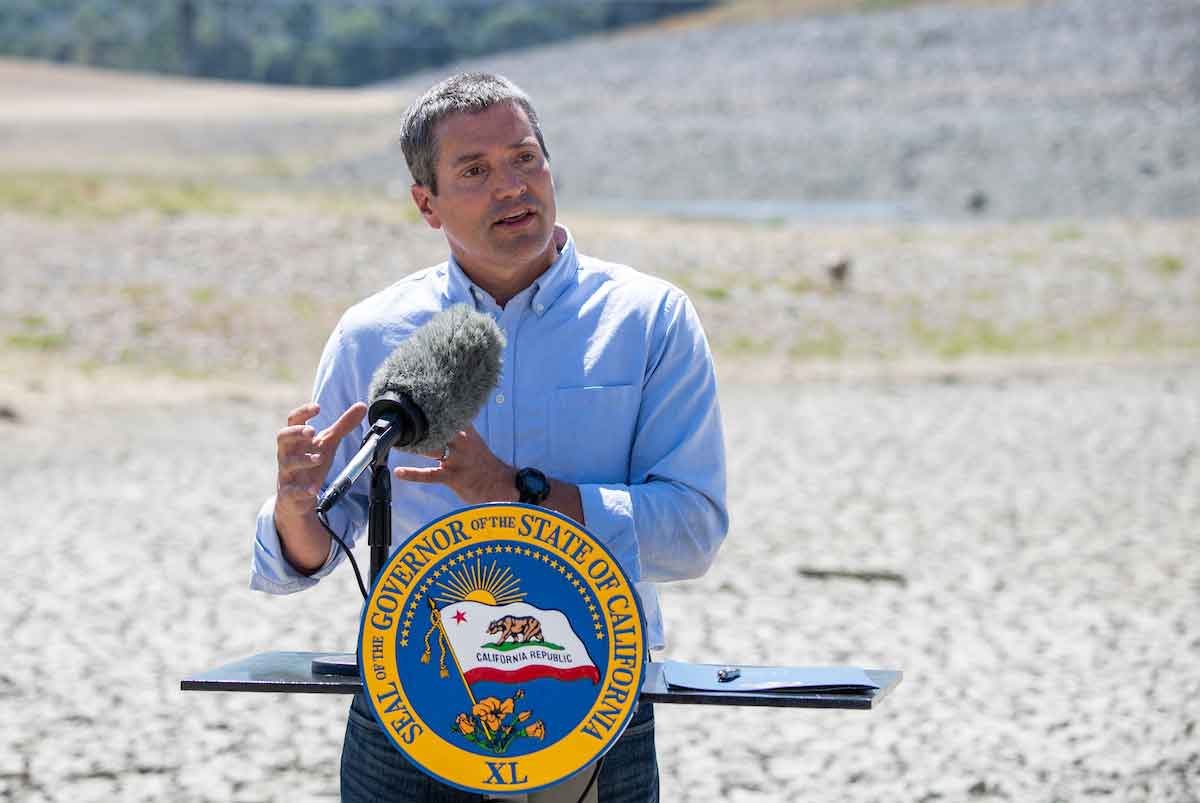 Speaking last week at a town hall meeting hosted by State Sen. Bill Dodd of Napa, Crowfoot then referenced UC Davis engineering Professor Jay Lund, who often points out that the best locations for reservoirs have already been taken and the remaining options would be more expensive for storing water, leading to steep prices for farmers to shoulder.

“We know a lot more today about the impact of reservoirs on fish, including our salmon that supports a fishing industry and is part of our natural heritage,” added Crowfoot.

Esquivel praised California Native Americans for the land management they had conducted for millennia.

“We really didn't understand fully what it was that we came in here and inherited,” he said. “And we made a number of decisions that we're having to reconcile now in the face of climate change.”

Paving over the majority of the state’s wetlands altered the landscape in ways that now require the state to go back and rebuild those natural services, explained Esquivel.

“We're going to have to think differently about storage,” he said, citing examples of water recycling projects and efforts to improve data gathering for water runoff and atmospheric river forecasting.

According to the Public Policy Institute of California, the state’s aquifers have much more storage capacity than the existing surface reservoirs, and groundwater banking can help farmers adapt to less water stored as snowpack and water managers to plan for more extreme flood events. Yet the researchers have also found the current infrastructure for conveyance and surface water storage “is not primed to take advantage of water available for recharge, especially during wet years.” The researchers noted in a separate paper in 2019 that expanding local and regional conveyance infrastructure may be necessary, while also addressing capacity constraints due to damage from subsidence.

According to Nancy Vogel, the new deputy secretary for water under Crowfoot, the Department of Water Resources (DWR) and the state water board are “working hard on making sure that local agencies can capture those winter flood flows and use them to recharge groundwater.” The department is streamlining permit applications for this through an effort Crowfoot calls “cutting the green tape.”

In a budget briefing Friday, Vogel pointed out that the SGMA funding could support some of the infrastructure local agencies need for recharge projects. The budget package allocates another $638 million over the next three years for flood management projects, with DWR likely putting some of that money into multi-benefit recharge efforts. Another $200 million over the next two years will go to repairs for conveyance canals, which is slightly less than the amount dedicated to streamflow enhancement for wildlife conservation and much smaller than the $800 million Senate Bill 559 had proposed for immediate spending on repairs.

On the federal side, the Bureau of Reclamation and the Natural Resources Conservation Service are offering irrigation districts grants of up to $1.5 million for efforts to improve efficiency for agricultural water use in the state. This could support lining canals, improved metering and building weirs.

In signing the budget package on Thursday, Newsom said the state is “investing, yes, in storage. But we define storage broadly — not just the old hydrology of storage above ground, but also below ground.” According to a CalEPA spokesperson, Newsom was likely referring to dollars from the 2014 Proposition 1 water bond. The administration has been encouraging the California Water Commission to speed up the process for distributing that funding for projects like the Sites Reservoir proposal. The commission has faced steady criticism since its 2018 decision to reduce funding for storage projects after finding ecosystem benefits would be minimal. Farm groups have also blasted the commission for delaying that funding.

While Newsom has the power to appoint new commissioners, the body is designed to be a science-based advisory group operating separately from the administration. Prop. 1 granted it new powers to control the purse for that water bond, adding to its role as gatekeeper of federal infrastructure funding.

Crowfoot: State is expediting permits for water storage, restoration projects
Water commissioner full of hope for new storage and for dairy’s future
With a grim outlook for salmon, California looks to upend the status quo in water policy

In an interview with Agri-Pulse on Friday, CDFA Secretary Karen Ross turned attention to a $550 billion federal infrastructure bill that could be up for a House vote this week. The bill includes $8.3 billion for Western water needs, with $3.2 billion allocated for aging infrastructure and $1.2 billion for water storage, groundwater storage and conveyance projects.

Ross cautioned that this type of spending, however, would not help with the current drought.

“There's no short-term dollars that can fix that immediately,” she said. “We just have to be realistic.”

Even smaller water use efficiency projects to improve wells take time to complete, she explained. For those grants, the budget includes $100 million spread over two years.

New large-scale groundwater banking projects have been underway but are still several years from completion. Existing efforts have shown this approach can pay off significantly. However, it requires tedious coordination among agencies and local governments and has less potential for the southern Central Valley without investing in conveyance improvements and moving more water south of the Delta.

Water rights related to groundwater recharging have been the biggest concern for growers as well.

"Groundwater recharge is great," John Duarte, president of Duarte Nursery near Modesto, told the Water Commission in a mid-September hearing on San Joaquin Valley water issues. "But if we don't have the water rights secured and there's not some flexibility added ... that's going to be a challenge."

Duarte added that the state has to improve the conveyance system and weather forecasting to be able to channel high winter flows to recharge sites. He also called it poor resources management for the state to allow excess water to flow to the Delta in "attempted single species management" under the Endangered Species Act.

The state’s immediate response to the drought, however, has been to issue curtailment orders to diverters in several watersheds and to use the main reservoirs to prop up fish populations, while also supplying water for basic human needs and keeping salinity at bay in the Sacramento — San Joaquin Delta. This will likely continue into 2022 as another dry year begins to unfold, meaning no water allocations for south-of-Delta contractors.

DWR Director Karla Nemeth described to the Water Commission how three reservoirs in Northern California — Shasta, Oroville and Folsom — have played a vital role in managing water across the state but are no longer a reliable source for farmers.

“We're not meeting water supply needs south of the Delta with water stored in those reservoirs,” said Nemeth. “Those big reservoirs are really becoming regulating reservoirs heading into this new year.”