Democrats on the House Ag Committee are appealing to their party leaders to protect agriculture spending when they slash the size of the $3.5 trillion Build Back Better bill.

The package has more than $90 billion in ag provisions, including $28 billion in conservation spending, and a separate section on debt relief will be added as well.

“The provisions included in the agriculture portion of the Build Back Better Act will make transformative investments that will benefit agricultural producers and rural communities for years and decades to come,” the committee members say in their letter to party leaders.

It’s far from clear how much the package will be cut, but it could be reduced to as little as $1.5 trillion, if Sen. Joe Manchin, D-W.Va., gets his way.

Keep in mind: Democratic leaders would like to have a bill ready before Oct. 31 so the legislation can move along with a separate infrastructure bill that’s needed by that date to extend authority for federal highway spending. However, there’s no sign that Democrats can agree on a deal that soon.

US presses Mexico on biotech approval

The Biden administration showed Friday it is keeping the pressure on Mexico to lift its effective moratorium on approvals for biotech crops.

Mexico has not approved a new ag trait since May of 2018, and the country recently published a decree stating that the country will outlaw the use of genetically modified corn for human consumption.

USTR in Italy for G20 summit

Today will be U.S. Trade Representative Katherine Tai’s second day in Sorrento, Italy, where she is attending the G20 Trade and Investment Ministers Meeting. Tai is expected to use the two-day conference to also hold bilateral meetings with other trade ministers on the sidelines of the event.

Bringing reform to the World Trade Organization – where the U.S. continues to block the appointment of appellate court judges – was a key topic in the G20 summit last year, and the Office of the USTR says it will be a priority for Tai this year. Tai will be calling for more transparency in government subsidies.

After Sorrento, Tai will be traveling to Geneva to meet with representatives of WTO member nations as well as the International Labor Organization, a United Nations agency that sets labor standard

A new study by USDA’s Economic Research Service finds that federal SNAP benefits support 279,000 rural jobs and increase rural economic output by nearly $49 billion. The increase in rural employment amounts to about 1.18%, more than double the impact of SNAP benefits in urban areas, where the employment increase is about 0.5%, according to the study.

A big reason SNAP benefits have a larger impact on rural employment? Farming and food processing are a much larger part of the rural economy. Those sectors account for more than 14% of rural economic output, compared to about 3.5% in urban areas.

The study is based on SNAP benefits that were paid out between 2009 and 2014, so it doesn’t include the increases provided during the COVID-19 pandemic. 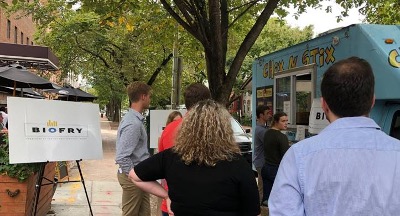 Congressional staff stand in line for chicken tenders and fries at the annual Biofry event hosted by the National Biodiesel Board, American Soybean Association, and North American Renderers Association near Capitol Hill.

The administration has yet to release renewable fuel volume requirements for 2021 and biomass-based diesel for 2022. Under the law that created the RFS, that was supposed to happen last year. The agency is also expected to soon roll out proposals for 2022 biofuel blending, which is to be finalized by the end of November.

National Biodiesel Board spokesperson Paul Winters says the industry needs the numbers as soon as possible. A delay “means that people will be reluctant to invest in higher production volumes,” Winters told Agri-Pulse.

He also expressed the need for higher production levels after EPA flat-lined volumes at 2.43 billion gallons for biomass-based diesel in 2020 and 2021.

Bayer’s pest control business is attracting interest from potential bidders, according to a report from Bloomberg, which said the company is seeking about $2.3 billion.

Among the interested parties for what’s known as the Environmental Science Professional business are Blackstone Inc. and CVC Capital Partners. Bayer said in February it planned to divest the ESP business in order to focus on its core agricultural business.

The Food and Drug Administration has scheduled the first meeting next month on its plan to reduce toxic elements in baby and infant food.

The “Closer-to-Zero” plan was announced in April after a report was released by a House Oversight and Reform Committee panel showing “dangerous” levels of arsenic, mercury, cadmium and lead in the foods.

The subcommittee on economic and consumer policy released another report late last month calling on the industry to conduct finished-product testing.

At the Nov. 18 meeting, “We will discuss foods commonly consumed by babies and young children, the impacts of toxic element exposures at different crucial developmental stages, and the interaction of nutrients and nutrient status as co-exposures to lead, arsenic, cadmium, and mercury on growth and development,” FDA said in today’s Federal Register.

“This recall is a result of a routine sampling program by the FDA which found that a sample from three production lots of Parent’s Choice Rice Baby Cereal tested above the guidance for naturally occurring inorganic arsenic,” the company said in a news release.