Farm groups are scrambling to find common ground with a state administration and progressive lawmakers pushing for new regulations on pesticides, labor and water without bringing agriculture to the table first. Speakers at the annual conference for the California Association of Pest Control Advisors explained how they are bringing together agricultural coalitions in new ways to steer policies toward a more collaborative mindset.

Ruben Arroyo, the Riverside County agricultural commissioner and past president of the California Agricultural Commissioners and Sealers Association, began the conference by describing how the former director of the Department of Pesticide Regulation (DPR) created tension in a longstanding relationship between the department and commissioners before stepping down last summer.

“I don't want to call it chaos, but at some point during the pandemic it was chaos,” said Arroyo. “And it wasn't because of the pandemic, it was because of a gentleman named Val Dolcini.”

At the time, the Legislature had recently approved a new program and funding to incentivize emissions reductions in disadvantaged communities under Assembly Bill 617. The small Kern County city of Shafter was flagged as one of the first communities to participate. In one of the early meetings for the program, Dolcini made promises to environmental justice groups on implementing pesticide notifications. Arroyo was not opposed to pesticide monitoring, since that is his job as a commissioner, but took issue with Dolcini not reaching out to the local ag commissioner, Glenn Fankhauser.

"In this partnership that we have with our state partners, we generally like to talk about things before we actually make promises to groups, and at least discuss what notification means,” said Arroyo. 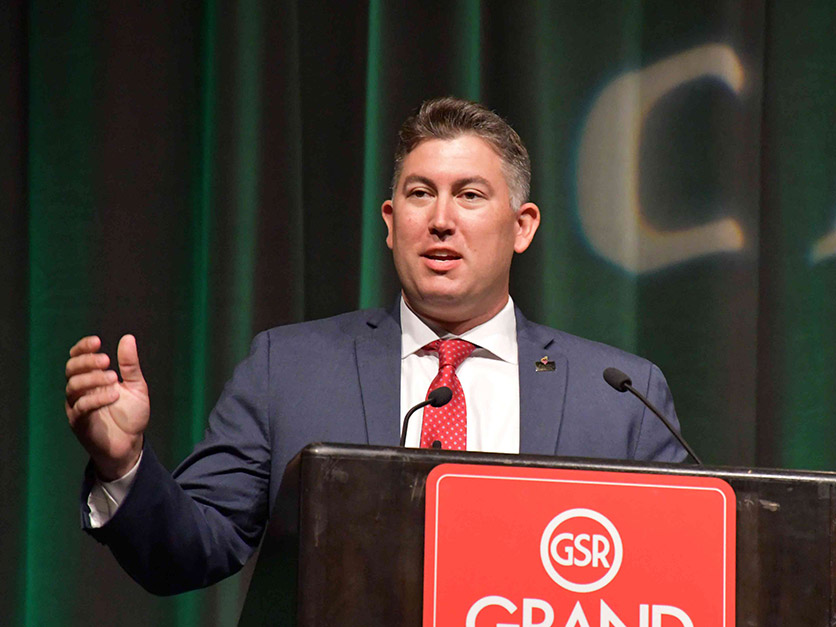 Notifications in Ventura County had drawn activists to a field “and caused a lot of problems,” he said. His office had organized six community education meetings, sending out 20,000 fliers to notify the public—but only six people attended. He guessed about a dozen people would actually be interested in notifications in the Coachella Valley and pointed out that the state already makes the application information available to the public to satisfy environmental quality freedom of information requirements. In a press release, DPR said the notifications would grant people time to close their windows or leave the area, presuming there would be drift. Arroyo noted that the products have already gone through rigorous reviews for both EPA and DPR, and are considered safe if applied according to the label.

“How do we get past that department now that it’s working against the commissioners?” he asked.

“I don’t see this going anywhere fast,” said Arroyo. “We've got a lot of issues to deal with here. … The notification program is being developed for a problem that doesn't exist. That seems to be occurring quite frequently now with some regulations and even with the department, in creating things that don't necessarily have any science behind it.”

It’s not just about communities like Shafter anymore, he added, since programs like this are expanding statewide. He worried about environmental justice groups writing to the Newsom administration, and lawmakers and the state attorney general arguing that commissioners like Fankhauser should be fired.

“To have people from the outside come in and tell us that we're not doing our job isn't a path to go down,” he said.

Before DPR enacts a new regulation, Arroyo hopes to launch a voluntary pilot program in Riverside County and to partner with other commissioners, pest control advisors and farm groups for pilots in other counties, an effort that could lead to “a good regulation” by gathering data and working through the many issues.

“I don't want to ever create regulation statewide,” he said. “I want to help create good regulation through my partners. But I'm not going to help them on things that I don't feel is a valid concern.”

He is also pushing for structural pesticide applications to be included in the notifications, which would encompass homes and golf courses.

Arroyo was also concerned about the involvement of the California Coastal Commission in banning pesticides in some communities and the reluctance of DPR to send staff to testify at these meetings, though the department has written a letter of disapproval to the commission. Arroyo wondered how commissioners could enforce such laws if there is no issue to fix.

Ian LeMay, president of the California Fresh Fruit Association (CFFA), discussed broader impacts to growers. These include new minimum wage standards that make it difficult for peach growers with premium products to compete with those in Georgia. Adding to an existing labor shortage, California’s ag overtime law will be “extremely difficult to work with,” he said, noting that some CFFA members have reduced planting acreage to accommodate a smaller workforce.

LeMay was also frustrated with policymakers over the deepening drought and reduced groundwater pumping over the next 18 years.

“The decision makers that we will have to engage with are showing us right now that they have different visions for how we will mitigate what will most likely be a third year of drought,” he said.

He viewed a new agreement between the Newsom administration and federal agencies over pumping operations for water projects as inadequate, extremely disappointing, and worrisome for the industry.

“The value assessment of the importance of those commodities does not seem to be rising to where I would like to see it with our federal partners,” said LeMay. “It is an uphill battle. The people we engage with see the world differently.”

As local agencies implement plans for the Sustainable Groundwater Management Act and with as many as one million acres expected to be fallowed, the state has a responsibility to be an honest broker and partner to lessen the impact, he argued. With thousands of acres already fallowed this year due to the drought, LeMay pointed out that the air quality index rose to 450 as winds kicked up a plume of dust in the valley.

Joshua Walters, a political strategist with the Alliance of California’s Farmers and Ranchers, explained in a keynote address to CAPCA members that agriculture is not in an ideal situation with Sacramento policy makers, who “don’t pause prior to doing something to understand how it impacts us all.” He described farmers as outsiders looking in and said the industry’s standing has been eroding. The alliance hopes to change that through strategic messaging, sustained engagement and “staying in the fight.”

Walters claimed voters’ defeat of the Proposition 15 commercial property tax last year as a win for the alliance and its targeted approach in providing $1 million to an opposition campaign that highlighted flaws in the proposal, such as taxing solar projects and slowing development toward the state’s renewable energy goals.

The alliance has been backing moderate Democrats for the Legislature to balance the influence of progressive lawmakers. Under new term limits, a wave of politicians will soon term out of office, bringing an opportunity for new faces in the Capitol, and the alliance is building a war chest to invest in those campaigns and searching for new candidates. Walters described how a simple suggestion once led to a two-star Air Force general and attorney for employers running for office, Senator Richard Roth of Riverside.

Yet moderates so far remain outnumbered in the Capitol and often go with the easier choice of siding with progressives to pass a measure, rather than risk frustrating a governor who has the power to veto one of their bills.