Experts on prescribed fires are lauding the progress state policymakers have made to accelerate the practice on private lands. While this puts California on equal footing with other Western states, advocates are quick to point out the number of acres treated with prescribed burning remains far below what is needed to mitigate the impacts of increasingly severe wildfires.

Last year was the worst wildfire year on record, with more than four million acres scorched. Yet lightning and indigenous cultural burning once covered as many as 13 million acres each year, according to M. Kat Anderson, an ethnoecologist at the USDA Natural Resources Conservation Service (NRCS) who detailed the Native American practices in a 2013 book.

Speaking in a webinar last week for the California Climate and Agriculture Network (CalCAN), Quinn-Davidson outlined several benefits of prescribed fire, beyond reducing fuel loads and increasing wildfire and drought resilience for forests and grasslands.

In Humboldt County—where she spends most of her time—and across the Pacific Northwest, fires control fast-growing conifers like Douglas fir that shade out and overwhelm deciduous oak woodlands. On rangelands, it is a tool for controlling invasive species like medusahead, star thistle and barbed goatgrass, as well as for shrub encroachment and coastal grasslands. 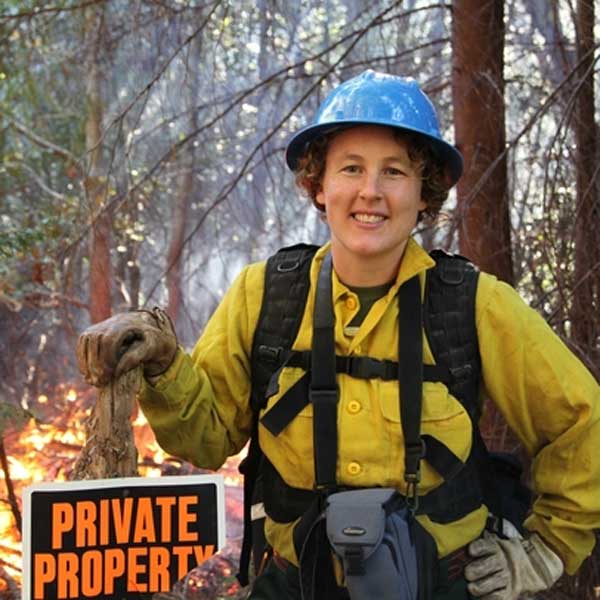 UCCE Fire Advisor Lenya Quinn-Davidson In March, Quinn-Davidson testified to a joint Senate committee hearing on wildfires and insurance that community members and private landowners want to use more prescribed fire, but hurdles remain for liability. By November, lawmakers had responded with new bills passed into law, along with state budget funding to support the practice.

Senate Bill 332 rapidly advanced through both houses with unanimous support. The California Cattlemen’s Association strongly backed the measure, arguing controlled burns protect ranches but state laws place too much liability on burn bosses when a project does not go as planned, acting as a disincentive for working on private lands.

Insurers opposing SB 332, however, called it poor policy to reduce accountability for “one of the most dangerous things one can do in California—start a wildfire,” though they withdrew opposition after amendments limited the scope of the bill.

SB 332 updates a 2018 measure, SB 1260, which established a state-certified burn boss program. It marked the first time California had a certification process that recognized the prescribed fire experience and qualifications of private individuals. Quinn-Davidson led the first class for the program last May, certifying 18 people as burn bosses. She described it as going well beyond an entry-level introduction for planning and leading burns, with the group composed of Forest Service and California fire department (CalFire) retirees as well as experienced landowners, cultural burners and tribal members.

Before SB 1260, CalFire would take charge of every aspect of a prescribed burn and assume all liability, with little room for outside partners, explained Quinn-Davidson. NRCS, meanwhile, would only do prescribed fire projects if a federally qualified burn boss was writing the plan and leading the burn—with only one such private burn boss covering the entire state.

“We really need a whole outside alternative workforce that can do this if we're going to meet the scale of the need,” she said.

SB 332 went a step further by changing the liability standard for prescribed burning on private land for wildfire suppression. Without this, a sudden wind gust or other unexpected factor that pushes the fire out of control and requires CalFire support would result in added costs billed to the landowner.

Beginning in January, landowners will only be liable if found to have acted in reckless disregard for safety and gross negligence. This puts California in the same category as Florida, Georgia, Washington, Colorado and Nevada for gross negligence laws.

NRCS has recognized the new state certified burn boss program and is offering incentive funding for such projects through the Environmental Quality Incentives Program (EQIP). While NRCS is in the process of revising the rates, Quinn-Davidson said they are already generous, starting at about $30 per acre and rising with more complex fuel types. While the program only funds agricultural land, she said the definition is open enough to encompass many types of private property.

Along with the incentive funding, the California Prescribed Burns Associations designed a burn model aimed at driving down costs for communities, meaning a project may cost landowners nothing if done in winter, without hiring a burn boss and while avoiding extra risks, according to Quinn-Davidson. Burning during fire season and hiring a burn boss would cost a couple thousand dollars for a one-day project, she added. NRCS support would offset costs for any pre-thinning or for hiring crews to cut fire lines. By comparison, she estimated CalFire spends about $50,000 for managing a 20-acre burn.

Adding to the federal incentive grants, the state budget set aside $20 million within a wildfire package to establish a prescribed fire claims fund, which acts like a state-backed insurance pool for prescribed fires. Quinn-Davidson described this money as critical for filling the insurance gap for private burn bosses as the state launches its certification program, and California is one of the first states to do so. She noted that the new federal infrastructure package contains funding for prescribed fire projects.

Another measure that passed this year, SB 642, requires CalFire to develop a cultural burning liaison to work with tribes and other cultural practitioners. The new law also establishes a prescribed fire training center. But it failed to add any funding, which will be a focus for Quinn-Davidson as she engages with lawmakers leading up to the next legislative session. She also hopes to address liability issues for damages from prescribed fires, a provision dropped from SB 332 as a compromise for moving the bill forward.

The new liability law and incentive funding present other economic benefits for landowners as well. During the CalCAN webinar, Helen McGrath, who manages Flying M Ranch in Ventura County and serves on the board of the county Farm Bureau, said alternatives to burning can be painfully expensive. Contractors for goat grazing have provided quotes at three times the cost of hiring a landscaping crew to remove the weeds, she added.

Wendy Millet, who directs an 1,800-acre demonstration ranch for billionaires Kat Taylor and Tom Steyer, acknowledged the costs can be steep, after hiring a team of 850 goats for the ranch. She argued, however, that expense pales in comparison to the amount CalFire invests in helicopters each year to fight wildfires, suggesting the state could offer more incentive funding to support communities looking to invest in goat herds for targeted grazing.

Those costs could rise further next year, as California’s agricultural overtime law takes full effect and limits the number of hours ranchers on a grazing crew can work each day. Sheep producers have been pushing lawmakers for an exemption on projects aimed at reducing fuel loads, but have failed to gain any relief from one of the state’s most progressive labor laws.

With a long break in winter storms, prescribed fire crews across the state—and especially Northern California—have been diving into another controlled burn season, with thin plumes of smoke sprouting throughout the foothills of the Sierra Nevada. Every acre of prescribed burning could bring immediate benefits, as the state is expected to plunge into another year of drought and set new wildfire records.