EPA has not been able to quell speculation in farm country that dicamba herbicides won’t be fully available to growers next season, with officials telling state regulators last week that the agency is still deliberating.

But they also said that reports of damage caused by the volatile weedkillers suggest that changes on the labels may be necessary.

“The agency is no longer certain whether over-the-top can be used in a manner that is protective of listed species, their designated critical habitats and non-target plants,” Hathaway told state regulators.

She and Office of Pesticide Programs Director Ed Messina also said they did not know when EPA would decide whether to make changes to the labels.

That uncertainty has caused some consternation among growers who are seeking to make purchasing decisions for next season, or may have already done so.

In a letter last week to EPA Administrator Michael Regan, a bipartisan group of lawmakers expressed concern about a decision to change label restrictions so close to the 2022 growing season.

“Farmers would not be able to readily acquire enough seeds to accommodate a transition” from existing herbicides to alternatives, 13 congressional representatives said. “This is especially concerning given the volume of crops that new restrictions could impact. For example, in 2020, there were approximately 64 million acres of dicamba-tolerant soybeans and cotton grown nationwide, akin to an area more than twice the size of the Commonwealth of Virginia.”

They said transitioning an area that large “would require significant advanced notice under normal conditions, to say nothing of existing stressed supply chains. Seed producers and suppliers typically need at least an entire growing season to produce enough seed to meet a surge in demand for alternative seed types of this immense size.”

In a letter to President Joe Biden last month, commodity and farm groups including CropLife America, the Agricultural Retailers Association and American Seed Trade Association all asked EPA to “avoid label changes that would cause significant seed and pesticide demand shifts that supply chains will be unable to accommodate in the short time remaining ahead of the 2022 growing season.”

State regulators say they just want to be sure they have time to make necessary label changes when EPA does make a decision.

“One of the biggest concerns states have right now is, where are we for the 2022 growing season?” Patrick Jones, deputy director for pesticide programs at the North Carolina Department of Agriculture and Consumer Services and president of the Association of American Pesticide Control Officials, asked at the meeting.

“We need something back as soon as possible,” said Brad Beaver, acting chief of the Illinois Department of Agriculture’s environmental program bureau.

But Hathaway said there was no timetable for a decision. “We'll let you know as soon as we can regarding any decision that might alter the current labels,” she told the state regulators. “But as of now, the current labels are still the law of the land, and should be followed.”

She also said EPA was looking more closely at the impact of dicamba on federally protected species.

Since it was registered for use on cotton and soybeans starting in 2017, dicamba-tolerant seed and its accompanying herbicides have been controversial because of the chemicals' propensity to volatilize and damage other plants, including soybeans not planted with Bayer’s dicamba-tolerant Xtend.

In addition, EPA's Inspector General concluded last year that in renewing the herbicides in 2018, high-ranking agency officials in the Office of Chemical Safety and Pollution Prevention altered or omitted key evidence on damage.

In June 2020, Bayer agreed to settle complaints of drift damage from soybean farmers. That settlement was finalized a year ago, with $300 million set aside for payments to growers.

Last year, the 9th U.S. Circuit Court of Appeals issued a ruling in June that temporarily halted use of dicamba herbicides — including Bayer’s Xtendimax and BASF’s Engenia — at the height of the growing season, before then-EPA Administrator Andrew Wheeler announced new labels, good for five years, on Oct. 27, 2020. 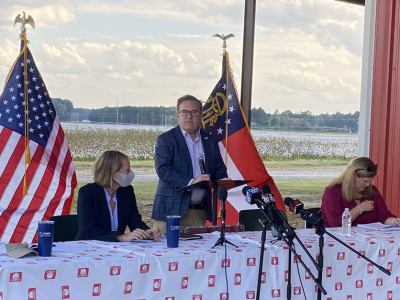 New conditions on the label for 2021 included expanded buffer zones and cutoff dates for use in soybeans and cotton. Despite the presence of those - which many growers, applicators and regulators said were confusing - damage continued.

Even with the new mitigation measures, “some states have reported that this growing season is the same or worse than the 2017 season,” according to a report presented at the SIFREG meeting by the Pesticide Operations and Management (POM) Working Committee.

“Unfortunately, despite the control measures that EPA established in 2020, EPA has received many reports of dicamba-related damage throughout the 2021 growing season,” Hathaway said.

“The agency is extremely concerned by the reports that we've received and is reviewing the available data in order to understand the performance of over-the-top dicamba use during the 2021 growing season,” she said.

“What we're seeing so far is that dicamba-related damage still occurred in 2021, including incidents in counties where additional Endangered Species Act-related control measures were required,” Hathaway said.

EPA sent letters to registrants in September requesting data on dicamba damage. That data has been received but has not been made public.

At the state level, Illinois said it received 179 complaints of alleged dicamba-related misuse complaints in 2021, up from 145 in 2020. In Minnesota, there were 120 “reports requesting an investigation” this year, almost double the 66 received in 2020.

In Arkansas, there were 360 reports of alleged dicamba damage, up considerably from 2020’s 218. But only four violations were identified this year, down from 31 violations in 2020.