Proposals to address competition in the livestock and poultry industry are on the way in 2022, according to the Department of Agriculture, one of the many federal agencies whose actions in the coming year have the potential to affect farmers’ bottom line.

USDA is far from the only part of the federal government with authority in areas affecting the ag and food industries. Farmers and agribusiness in general need to keep a close eye on what comes out of the Environmental Protection Agency, Labor Department, Interior Department and Food and Drug Administration.

For example, the Occupational Safety and Health Administration issued an emergency standard in November requiring businesses with 100 or more employees to have their employees vaccinated. But litigation quickly followed, resulting in a stay of the rule's implementation from the federal appeals court in New Orleans.

The nationwide litigation was consolidated in the Sixth U.S. Circuit Court of Appeals in Cincinnati, which lifted the stay on Dec. 17. The Supreme Court will hear arguments on the matter Friday, Jan. 7.

OSHA said despite the decision reinstating the requirement, it will not issue citations for noncompliance before Jan. 10 “so long as an employer is exercising reasonable, good-faith efforts to come into compliance with the standard.”

The Ag Retailers Association opposed the mandate and expressed support for the Senate’s “symbolic” vote last month to nullify it — action that received the votes of two Democrats, Joe Manchin of West Virginia and Jon Tester of Montana. The Democratic-controlled House has not taken up the measure.

The best place to get an overview of what’s coming is the regulatory agendas issued by federal agencies. The latest came out Dec. 13 and includes timetables for action that, if history is any guide, should probably be taken with a grain of salt.

Some of the regulatory efforts underway that the ag community should keep an eye on:

The Ag Department projected in its spring regulatory agenda that proposals were on their way in November 2021 to better define “unfair, unjustly discriminatory, or deceptive” practices under the Packers and Stockyards Act, as well as the scope of the P&S Act. Another proposal would address the use of poultry grower ranking systems.

The latest regulatory agenda, issued last month, has January as the prospective timeframe for those proposals, but a USDA spokesperson said the timetables in the agenda “should be viewed as a snapshot of USDA’s thinking at the time we were developing the agenda. That is, it’s impossible to account for changes in priorities” and the approval of new legislation or funding that can alter the timeline.

The P&S proposals will come this year, she said, but could not offer anything more specific.

USDA also anticipates issuing a long-awaited proposal to revise organic poultry and livestock standards and a rule to implement an expanded Pandemic Cover Crop Program (PCCP). The program defrays the cost of crop insurance for growers who plant cover crops.

USDA also is working on a voluntary program allowing use of "Product of the USA" labels so, Ag Secretary Tom Vilsack said Monday at the White House, “to allow consumers to know exactly where their resources, their consuming dollar is being spent.”

A potential proposed rule later this year would attempt to make Child Nutrition Program meals and snacks consistent with the 2020 Dietary Guidelines for Americans released in December.

USDA also said its Food Safety and Inspection Service plans to finalize two rules: one updating nutrition labeling for meat and poultry products and another expanding the categories of meat and poultry product labels “deemed generically approved that may be used in commerce without prior FSIS review and approval,” USDA said in a “statement of regulatory priorities” issued with its agenda.

How to define what Congress meant by “waters of the United States” in a way that can withstand legal scrutiny is a major goal of the Environmental Protection Agency, but the agency is being cagey about when a new proposal will be published.

EPA, which has the lead on the new definition with input from the Army Corps of Engineers, is in the midst of a two-step process: It has already proposed what it’s calling a “foundational rule” that will restore regulations to what they were before the Obama administration’s 2015 Clean Water Rule. 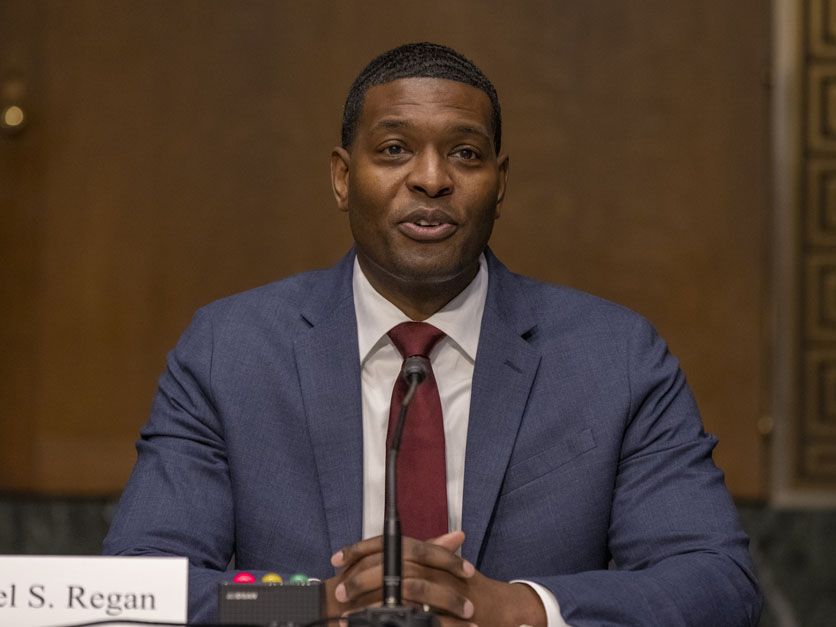 But the agency, Administrator Michael Regan has said, is trying to craft a “durable” rule somewhere in between the Obama rule and the Trump administration’s Navigable Waters Protection Rule, which was invalidated by a federal judge in August.

The recently-published regulatory agenda lists February as the goal for a new proposed definition, but the agency said in a statement this week that “EPA anticipates issuing a proposed rule later this year.” In the meantime, EPA said it plans to continue listening to “diverse stakeholders” as it works through the process.

Regan has said that longstanding farming exemptions will remain, but history has shown that it will be difficult, to say the least, to find a “middle ground” on what’s come to be known as WOTUS, for “waters of the U.S.”

In addition to the WOTUS rulemakings, EPA is working on a variety of regulations, many in the area of pesticides.

For example, EPA plans to issue a final rule this year that would allow for an exemption from both the Federal Insecticide, Fungicide, and Rodenticide Act (FIFRA) and the Federal Food, Drug, and Cosmetic Act for certain plant-incorporated protectants, or PIPs, products created in plants using biotechnology, “as long as their pesticidal substances are found in plants that are sexually compatible with the recipient plant” and meet safety requirements.

The agency also continues to work on expanding current pesticide crop grouping regulations, which allow EPA to establish pesticide tolerances for related crops based on data for a representative set of crops. “EPA expects these revisions to promote greater use of crop grouping for tolerance-setting purposes and to facilitate the availability of pesticides for minor crop uses,” the agency said in the regulatory agenda.

Another effort underway seeks to address pest resistance to Bt corn and cotton by planting non-Bt refuges and taking remedial action. The agency recently released its response to comments on a 2020 proposal and issued a revised proposal.

A major rule expected to be finalized this year involves the way the Labor Department sets wages for farmworkers. The department proposed a rule Dec. 1 that would go back to using the Farm Labor Survey to calculate the Adverse Effect Wage Rates used in the H-2A program. The Trump administration had tried to scrap the FLS, but a federal judge rejected that effort.

Farm and farmworker groups must submit comments by Jan. 30. The regulatory agenda lists no date for a final rule.

Another rulemaking with a potentially large impact on agriculture is a heat standard, but there’s no indication when that might be coming. OSHA is just beginning to go through comments submitted on an Advance Notice of Proposed Rulemaking published in October. That ANPRM sought “information on issues that may be considered in developing a standard, including the scope of the standard and the types of controls that might be required.”

OSHA noted that 18 of the last 19 years were the hottest on record.

Next week: What to expect from the Food and Drug Administration and Interior Department.