Farm groups are concerned the Senate version of the House-passed Ocean Shipping Reform Act won't have the same strong provisions for getting U.S. farm goods onto container ships amid the supply chain crisis.

A draft of the Senate OSRA obtained by Agri-Pulse addresses the fact that ocean carriers are rejecting bookings for U.S. ag exports and sending containers back to China empty, but the measure would do so in a much less prescriptive way than the House bill, which was easily approved in December, 364-60. The Senate bill is authored by Sens. Amy Klobuchar, D-Minn., and John Thune, R-S.D.

Officials representing the U.S. meat, dairy, produce, hay and other sectors tell Agri-Pulse they hope the Senate bill will be strengthened before it is introduced. Hundreds of farm groups and ag businesses supported the House bill authored by Reps. John Garamendi, D-Calif., and Dusty Johnson, R-S.D.

Unlike the Senate draft, the House bill stipulates that vessel-operating common carriers, or VOCCs for short, must not “unreasonably decline export cargo bookings if such cargo can be loaded safely and timely and carried on a vessel scheduled for such cargo’s immediate destination."

Aides to Thune and Klobuchar were not available for comment. 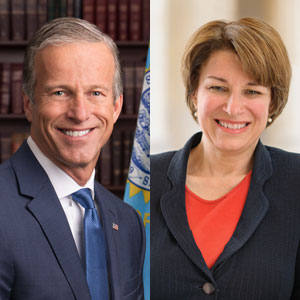 While the Senate bill’s wording is still not as strong as the ag sector wants, it’s a major improvement from previous versions and it is proof that the senators are listening to the ag sector’s concerns, said Peter Friedmann, executive director of the Agriculture Transportation Coalition.

“I have been working in this area for a long time and was very impressed with how quickly the staffs of Sens. Klobuchar and Thune … were able to modify the initial draft and significantly improve it to become closer … to the excellent House bill,” Friedmann said. “It is closer. I’d say it’s not quite there yet, but it is closer and it has some excellent provisions.”

A Hill aide confirmed for Agri-Pulse that the legislation had yet to be finalized as of Monday.

The problem with leaving this key decision up to future rulemaking by the Federal Maritime Commission, ag industry representatives say, is that they don’t know exactly what they’ll get or how long it will take to finish.

Most of the industry officials who spoke to Agri-Pulse about the legislation asked not to be named because of the fluid situation of the legislation on Capitol Hill as well as ongoing discussions with lawmakers and staff.

Meanwhile, industry groups believe the wording in the Johnson-Garamendi bill is nearly perfect.

“The House bill, from our read, is really the near-perfect bill,” said one industry official, who monitors closely the troubles farmers are having getting their commodities to overseas buyers. “They had contracts. Signed contracts. They had freight rates. They had containers and timelines. And a lot of that got thrown out the window.”

The reason producers are having difficulty getting their oranges, hay, wine, almonds, cheese, pork, beef, chicken and apples onto Asia-bound ships is that Chinese exporters are paying VOCCs extra to get containers back to China as quickly as possible, which means bringing them back empty.

The Chinese are paying rates to carriers for U.S.-bound shipments that cannot be matched by U.S. exporters that need to get agricultural commodities to their Asian customers.

The situation is dire, especially for the California ag sector, according to a recent study by the Giannini Foundation of Agricultural Economics at the University of California.

“Recently, for every 10 containers inbound from Asia with freight, approximately eight were sent back empty,” says the study. “In September 2021, the fee for shipping a single 40-foot container (FEU) from Shanghai to Los Angeles was $12,000 versus $1,400 for the backhaul from Los Angeles to Shanghai. … Due to the large difference in freight rates, shippers could not afford to wait for containers to be filled with agricultural goods stateside.”

Meanwhile, perishable U.S. commodities like lemons are rotting in warehouses and producers are scrambling to try to prevent losing whole shipments that cannot get on to vessels.

“Fresh citrus and other fresh produce are facing long wait times leaving L.A., Long Beach and Oakland,” said one California ag official, who asked not to be named. “Exporters are constantly monitoring logistics and moving cargo around to ensure fresh product is being exported so it arrives in good condition at export destinations.”

Groups like the National Milk Producers Federation and the U.S. Dairy Export Council are confident that the House bill by Garamendi and Johnson will help.

“The Ocean Shipping Reform Act is an important move toward ensuring the international competitiveness of our dairy producers is not unfairly limited by abuses from ocean carriers,” NMPF President and CEO Jim Mulhern said after the passage of the bill. “We look forward to working with the Senate to carry this momentum forward.”

U.S. Dairy Export Council Executive Vice President Jaime Castaneda told Agri-Pulse, “We are grateful to Sens. Klobuchar and Thune for their leadership taking this issue up, developing legislation and working to find consensus among their colleagues on this challenging issue.”