With port congestion, pre-pandemic normalcy is still far off

Despite state and federal intervention, the shipping situation for California producers continues to get worse. As agricultural exports nationwide have trended upward, California’s have dropped, as the state loses its export market share to East Coast ports.

State lawmakers are once again seeking policy solutions to the shipping crisis as they launch into another legislative session. The Assembly held a joint hearing on the issue last week with the Agriculture Committee and the Select Committee on Ports and Goods Movement, following up on a November joint hearing with the Senate. With the holiday shipping surge now past, ports are grappling with a wave of shipments for the Lunar New Year and for retailers and manufacturers replenishing their depleted inventories.

Agricultural economists have estimated that California farmers lost $2.1 billion in sales due to port congestion during just five months last year. The state typically exports $21 billion in products, which generates an additional $23 billion of indirect economic benefits across the supply chain, according to CDFA Secretary Karen Ross.

She pointed out that it has been taking at least an additional 10 days for fresh oranges to reach Hong Kong to be shipped throughout Southeast Asia, leading to reluctance among buyers along with requests for compensation when the oranges arrive in poor condition. With shipments backed up, inventories for walnuts and almonds, meanwhile, have doubled over pre-pandemic levels. 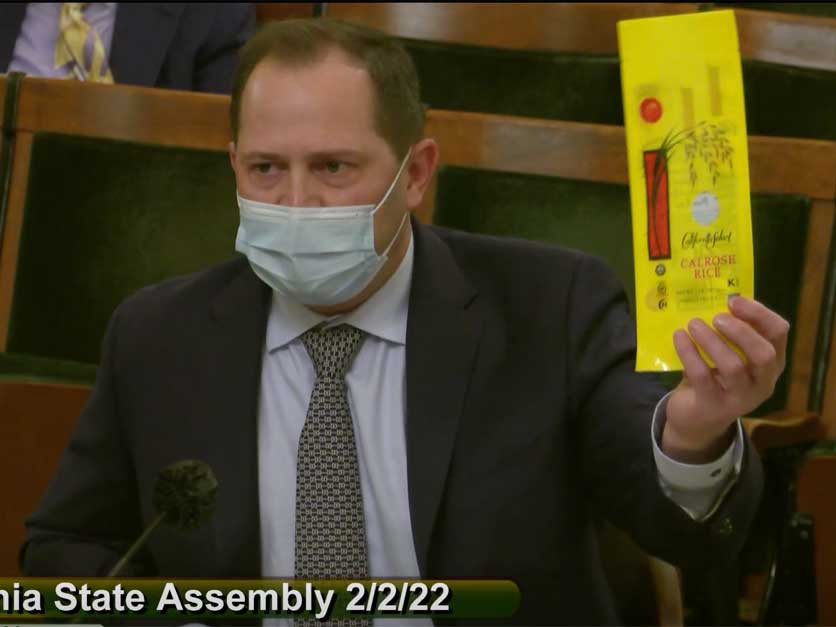 “At this time of the year, they will have cascading impacts for the industry for multiple years, because of decreasing prices and trying to find alternative markets for those crops,” said Ross.

Craig Duerr, vice president of global sales and marketing for Campos Brothers Farms, said the export climate is unlike anything the company has seen in its 37 years of shipping almonds.

He added that the state’s almond industry has seen a price decline equal to another $2 billion from the delays. As almond containers sit for long periods, pests and disease infestations can lead to thousands of dollars in added costs or outright refusal of the product from the buyer, he said.

Commodities have lost significant shares of international markets to competitors. Michael Parr, vice president of international sales for Wente Family Estates, said French, Spanish, Italian and Australian wines are pouncing on these new opportunities. Wine orders are delayed by four months, when they previously took two weeks. Importers are panic buying in a way similar to consumers who were pantry loading at the start of the pandemic, in anticipation of not receiving stocks when they need them. Costco last week canceled a major California wine promotion event in the United Kingdom due to a lack of inventory, he explained.

Costco and Walmart have been importing rice and directly competing with rice growers in the Sacramento Valley as they shift their import cargo from the congested ports of Los Angeles and Long Beach to interior ports in Stockton and the Inland Empire, according to American Commodity Company CEO Chris Crutchfield.

Eighty percent of the California rice previously shipped to the Middle East and North Africa has been replaced by Chinese and Russian rice, said Crutchfield.

“We estimate that more than $93 million-worth of value has already been stripped from our industry just this crop year, which is only three and a half months long,” said Crutchfield.

Water will still flow when the power is off for PSPS
California strikes $5B loan deal on port congestion
Port congestion may be accelerated by urban-rural divide, ZEV mandates and AB 5 uncertainty

The speakers praised recent efforts by the Newsom and Biden administrations to address the crisis. Gov. Gavin Newsom’s proposed state budget for the next fiscal year includes $2.3 billion to mitigate the crisis and support clean energy upgrades at the ports, building on another $17 billion in federal investments through the Infrastructure Investment and Jobs Act.

“I've been in the supply chain for over three decades, and I've never seen alignment like we have right now at the federal, state and local levels,” said Gene Seroka, executive director of the Port of Los Angeles, adding that this funding will use cleaner technologies to better connect the Central Valley and Inland Empire to the waterfront.

California Farm Bureau President Jamie Johansson applauded Newsom and Agriculture Committee Chair Robert Rivas for efforts to increase truck weight limits to 80,000 pounds, but pointed out that Oregon and Washington have bumped theirs to 105,000 pounds. The Farm Bureau is working with Fresno Rep. Jim Costa on a bipartisan measure to increase weights at the federal level.

Several panelists pushed for policies incentivizing or requiring ships to pick up exports in the Port of Oakland, which has been underserved—though the port has struck a deal with USDA to build a new container yard for agricultural exports. Seroka said the California Environmental Quality Act has often inhibited such construction.

When asked about the number of ships currently anchored off Southern California waiting for berthing space, Seroka pushed back.

“I would advise you, sir, politely not to make it about ships,” he told Republican Assemblymember Vince Fong of Bakersfield. “If we had more truckers, if we had more warehouse workers and the ability to absorb this cargo in places like Joliet, Illinois; West Memphis, Arkansas; and Alliance outside of Fort Worth, we could bring more cargo through this port complex.”

Seroka acknowledged the complexity of having individual data systems for each port adds to delays.

“We need to move forward and push aside the obstructionists, who don't want to share data,” he said.

Mike Jacob, vice president and general counsel for the Pacific Merchant Shipping Association, blamed port delays for cascading impacts through the supply chain. A 20% increase on average in the time each vessel spends at port has led to congestion in Asia for returning ships, along with less capacity, longer wait times, higher rates, more costs and less efficiency.

“We are moving more cargo than ever before in the midst of the pandemic,” said Jacob. “But we haven't done it perfectly. It hasn't always been pretty. And there have been a lot of missteps.”

With complaints of ships not picking up exports from Oakland, Jacob cited the country’s trade deficit and reasoned that the robust import economy before the pandemic was able to reduce costs for exporters—with little compensation for shipping companies—and it has subsidized California’s growth.

“We might not be able to make it back to that situation,” he said. “But we want to have the incentives in place to do that.”