Vilsack: Finish phase one with China before considering phase two

The ag sector and lawmakers aren’t letting up on the pressure for another trade deal with China, especially since China’s purchase agreement ended Dec. 31, but the Biden administration still has its focus squarely on the “phase one” deal that was struck during the Trump administration.

Not only has China not come through on several policy promises made in the Economic and Trade Agreement between the U.S. and China — known commonly as the “phase one” agreement — but the Chinese ended up billions of dollars short on their promise to buy U.S. farm goods, and that has to be addressed before the two sides move on, Agriculture Secretary Tom Vilsack told Agri-Pulse in an interview.

The U.S.-China relationship may be at a new low point after President Joe Biden announced a diplomatic boycott of the Beijing Olympics, but the Chinese need to meet several unfulfilled promises in “phase one” to first restore trust before any form of a “phase 2” can be considered, Vilsack said.

“There’s a deficit there,” Vilsack said. “You take a look at what they promised under phase one and look at what they actually did. They came up short about $17.8 billion. So, as (U.S. Trade Representative Katherine) Tai negotiates with her counterpart, the question is … how do you even think about a second phase without making sure that you performed the first phase?” 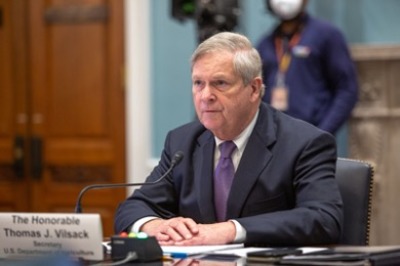 Ag Secretary Tom VilsackChina agreed in the deal to buy about $80 billion worth of U.S. farm commodities over the two years. That’s equal to roughly $73.8 billion of U.S. exports after subtracting freight and insurance costs.

New data released Tuesday by the Commerce Department show that China imported about $59.4 billion worth of U.S. agricultural commodities over 2020 and 2021, the two years covered under “phase one.” That would put China about $14.4 billion below its commitment.

Just Tuesday, Chinese importers contracted to buy at least 132,000 metric tons of U.S. soybeans for delivery in the 2022-23 marketing year, which doesn’t begin until Sept. 1. USDA on Tuesday announced another export sale of 332,000 tons of 2022-23 soybeans to “unknown destinations.”

But Vilsack isn’t just focused on Chinese purchases. He also stressed that there are seven unmet and outstanding policy changes that China agreed to under “phase one.”

A government official provided Agri-Pulse with a list of those unresolved issues, which includes:

Some of these issues, such as China’s promise to overhaul its opaque and sluggish approval process for genetically modified seed traits developed outside of China, continue to have major impacts on the U.S. ag sector, but some issues such as the publication of beef hormone maximum residue levels, are not much of a trade barrier for U.S. ag exports, according to government and industry officials.

China has recently been overhauling the way it approves genetically modified seeds for domestic cultivation, but the country continues to operate an “asynchronous” approval process for biotech traits developed in other countries, and the situation is a significant thorn in the side for U.S. farmers and exporters. China, despite its promises of reform in “phase one,” refuses to begin the process to approve a new trait until after a cultivating country like the U.S. or Brazil finishes the process.

Former Chief Ag Negotiator Gregg Doud “Biotech was the issue I was least happy with in what we got accomplished with China,” says Gregg Doud, the former chief agriculture negotiator at the Office of the U.S. Trade Representative during the Trump administration.

Still, Doud said, China is evolving, and “the opportunity to make additional progress on that topic should be there.”

China is increasing its dairy herd and there is a lot of money to be made selling live cattle to buyers there, but U.S. sellers have been locked out of the market ever since bovine spongiform encephalopathy was discovered in a dairy cow in Washington in 2003.

That’s why U.S. negotiators insisted on a provision in “phase one” that required the Chinese to enter into serious negotiations on a new health protocol that leads to a lifting of the ban.

Bob Bishop, president of the Livestock Export Association, tells Agri-Pulse that China and the U.S. are indeed in negotiations, but so far the two sides are far apart on an agreement. USDA’s Animal and Plant Health Inspection Service is leading the U.S. side in the talks, but China is still insisting on provisions that just can’t be agreed to, said Bishop.

It’s especially frustrating because China is buying a lot of live cattle from Argentina, Uruguay, Australia and elsewhere.

The “phase one” deal is widely credited with opening up China to U.S. beef like never before as well as helping propel U.S. pork exports, but there are a couple of unfulfilled promises by Beijing.

When it comes to beef and pork, the China “phase one” deal has been very good for U.S. exports, says U.S. Meat Export Federation spokesman Joe Schuele.

As part of “phase one,” China approved new U.S. facilities for export and also lifted longstanding restrictions, which “opened up the beef market in a meaningful way for the first time,” Schuele said.

One of those restrictions removed was China’s zero-tolerance for traces of growth hormones in beef, but China still has not put that in writing and the Biden administration is insisting that happen.

China codifying that it will accept international standards for maximum residue levels “is something that we still want to see happen,” Schuele said, but also stressed that the lack of that official action has not resulted in any U.S. beef shipments being delayed or canceled.

“But obviously that’s something you always like to see finalized on paper,” he said.

And then there is the growth promotant ractopamine. China promised to complete a risk assessment for the chemical that is widely accepted in the U.S. and internationally, and the U.S. is leaning on Beijing to comply.

The fact that China maintains a zero-tolerance for ractopamine has not been a major hindrance to trade, but it does make the Chinese market more complicated than that of countries like Mexico, Japan and South Korea.

One major issue of significant concern to U.S. meat exporters that is not addressed in the “phase one” deal is the tariffs and retaliatory tariffs that are still in place. Despite hopes in the American ag sector, the U.S. did not withdraw the Section 301 tariffs on Chinese goods when “phase one” was agreed to, so China did not remove its retaliatory tariffs.

Instead, China agreed outside of the deal to begin issuing waivers to Chinese importers on an ad hoc basis. So far, the waivers have been very effective, and Beijing has not refused to grant them for beef and pork, but the threat is still there.

While U.S. beef is technically exposed to 37% tariffs, Chinese importers only pay 12% — the base WTO duties — while the other 25% is being waived.