Organic industry looks to benefit from push on climate

With climate change mitigation and carbon reduction a top priority of the Biden administration, the organic agriculture sector wants to make sure it isn’t left behind.

Advocates for the industry, which saw sales jump to nearly $62 billion in 2022, are currently discussing their plans and priorities for the next farm bill, with an eye toward strengthening the organic brand and ensuring its practitioners get a fair shake from USDA programs when compared to their conventional counterparts.

Although groups representing producers and companies in the organic space are still discussing how to proceed, some top-line items are emerging. The Organic Trade Association is expected to clarify its goals later this spring, but label integrity, increased research on organics and a higher reimbursement rate for certification costs — which now cover 75%, or up to $750 — are expected to be top of mind.

“Although the USDA Organic label remains the gold standard around the world for transparent standards in agriculture, the sector is losing steam to competing private labels in the marketplace,” Megan DeBates, OTA's vice president for government affairs, says in an upcoming edition of the group’s Organic Report.

One concern is that with the current focus on so-called "regenerative agriculture," which focuses on improving soil health but does not prohibit synthetic pesticides or fertilizers, organic farmers who have been using many of the same conservation practices for years without the synthetics can be forgotten in the climate change conversation.

“I think there's a huge opportunity right now, in, in the organics sphere, because this administration and this USDA is so focused on climate change,” says Rep. Chellie Pingree, D-Maine, an organic farmer, said in an interview with Agri-Pulse. “Frankly, most organic practices, which are really focused on soil health and organic matter in the soil, fit right into carbon sequestration focus that the administration has.”

“We have a lot of rigor behind the organic label,” says Patty Lovera, policy director for the Organic Farmers Association. “People do a lot of recordkeeping and go through a lot to be organic, because it is a high-integrity label.” 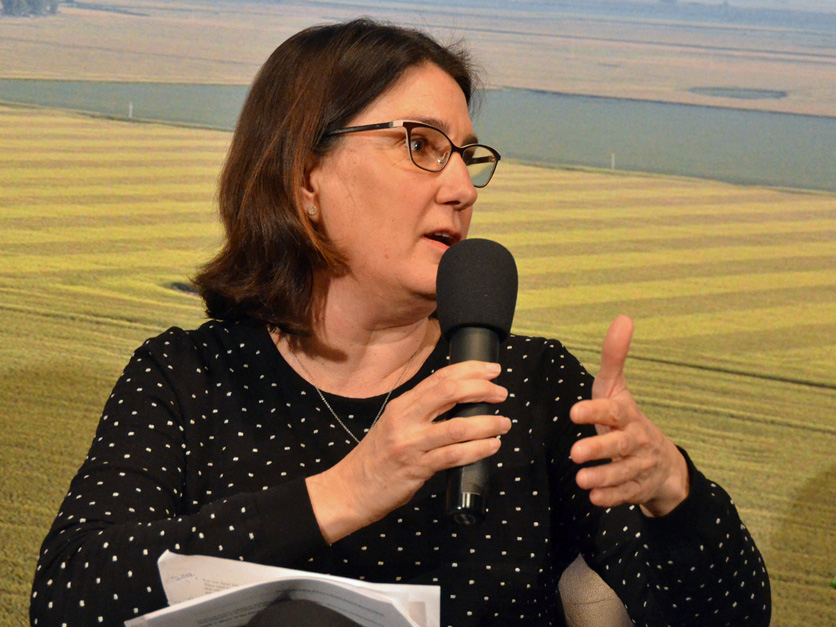 She also said she expects to see some applications for demonstration projects under the newly announced Partnerships for Climate-Smart Commodities to focus on organic farming.

USDA plans to spend $1 billion under the program to measure carbon sequestration and other beneficial impacts of practices such as cover crops, conservation tillage, and use of soil amendments such as biochar.

Pingree says that while the current administration is not as supportive of organics as she would like to see, they are “starting to support practices that are more closely aligned” with organic standards. “We have to keep moving them to also recognize that just regenerative isn't always enough,” despite it often being “a big leap over conventional farming.”

Still, she says “there is a high level of concern with organic farmers that somehow they'll be marginalized again, and everyone will just say, oh well, those are the extremists. We don't need to do that.”

“I would like to see USDA more intentionally looking at the model that they've invested two decades in, to see how that works,” Batcha said. Conservation practices “are documented by the farmers in their organic systems plans,” she said. “They're inspected against their certifiers.”

Organic integrity and enforcement are also front of mind for the sector. But industry priorities for the farm bill could be partially influenced by the content of regulations that have yet to be published — a final Origin of Livestock Rule dealing with organic transitioning of dairy cows, a proposed Organic Livestock and Poultry Standards Rule addressing animal welfare, and a final organic enforcement rule to strengthen oversight of imports. The first two have been under review at the Office of Management and Budget since December.

“One thing we'll have to do in the next farm bill is backfill for anything that they actually don't get right or don't get completed” in those rulemakings, Batcha said.

The industry has been hit with some bad publicity in recent weeks, including an article in The New Yorker about organic grain fraud and a New York Times piece that concluded “Much of the ‘organic cotton’ that makes it to store shelves may not actually be organic at all."

The organic industry has pushed back on some of the conclusions in the Times piece, which looked at the growth of India’s organic cotton industry and said there were not enough organic seeds to produce the amount of organic cotton products in the market.

“The organic standards require the use of organic seed only when it is commercially available,” OTA said. “Non-organic seed may be used if the quality, quantity, or form of an equivalent seed variety is not available. Therefore, non-organic cotton seed may be used provided it is verified as non-GMO, untreated with prohibited substances and approved by the certifier.”

Batcha says she expects the enforcement rule will strengthen oversight by reducing the number of uncertified handlers and brokers. “But we still have a system where the private nonprofit entities that review and approve inputs for use on the farm, in terms of their compliance with organic, operate outside of the accreditation and oversight system for USDA.”

The agency’s National Organic Program, she notes, says its authority does not extend to textiles.

“USDA’s view of their scope of authority really starts and stops with food and agricultural food-based products,” Batcha said.

On the concerns that have been raised coming out of India, “part of the challenge with that is NOP is not seeing and responding to the marketplace,” Batcha said. “For fibers and textiles, their view is they don’t have the authority. So if that requires congressional clarification, then we'll advocate for that.”