Hailemariam Desalegn is a former prime minister of Ethiopia and now chairs the Alliance for a Green Revolution in Africa, a group that works to increase food production on the continent. Hailemariam has been in Washington this week to sign a memorandum of understanding with USDA on behalf of AGRA. We caught up with him at a reception hosted by OFW Law.

The crisis is “already biting … because most of the African countries are importing wheat from Ukraine,” he said. He went on to say that “in the long term, we have to produce (food) in Africa and increase our productivity” to be better prepared for future shocks.

By the way: AGRA’s MOU with USDA is supposed to give African farmers access to USDA research, technology and data that will make African agriculture more resilient to climate change as well as address food safety and reduce food waste. 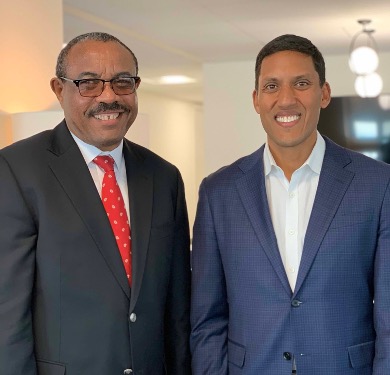 Former PM with Rajiv Shah, president of the Rockefeller Foundation and former administrator of the U.S. Agency for International Development.

The Ukrainian government, in an effort to help companies export ag commodities by railway to Europe, has eliminated the need for licenses to ship corn and sunflower oil, according to the Ukrainian consulting firm APK-Inform.

Ukraine is unable to export ag commodities through its ports because of Russian blockades, but shipments of corn have resumed by rail across Ukraine’s western border.

UkrAgroConsult, another consulting firm, says terminals on Ukraine’s western border can handle loading a million tons of corn monthly for transport. Rail transportation can’t handle as much as exporters would like because of the need to transport people fleeing the country, a Ukrainian government official said recently.

USA Rice Federation members are doing their part to help feed Ukrainians by shipping a gift of 20 tons of U.S. Calrose rice to the country as the Russian invasion continues.

The U.S. medium grain rice was already in Europe and freight forwarding companies assisted in the donation.

“We could not in good conscience watch as innocent people were being killed, starved, and driven from their homes,” Sun Valley Rice CEO Ken LaGrande, Kennedy Rice Mill CEO Meryl Kennedy and Farmers’ Rice Cooperative CEO Rick Rhody said in a joint statement. “We had rice in position, and though it was destined for other customers, we agreed it was urgently needed in Ukraine. And we are thankful our customers understood and agreed.”

The party’s rules committee is considering a new process that could cost Iowa its first-in-the-nation status. Judge says that would be bad for the party.

“Our size allows a candidate with not much money to get in the car and travel the state, listening and talking to voters,” Judge said in an email to Agri-Pulse. “I fear that eliminating the need for retail politics will result in new energetic candidates being unable to compete without the big bucks for paid media, resulting in further isolation from the voters.”

For more on the issue, plus a look at how EU farmers will be addressing the war’s impact, read our weekly Agri-Pulse newsletter.

USDA’s inspector general is looking into the way the department has distributed pandemic relief and is also auditing the ReConnect rural broadband program.

Inspector General Phyllis Fong told the House Agriculture Appropriations Subcommittee on Tuesday the ReConnect audit is evaluating whether grant and loan recipients have been appropriately selected and whether the department has addressed concerns raised previously.

She said the IG will release a report soon on how the Food Safety and Inspection Service performed during the pandemic.

OTA heads to Hill in search of funding, legislation

Members of the Organic Trade Association will be pushing for legislation to benefit the organic industry as well as increased appropriations during Capitol Hill visits today.

OTA is seeking $24 million for USDA’s National Organic Program in fiscal 2023, which would be a boost from FY22’s $20 million. The group also wants to see the Organic Transitions Program at the National Institute of Food and Agriculture go from $7.5 million in funding to $10 million.

Members also will be urging House passage of the Continuous Improvement and Accountability in Organic Standards Act. “The bill for the first time requires USDA to advance and implement recommendations from the organic industry in a timely manner and to ensure the continuous improvement of organic standards,” OTA says.

Laura Batcha, the outgoing executive director, said at Tuesday’s OTA Washington conference she is “really confident that the organization will achieve pretty much exactly what it aims to.”

The Environmental Protection Agency has approved the use of Enlist herbicides in 134 additional counties after re-examining their impact on endangered species, including a beetle and a snake.

In its decision in January reauthorizing use for seven years, the agency had prohibited the use of Enlist One and Enlist Duo in more than 200 counties, causing confusion for many growers who had not been warned about the decision.

Now, the herbicides can be used in six counties in Texas and all counties in Arkansas, Kansas, Minnesota, Missouri, Nebraska, Ohio, Oklahoma, and South Dakota.

EPA said there are still “several counties” where the herbicides cannot be used because of the presence of federally listed species. For more information, see the label amendments for Enlist One and Enlist Duo.

He said it. “Farmers are complaining about fertilizer prices already.” Former PM Hailemariam Desalegn, when asked by a reporter whether farmers in his home country of Ethiopia were feeling the impact of the war. High fuel prices are affecting African farmers, too, he said.