Conservation groups hoping to preserve waterfowl habitat on more than 800,000 acres of land have proposed a $375 million Environmental Quality Incentives Program initiative that would pay farmers to conserve small wetlands and flood rice fields after harvest.

Under the Migratory Bird Resurgence Initiative, the Natural Resources Conservation Service would reserve $250 million in funding for EQIP projects that conserve wetlands smaller than two acres in five prairie pothole states and $125 million for post-harvest flooding in California and four Southern states.

"We think this is a great solution to the issues around the conservation of small wetlands in the prairie pothole region and could bring about a sea change in how these are viewed on the landscape," said Andrew Earl, the director of private lands conservation for the Theodore Roosevelt Conservation Partnership (TRCP).

The proposal was presented to NRCS March 4.

TRCP, Ducks Unlimited and Delta Waterfowl drafted the original proposal, which notes that the availability of nesting habitat for migratory birds in the prairie pothole region has decreased with widespread conversion from grassland to cropland. More than 200 species of migratory birds and over half of North America's breeding duck population nests in the 100,000-square-mile region, they said.

One primary goal of the project is to conserve 336,277 acres of small temporary and seasonal wetland basins found in cropland in North Dakota, South Dakota, Minnesota, Iowa and Montana. It adds up to approximately 56.7% of the estimated total small wetland acres present in the region and would support over 500,000 duck pairs. 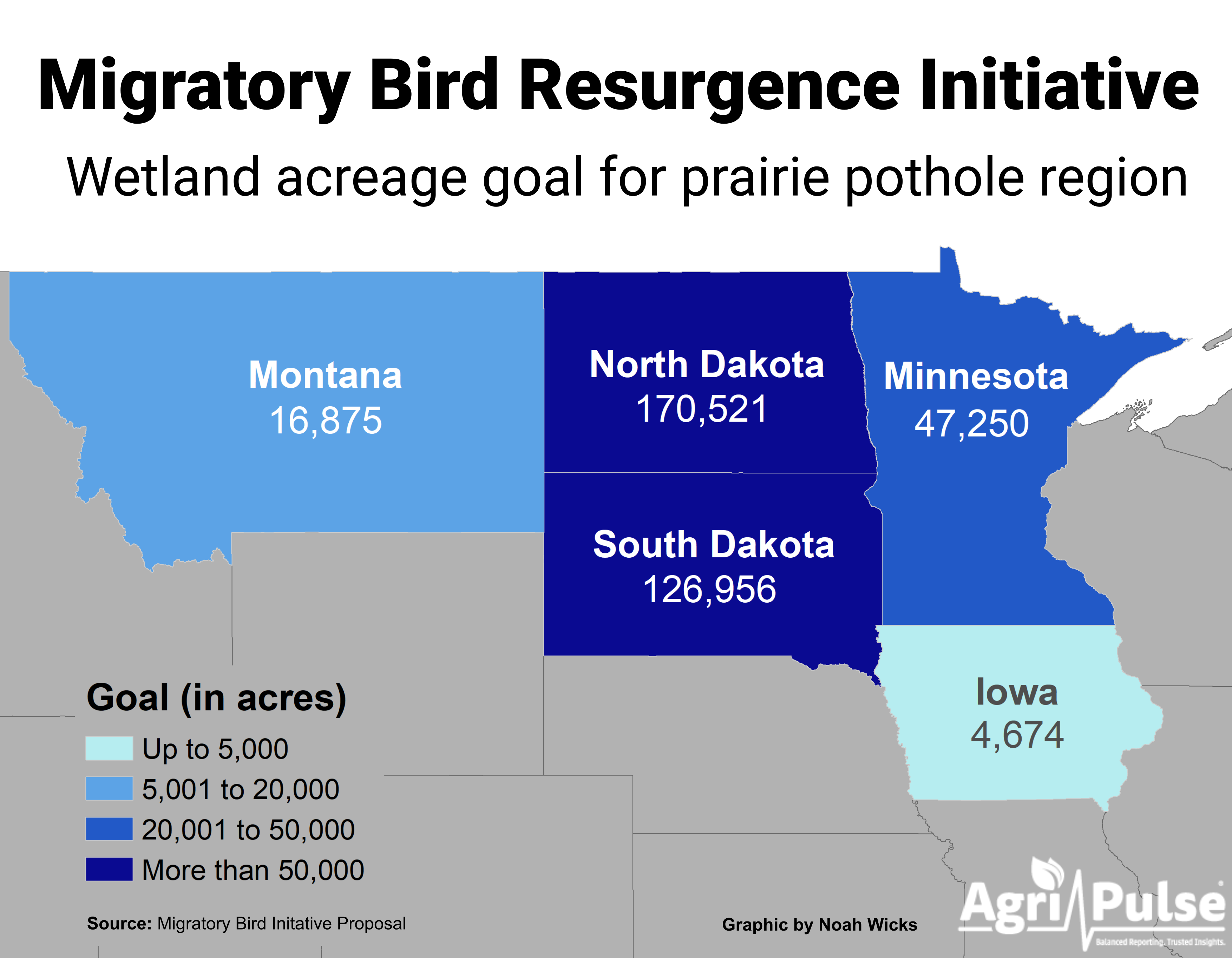 "We have this very unique resource here in the prairies, which are these small, shallow wetlands that are the engine that really drives the duck factory," John Devney, the senior vice present at the Delta Waterfowl Foundation, said. "Without the small wetland resource, we'd just, frankly, have far fewer ducks."

Each winter, migratory birds leave the prairie pothole region, traveling to the warmer climates of Alabama, Florida, Louisiana, Mississippi and Texas. At least a billion of these birds stop in California on their way south, the authors of the initiative stated, taking up shelter in the state's rice growing areas because 90% of the naturally occurring wetlands in the Central Valley are now gone.

According to Kellis Moss, director of public policy for Ducks Unlimited, groups of migrating ducks rely on this habitat to provide them with enough food and cover to meet their daily energy requirements.

"Without a doubt, these flooded rice fields and other post-harvest crop fields have really become an integral part in meeting those duck-energy-day needs for waterfowl," Moss said. 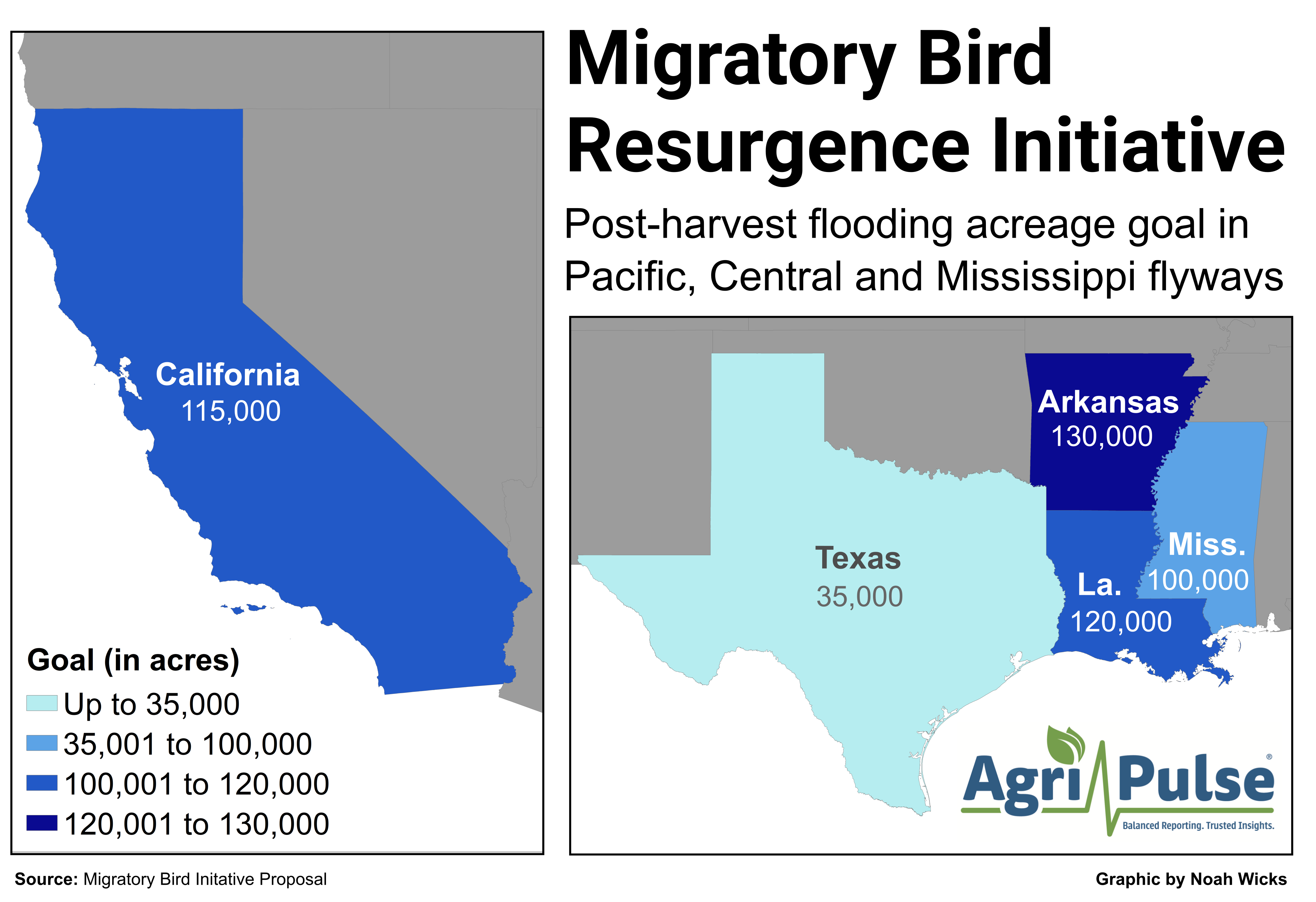 The USDA does prohibit producers who participate in agency programs from converting recognized wetlands to crop production, threatening to yank their crop insurance and conservation program benefits away if they do. This initiative, however, targets small wetlands that haven't been officially recognized by the agency, Moss said.

He also noted that EQIP is a voluntary program, which means producers can choose whether or not to enroll.

Language in the 2018 Farm Bill already supports projects for small wetland maintenance and post-harvest flooding, which means producers can enroll their land even if NRCS does not implement the Migratory Bird Resurgence Initiative.

The agency also implemented the Prairie Pothole Water Quality and Wildlife Program in 2020 to increase the number of small wetland projects in the prairie pothole region, but it does not include projects for post-harvest flooding and is slated to end after the 2022 fiscal year.

"We want to give the state conservationists the resources to participate without having to dip into their EQIP funds," Devney said. "We want to make the dollars we're advocating for additive."