The Biden Administration is working to preempt a potential years-long food supply crisis spurred by the Russian invasion of Ukraine, according to the U.S. Agency for International Development.

Sarah Charles, who heads USAID’s Bureau of Humanitarian Assistance, told a House Agriculture subcommittee on Wednesday that the U.S. is working closely with the Ukrainian government to ensure the country can continue to export amidst the raging war. USAID also is helping Ukrainian farmers gain access to credit to buy “seeds, fertilizer and other core inputs.”

Still, Charles warned the war is poised to create "acute food insecurity throughout the world … for the next several years.” She said the war will likely cause a 10% to 20% increase in commodity prices.

Take note: ExxonMobil is working with Ukraine to address its fuel shortage, and Poland also is helping by drawing from its own strategic reserves, she said.

USDA and USAID are in “very active dialogue” to start drawing from the Bill Emerson Humanitarian Trust to address food aid needs. USAID’s Charles said funding from the account would be used to “bolster existing emergency food operations in countries acutely impacted by this crisis.” 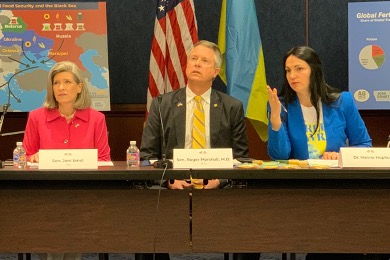 Some Ukrainian leaders are making the case on Capitol Hill that global food security is at stake if their country doesn’t get the military aid it needs from the West. A former chair of the Foreign Affairs Committee in the Ukrainian Parliament, Hanna Hopko, likened Putin’s attack on Ukraine to the famine that Joseph Stalin used to kill millions of Ukrainians in the 1930s.

“This culture of genocide from Stalin to Putin hasn’t disappeared,” Hopko said at a Capitol news conference with GOP Sens. Roger Marshall of Kansas and Joni Ernst of Iowa.

Daria Kaleniuk, who leads a national anti-corruption program in Ukraine, said it’s critical that farmers get the fuel they need for planting. “Fuel reserves in Ukraine were deliberately hit by Russians,” she said.

Costa: Conversations on OSRA ongoing, path forward not yet clear

Rep. Jim Costa, D-Calif., is working on getting the Ocean Shipping Reform Act to the president’s desk. The Senate passed a version last week that leaves out some provisions that were in the original House bill.

Costa, a cosponsor of the House measure, says he’s talked to fellow California Democrat John Garamendi about putting those provisions, which include minimum service standards, in a different shipping bill rather than insisting they be part of OSRA. Garamendi is the House bill’s lead Democratic sponsor.

Costa said, “At some point, you've got to figure out what's the best you can get.”

Why it matters: The House must either approve the Senate bill the way it is – or get the Senate to negotiate a compromise version. The bill is aimed at alleviating port bottlenecks.

In a 5-4 decision issued without any explanation by the majority, the court put the rule back on the books while an appeal proceeds in the 9th U.S. Circuit Court of Appeals.

Chief Justice John Roberts joined in the dissent led by Justice Elena Kagan, who said the states and energy interests were unable to clear the “high bar” of demonstrating irreparable harm if they were not granted a stay of the lower court’s decision.

“The applicants have not identified a single project that a state has obstructed in the five months since the district court’s decision,” the dissent said.

APHIS data on high-path avian influenza back on the web

USDA data on the spread of highly pathogenic avian influenza returned to the internet Wednesday, but without the map that used to accompany it.

The numbers were taken down for about a day due to “a technical issue in data transfer [that] caused an unexpected inflation of the counts on the HPAI Dashboard,” USDA’s Animal and Plant Health Inspection Service said. The map is being worked on.

The snafu briefly doubled the count, which includes laying hens and pullets, turkeys and broiler chickens, to 46 million birds. A reporter cited that number in asking a question of Ag Secretary Tom Vilsack on a teleconference Tuesday.

Infections have been detected in about 23 million birds in 24 states, APHIS said, and the outbreak is still active. Iowa reported two more infections in turkey flocks in Hamilton County in the past two days.

She said it. "I would love for this war to finish quickly but I’m afraid it’s a long story.” - Ukraine’s Daria Kaleniuk, on Capitol Hill Wednesday.