Indian Prime Minister Narendra Modi is trying to use the farming crisis in Ukraine to justify his efforts to prop up domestic farmers by saying his country could come to the rescue of grain-deprived nations.

India’s subsidized wheat and rice stockpiling have made the country’s government a foe of U.S. wheat and rice farmers. Now, with a shortage of affordable wheat in the world as Ukraine — normally a major wheat-exporting nation — battles Russian invaders, Modi is hoping the situation provides new justification to what many say is a system of flouting WTO rules.

Long before Russia invaded Ukraine and shut off the country’s wheat exports by blockading access to its Black Sea ports, India was subsidizing its farmers, helping them to harvest more wheat, rice and other crops, much of which went into storage and then onto the international market. The problem for American farmers is that the cheap Indian grain pushes down prices and stymies U.S. exports.

“The world is facing a new problem now,” according to a translation of a Modi address to India last week, two days after a virtual meeting with U.S. President Joe Biden. “The food stocks of the world are getting empty. I was talking to the U.S. President and he also raised the issue of food grain shortage. I suggested that if the (World Trade Organization) gives permission. India is ready to supply food stocks to the world.” 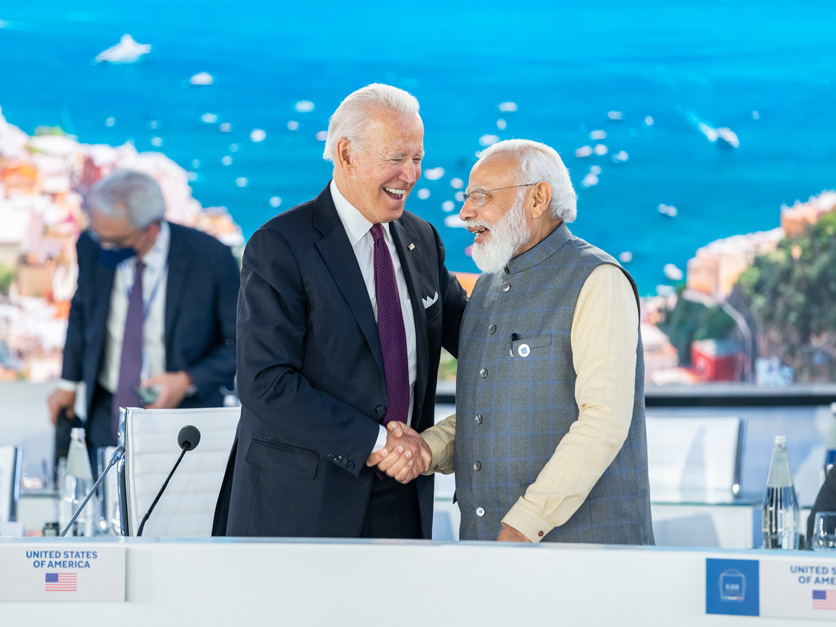 It's unclear what Biden said in the meeting — the White House did not respond to questions from Agri-Pulse — but Secretary of State Antony Blinken appeared receptive to the argument.

“We’re very focused on the impact that the Russian aggression in Ukraine is having on food prices and food availability, and that affects countries in the region as well,” Blinken said in a joint press conference with Indian Minister of External Affairs Subrahmanyam Jaishankar and other officials. “India is looking … at additional steps when it comes to making food stocks more widely available. We’re doing the same.”

But Gregg Doud, former chief agriculture negotiator at the Office of the U.S. Trade Representative during the Trump administration, stressed to Agri-Pulse that India is trying to use the war in Ukraine and the inflationary impact it’s had on world wheat prices to get international support for India’s controversial stockholding regime.

“India’s subsidies lead directly to domestic supplies that far exceed India’s acknowledged need for stockkeeping — stocks the government cannot store effectively,” the U.S. Wheat Associates said in a recent statement. “As a result, the government unloads stocks into the export market, often at prices below what it paid to purchase the wheat.”

Just four months ago the USDA was predicting India would export 5.25 million metric tons of wheat in the current marketing year, but that forecast was pushed up and now stands at 8.5 million. USDA data show India will have 21 million tons of wheat ending stocks this year.

It's become a major issue at the WTO, pitting stockholding countries like India, China and Nigeria against countries like the U.S., Canada and Brazil.

Nigeria — with the support of India and others — unveiled a proposal at the WTO Agriculture Committee last summer that would permanently prohibit any challenges or punishment for government stockpiling programs, even if governments are breaking WTO rules on trade-distorting subsidies to operate those programs.

The U.S., Canada, Brazil, the European Union and Australia immediately objected, and so did U.S. groups like the U.S. Wheat Associates.

“Essentially, India has attempted to create a permanent loophole for certain types of price support programs associated with state-run stockpiling programs,” USW said at the time.

The Office of the U.S. Trade Representative was so troubled by what it saw as India’s over-subsidization of wheat and rice production as well as India’s failure to report the data to the WTO that it submitted a “counter notification” to Geneva in 2018, documenting India’s actions.

“American farmers are the most productive and competitive in the world, and with free and fair trade, they always do well in the international marketplace,” former USDA Secretary Sonny Perdue said at the time. “India represents a massive market, and we want greater access for U.S. products, but India must be transparent about their practices.”

“American rice and wheat producers are operating at a clear disadvantage compared to their competitors, primarily from India, where the government is subsidizing more than half of the value of production for rice and wheat, instead of the 10% allowable under World Trade Organization rules,” the senators wrote. “As a result, we ask that you take immediate action to reverse India’s trend of non-compliance with WTO domestic support requirements by initiating a dispute settlement case.”

India’s agricultural subsidies and stockpiling need to become a focus for the Biden administration as it begins to negotiate the terms for its proposed Indo-Pacific Economic Framework, argues the USA Rice Federation.

“India, Thailand, and Vietnam are all violating their World Trade Organization commitments on domestic support; however, India’s programs are the most egregious,” USA Rice noted in written comments submitted to the USTR on Apr. 7. “India has explicitly admitted to exceeding their 10% de minimis limits for domestic support for rice every year since 2018. The U.S. government and others have countered India’s claims to clarify that if India correctly calculated their WTO notifications, their support levels could be as high as 85% of their total value of production for rice.”