The next version of the Dietary Guidelines for Americans needs to take a close look at the effectiveness of low-carb diets, most commenters told the federal agencies putting together the 2025-2030 DGA.

The Nutrition Coalition, a nonprofit that has urged a close examination of diets low in carbohydrates, said more than three-quarters of the 916 comments submitted to the Department of Health and Human Services and the Agriculture Department, which together run the DGA process, “reflected Americans’ growing awareness about the urgent need to reduce carbohydrates in our national diet.”

HHS and USDA will review the comments as they work on the scientific questions to be posed to the Dietary Guidelines Advisory Committee (DGAC), whose members have yet to be appointed. The DGA was first developed in 1980, but its effectiveness has been questioned given that levels of obesity in the U.S. have skyrocketed. The U.S. obesity rate increased from 30.5% in 1999-2000 to 41.9% in 2017-2020, according to the Centers for Disease Control and Prevention.

This time around, HHS and USDA are emphasizing “the relationship between diet and risk of overweight and obesity with a new emphasis on weight loss and weight maintenance.” They are also taking a look at “ultraprocessed foods” and, separate from the DGA process, plan to examine the issue of “sustainability and the complex relationship between nutrition and climate change.”

HHS also plans to look separately at the issue of alcoholic beverages. The 2020-25 advisory committee recommended lowering the limit to one drink per day for men “on days when alcohol is consumed,” which would have been the same as the recommended limit for women. But the final DGA, which is approved by the secretaries of agriculture and HHS — at the time, Trump administration officials Sonny Perdue and Alex Azar — declined to adopt that, leaving unchanged the recommended daily limits of two a day for men and one for women.

Perdue and Azar also declined to lower from 10% to 6% the amount of calories an individual gets from added sugars.

As complicated as the eventual deliberations of the DGAC will be, just getting a handle on where groups stand can be difficult. 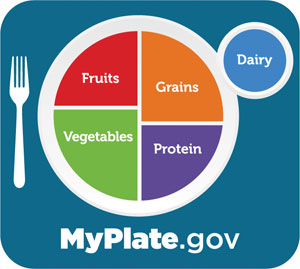 The MyPlate icon has replaced the food pyramid in recent editions of the Dietary Guidelines for Americans.

For example, The Nutrition Coalition, in the same email that said 77% of commenters touted low-carb diets, said the American Heart Association has “come out in support of a low-carbohydrate diet,” but the AHA itself said in its comments that the DGAC should examine “the most popular fad diets,” including “low fat, low carb, high protein, etc., to determine their impact on weight, nutrient adequacy, and health outcomes.”

“Fad diets often attract a lot of attention but may not be based on sound science,” AHA said.

Asked about the seeming discrepancy, TNC President Jennifer Friedlin responded with a link to a paper on cardiovascular risk factors for adults with Type 2 diabetes, called “a scientific statement from the American Heart Association.” That paper says, “Very low-carbohydrate versus moderate carbohydrate diets yield a greater decrease in A1c, more weight loss and use of fewer diabetes medications in individuals with diabetes."

A hemoglobin A1C test is a common way of determining blood sugar levels.

But in response to questions from Agri-Pulse, the AHA said it "does not support a low-carbohydrate diet, as there is insufficient evidence to support any existing popular or fad diets, including the ketogenic diet and intermittent fasting, to promote heart health."

The paper cited by TNC "is a review of research on strategies for diabetes control and includes several studies of low-carb diets but is not intended as an endorsement of them," AHA said.

The agencies’ decision to look at sustainability outside the DGA process received criticism from about 40 groups, who said that the issue should be included in the process itself.

If the sustainability review remains separate, “we urge you to prioritize completing the separate process on a timeline that ensures that the 2025-2030 DGA includes guidance on sustainable dietary patterns,” said the groups, including the American Public Health Association and Center for Science in the Public Interest.

“The agencies say sustainability is important, but without a clear plan to address it within the 2025 guidelines, they’re just paying lip service while U.S. diets continue to push us further from necessary emission-reduction targets,” said Mark Rifkin, registered dietitian and senior food and agriculture policy specialist at the Center for Biological Diversity.

Another issue teed up by the departments is the question of the impact of ultraprocessed foods on weight and health, but many commenters weren’t sure what the term means.

“Ultra-processed foods is not a science-based definition and not related to nutritional value,” the North American Meat Institute said. “Food processing is an important component of ensuring a safe, accessible, affordable, nutritious, and sustainable food supply.”

“We strongly recommend that there be at least one food scientist with robust understanding of how food is manufactured on the 2025-2030 DGAC if a question on ‘ultra-processed’ foods is included,” a group of trade associations that are part of the Food and Beverage Issue Alliance said. FBIA members include the American Bakers Association and NAMI.

The Distilled Spirits Council expressed concerns about taking the alcohol review outside of the DGAC process. The issue of alcoholic consumption should be addressed transparently, however the review is done, the group said.

“Consistent with the congressional mandate and DGA process that has been in place for decades, stakeholders (including the public and the private sector) should have an opportunity to help inform the process, including identifying key research questions,” the DSC said in its comments.

Researchers at Harvard’s T.H. Chan School of Public Health urged more specificity in examining the relationship between the consumption of saturated fats and the risk of cardiovascular disease.

“Identifying protein sources associated with negative health outcomes, rather than solely based on saturated fat content, is of the utmost importance to public health” and would fill address a significant “knowledge gap,” they said.