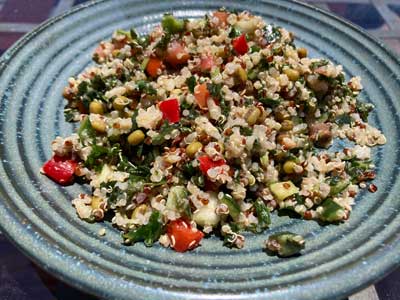 This quinoa salad with peppers, cucumbers, kale, lentils and mung beans was sold at a Costco in California. (photo: Amy Mayer)

As U.S. growers look for more crops that can withstand extreme drought, quinoa, a South American staple, is emerging as a potential option. But growing quinoa presents some challenges that need to be resolved before producers can adopt it into their rotations at scale.

Though technically a seed, quinoa is classified as a whole grain and is a good source of plant protein and fiber. It can be prepared and used in ways similar to grains.

The crop is "very tolerant of adverse environmental conditions like drought or saline soils,” said Anna Testen, a research plant pathologist with USDA’s Agricultural Research Service in Wooster, Ohio. But as a newly commercialized crop in the United States, it doesn’t have a suite of chemical products approved for combatting pests and diseases. Research also is needed into methods of organic production, she said.

Testen has been looking at beneficial microbes, specifically Bacillus bacteria, as a possible tool for promoting growth and reducing disease.

In quinoa’s native regions in Bolivia and Ecuador, particular Bacillus species confer growth promotion on the quinoa plants they share soil with, Testen said. She looked at lambsquarter, a weedy relative of quinoa, grown in Pennsylvania, and found the Bacillus help with growth. She said this relationship suggests a possible avenue to help quinoa succeed anywhere it is planted. 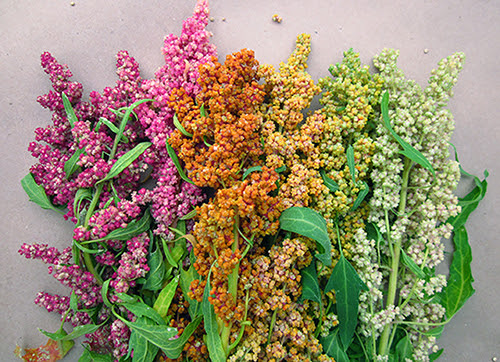 Quinoa varieties used in ARS research. (Photo: Anna Testen)  “If you need to find beneficial bacteria for it right away, just look for weedy relatives of quinoa because they're spread across the world,” she said. The bacteria that help those plants likely will be good for quinoa, too. She said it “would be pretty easy to test in the field. We just haven't gotten to that step yet.”

Colorado and California are two of the early states where quinoa has been grown commercially, though there’s ongoing research in Utah, Oregon, Washington and New Hampshire. In addition to its ability to grow in saline and low-water conditions, quinoa also could be a good addition to a farm’s rotation for its soil-nurturing properties.

Kristine Buckland, an extension specialist at Oregon State University, said one of quinoa’s benefits is that it grows deep roots. “As they start to decay, those are channels in the soil for air and water, for organisms to move through. All of that stuff helps to encourage a really robust soil structure,” she said. That, in turn, helps wet fields drain, provides avenues for future roots and facilitates nutrient turnover. Buckland said quinoa does not do well if it hits high temperatures at just the wrong time, which is why in Oregon it’s done best on the western side of the state.

That’s also a lesson Bryce Lundberg learned. He’s vice president for agriculture at Lundberg Family Farms, which originally grew quinoa near its headquarters in Richvale, California. In addition to the heat, quinoa in that area got hit with pests including aphids, stem bore and lygus. But after experimenting throughout California and as far east as Idaho, Lundberg settled on Humboldt County, California, where about 180 acres of quinoa is cultivated.

“It’s been a really successful crop,” he said. So much so that a national retailer ordered it for bulk bins and Lundberg scaled up to meet that order, placed in 2019. “We grew a really big crop in 2020.”

But after the pandemic shut down the planned bulk bins, that customer never came back for such a large quinoa order. While that opportunity didn’t come to fruition, Lundberg said sales have been steady and he’s got more farmers interested in growing it than he can commit to buying from. “The farmers are so dedicated and so skilled at growing quinoa,” Lundberg said, “and it’s very productive.” He said they’re seeing yields of 2,000 to 3,000 pounds per acre. Lundberg provides dry mill processing at its headquarters.

For Oregon growers, access to processing remains a considerable hurdle, Buckland said. In order to be sold as a food product that does not require washing at home, quinoa has to be cleaned in a way that removes saponins, which are a bitter coating on the seeds. Existing processors are too far away to make quinoa a viable crop economically in western Oregon.

“That has been a major obstacle across the board over the last several years,” Buckland said. Still, figuring out the right growing conditions, timing of planting and harvesting and potential ways to protect it when it’s in the ground all are important steps toward courting potential investors in processing. 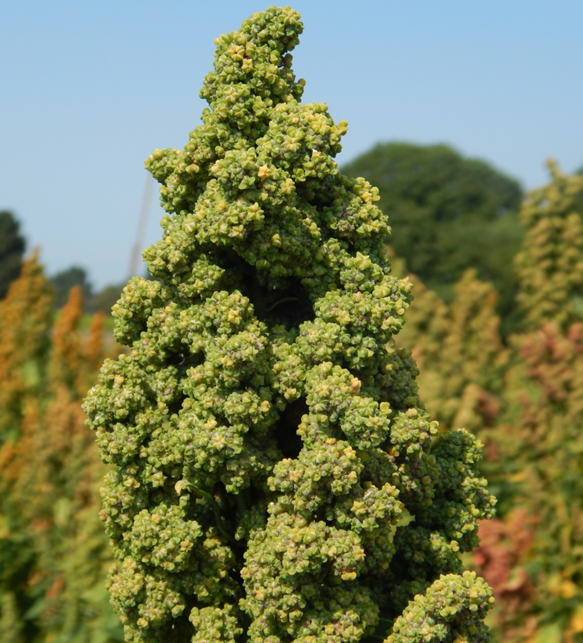 Testen said future research on exactly how to pair Bacillus and quinoa will likely come from industry or in a public-private partnership, but as growing conditions change and force producers to look at new and different options, it may be a crop that gets increased attention. Her quinoa research began at Pennsylvania State University. Washington State University also conducts quinoa research, with Lundberg Family Farms as one of its partners and funding from the Foundation for Food and Agriculture.

For now, most quinoa is still imported from South America, though Lundberg is hopeful customers in the United States will begin demanding more domestically cultivated quinoa.

“We’ve accomplished commercialization,” he said. There could be room for others.