A unified valley is inspiring state climate and drought solutions

As the drought deepens and climate action heats up in California, the Water Blueprint for the San Joaquin Valley is gaining a foothold with leaders in Sacramento.

The self-titled “coalition of the willing” has brought together farmers, water districts and community organizations to press lawmakers and the governor on investing in water infrastructure to offset declining surface deliveries and the slowing of groundwater pumping.

Last month the Blueprint coalition teamed up with urban water districts on a $6.5 billion budget request to bolster drought and flood resilience. The state must “avoid a calamitous water shortage and subsequent environmental and economic degradation” by improving water management and increasing conservation and storage, among other measures outlined in a letter to Gov. Gavin Newsom and legislative leaders.

The request comes as water rates in coastal cities have increased as much as 141% since 2010 and as the state paid down $900 million in water bill arrearages last year.

The proposal would bump up spending on repairs to conveyance canals to the same level Sen. Melissa Hurtado of Sanger proposed in SB 559 last year. Another $1.25 billion would support shovel-ready projects that bring new water supplies to the valley.

The letter also includes a request for flood protection investments. This comes as the state’s new flood protection plan for the Central Valley reports that as much as $30 billion is needed to protect California’s farmlands—nearly double a 2017 estimate.

Last week the Blueprint hosted a meeting at the California State University, Fresno, with more than 100 stakeholders in attendance. The meeting marked the release of a framework of near-term solutions to grow water supplies, improve the conveyance system for deliveries and build climate resilience. The coalition identified 150 groundwater sustainability projects to expedite through a $1.5 billion allocation, with the goals of capturing stormwater, increasing groundwater recharge and incentivizing water recycling. The Blueprint is also proposing $1 billion for a program that repurposes fallowed farmland, doubling a Senate budget proposal and going far beyond the $50 million spent in 2021. 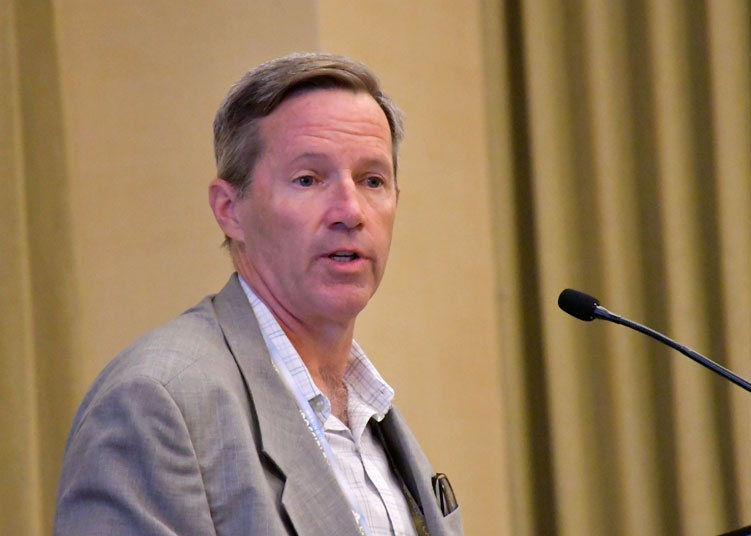 The requests struck a chord with state officials who are racing to keep up with the worsening drought conditions.

Paul Gosselin, who directs groundwater management at the Department of Water Resources, called it critical for the state to maintain local control of its basins.

“The work that you laid out today in this entire package really speaks to why that's so important,” said Gosselin. “None of this could be driven from the state on down.”

He described how the department will be following the lead of the Blueprint when allocating more than $350 million to support the implementation of the Sustainable Groundwater Management Act (SGMA), particularly for groundwater recharge projects.

“Time is of the essence,” he warned, noting that California may have only four wet years to capture flood flows during the 20-year timespan for SGMA. “We better be using these funds in a way that actually delivers the goods.”

According to the Public Policy Institute of California, the state may have sent as much as 70 million acre-feet of water to the ocean during the last flood event in 2017. Erik Ekdahl, a deputy director at the State Water Resource Control Board, was surprised how quickly California descended into the next drought and returned to a point of counting every drop. He said the water board has been responding by streamlining the permitting process for recharge projects, reducing it from as long as 20 years to just three months.

But he shared a sense of doom with the loss of about a million acre-feet of water to evaporation and dry soils last year and a snowpack that plummeted from 70% of average to zero in a few weeks.

“That's a vision of the future,” said Ekdahl. “That is what climate change will look like.”

That sense of urgency was felt across the administration.

“Preparing for a hotter, drier future is driving everything right now,” said CDFA Secretary Karen Ross, in describing a record $100 budget surplus that has arrived ahead of a recession that could start as early as next year. “To see the drive towards a unified voice is the single most important thing that can happen from the valley.”

California is spending big on repurposing farmland, but critics say boosting food production during drought is a better goal
A heat-induced drought now, an ArkStorm next: Once-theoretical disasters are sending California farmers on a climate rollercoaster

Ross recognized a paradigm shift away from individual stakeholder groups competing over budget spending requests and applauded the Blueprint for making the solutions digestible and for providing clear benefits for multiple interests, adding: “You're definitely on the right track.”

Ross described how the drought and climate change have been forcing the administration to rethink the state’s investment priorities. South of the Tehachapi Mountains, she explained, everyone is focused on water recycling projects for cities—a central component of Newsom’s list of priority actions under the Water Resilience Portfolio.

Ross recognized that farmers will have to take a considerable amount of land out of production to balance aquifers under SGMA—up to a million acres, according to a UC Berkeley estimate. She pointed out that the state has already stopped irrigating nearly a million acres of farmland since 2012 and stressed the need for flexibility in replanting once-fallowed land.

“I do not want to mortgage our future food security because we purposely—and for perpetuity—fallowed land that may not need to be fallowed,” said Ross, adding that the state cannot “lock up” too much of that land either.

She acknowledged how far California agriculture has come in producing more food using fewer resources but cautioned that farmers will have to continue to do more with less. Under the Brown administration in 2014, CDFA launched a grant program for water use efficiency, known as SWEEP, which has now distributed $50 million for projects and become the cornerstone of a suite of climate-smart agriculture programs. She hoped to scale up the effort further by partnering with irrigation districts or groundwater sustainability agencies on specialty crop block grants.

“Now is the time for us to be thinking about that,” she said, adding that the administration and lawmakers will be negotiating water investments in budget trailer bills potentially through August. “Can we start thinking through a new and different way of getting the water out to the most impacted irrigation districts?”

Newsom proposed $60 million for SWEEP in the budget and hinted that it “could be plussed up,” particularly to help expand new technologies. CDFA, for example, made $2 million available this year to support dairy farmers in growing forage through subsurface drip irrigation that uses cattle effluent.

Ross sympathized with stakeholder concerns that a draft update to California’s Climate Scoping Plan appears to leave out food security.

“I have never in my professional lifetime seen the crisis of food security, hunger and starvation that we have right now,” she said, describing combined impacts from the war in Ukraine, a crippled food system in Africa, the economic devastation from COVID-19 in California and now inflation spikes in food prices. “We have the highest number of people going to the food banks now.”

Ross juxtaposed the food crisis with ongoing pushback in California against almonds over water use.

“The idea of exports in a global market is becoming less popular and less acceptable,” she said.

During an Air Resources Board hearing last week on the state’s climate plan, Ross pleaded that climate change is “coming at us much faster” than anyone ever anticipated and “we are losing out on opportunities to self-correct on this.” She called for “working together aggressively to save agriculture” and protect communities.

That sentiment is already driving the collaborative spirit behind the Blueprint and grabbing the attention of water agencies in Sacramento. According to Gosselin, while the Blueprint’s approach and its solutions are helping the Legislature to prioritize future water funding, it is already informing agency programs about the local needs.