Every week, if not every day, it seems there are new headlines about the difficulties people face in many parts of the world, including the U.S., in getting enough nutritious food to eat.

The World Bank said this week that the costs of a healthy diet are 50% higher than the bank’s extreme poverty line. And Purdue University’s College of Agriculture reported July 13 that in the U.S., Gen Z households — referring to people born after 1996 — are having a harder time obtaining adequate amounts of food than their older counterparts.

“Since January, over 30% of Gen Z adults have experienced or are experiencing food insecurity compared to about 17-19% of Millennial (those born from 1981-1996) and Gen X (1965-1980) adults and just 7% of Boomers+ (before 1965),” the Consumer Food Insights report said. “Although Gen Z reports lower incomes on average, which can show up in the food security calculations, this disparity is concerning at a time when food inflation is outpacing salary growth.”

A highly anticipated White House Conference on Hunger, Nutrition, and Health will bring together experts and advocates in September to discuss, as the name implies, the intertwined issues of hunger and nutrition and how they affect health. But it may take years to determine what type of impact — if any — the conference will have.

The first White House conference on hunger was held in 1969 at the start of the Nixon administration and helped to greatly expand federal feeding programs.

“We had a food stamp type program before but the conference vastly expanded and augmented it, and it created the Women, Infants and Children program,” former Ag Secretary Dan Glickman said in an interview. “It created modern school feeding programs and a lot of other programs.”

“I go back to the ‘69 conference where basically, it set up somewhat of a framework,” says Roger Szemraj, an attorney at OFW Law who has decades of experience working on food assistance issues. “And it took a number of years after that to get things implemented.”

At this point, however, the White House has not set out goals more specific than the five “pillars” that were announced when the conference itself was announced in May. The overarching goal is ambitious: “End hunger and increase healthy eating and physical activity by 2030, so that fewer Americans experience diet-related diseases like diabetes, obesity, and hypertension.”

The pillars are: “Improve food access and affordability; integrate nutrition and health; empower all consumers to make and have access to healthy choices; foster environments that enable all people to easily make informed healthy choices; and support physical activity for all.”

The White House is currently sifting through reams of comments from a wide range of anti-hunger groups, academics and food nutrition professionals — among others — about the conference’s goals, but has yet to announce a specific date or dates, or an agenda.

The lack of an announcement from the administration has allowed some rumors to swirl. On a planning call hosted by White House officials last week, one question raised was whether the “conference” would be no more than a media exercise.

“Definitely not,” said one of the White House organizers. “We are planning a full conference and not a press event.”

Meanwhile, numerous groups have been making their views known. One of those, which includes the Bipartisan Policy Center, World Central Kitchen, FMI-The Food Marketing Institute, and the Friedman School of Nutrition Science and Policy at Tufts University, will be making recommendations this month. 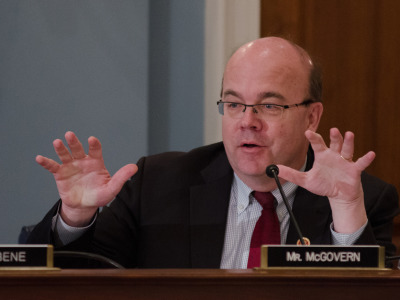 The BPC Food and Nutrition Security Task Force’s recommendations are likely to address ways that the government’s Medicare and Medicaid programs can be “be much more engaged in healthy eating as part of health care,” said Glickman, co-chair of the task force. He and others also emphasize the importance of getting all federal agencies on the same page when it comes to hunger and nutrition.

“You’ve got so many agencies involved in this, from USDA, to HHS, to the National Institutes of Health, to the Pentagon,” he said, mentioning the Department of Veterans Affairs’ efforts.

“It is shameful that tens of millions of our fellow citizens don't know where their next meal is going to come from,” Rep. Jim McGovern, D-Mass., said last week on a press call to discuss the conference. McGovern, who has pushed for such a conference for more than a decade, said, “We need an all-of-government approach to this — every agency in every department needs to be at the table.”

Glickman emphasizes the steady buildup of data showing the link between nutrition and health.

“We've learned a lot” in the past 50-plus years since the first conference, he said in an interview. “Our programs are pretty good, but there are ways that we can make them better.

"Certainly, we can spend a lot more money on nutrition research … because these diet-related diseases are sucking up giant amounts of money in our Medicare program, our Medicaid program," he added. "Hundreds of billions of dollars are being spent to take care of sick people who are in large part sick because they either don't eat right or they don't exercise.”

Dariush Mozaffarian, a cardiologist and dean for policy at the Tufts Friedman School of Nutrition, said the U.S. is “just drowning in diet-related chronic diseases, and most of this is preventable.”

The Food Research & Action Council released recommendations that largely called for expansion of current feeding programs, which FRAC said need to be made more accessible to a larger section of the population.

But FRAC President Luis Guardia said beyond strengthening SNAP and WIC, and addressing hunger in underserved communities, FRAC wants to see the underlying causes of food insecurity addressed as well.

“In the charitable sector, we all know that if you feed somebody, you'll deal with hunger immediately,” Guardia said. “You need to deal with the more upstream problems and that means having steady access to good paying jobs, it means having access to affordable health care, affordable housing, all those things kind of looped in are part of that multi-variable equation that we call poverty, which we know is at the root of hunger.”

“At the end of the day, we want people to have their own economic agency,” he said.

Asked whether the conference might want to look at whether the structure of farm programs leads to unhealthy diets, Glickman said he did not think so.

One area that could be addressed is fresh fruit and vegetable production, but he also said he thinks USDA has done a better job in recent years of allowing growers of produce to get crop insurance.

Neither, he said, should the conference get into dietary guidelines, which are addressed every five years through a process coordinated by USDA and FDA.

Questions to be examined at the conference likely will be, “How do we best get food to hungry people — whether it's through our food banking system, or through our SNAP program or other federal programs?” Glickman says. “Are they working well? Is there proper coordination? Is there enough flexibility in those programs?”

The second part “is going to be, how can we find out more about nutrition, about what foods actually make you and keep you healthy.”

“I do think it's pretty obvious that people know that what they eat has a lot to do with their health,” he said.