Robert Bonnie, who’s overseeing USDA’s work in ramping up climate-smart agriculture as undersecretary for farm production and conservation, is making the case that technology will be critical to ensuring farmers can reduce greenhouse gas emissions while maintaining global food supplies.

If “sustainable intensification” sounds familiar, it’s because it was also used by the Trump administration, albeit without the broader effort the Biden administration has put into addressing climate change.

On that note: Bonnie said USDA is trying to work with EPA in addressing concerns that ag groups have with EPA over ongoing pesticide issues. Picking up on a theme expressed by sugar growers, Bonnie said some climate-smart practices are dependent on the use of herbicides.

He noted EPA Administrator Michael Regan is from North Carolina, an agricultural state, and that Rod Snyder is EPA’s agricultural liaison. “We’ll use those relationships to the extent we can,” Bonnie said.

By the way: USDA’s rule changes for the latest disaster assistance program – the Emergency Relief Program – have cut the Farm Service Agency’s processing time to about 40 minutes per application, Bonnie said. For the earlier version of the program, known as WHIP-Plus, it could take up to five hours per application. 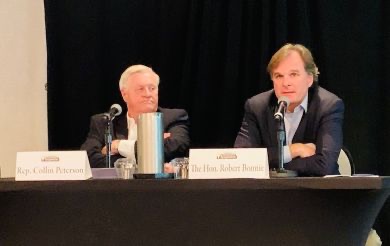 A race with big implications for control of the U.S. Senate is on the ballot today in Missouri. Leading Republicans have been worried that scandal-ridden former Gov. Eric Greitens could get the GOP nomination to succeed retiring Sen. Roy Blunt.

But state Attorney General Eric Schmitt has taken the lead in recent polls, with some surveys showing him ahead by as much as 14 points. House Ag Committee member Vicky Hartzler, who’s also in the race, is endorsed by the Missouri Farm Bureau.

Former President Donald Trump said on his Truth Social network he would issue an endorsement Monday, and speculation centered on Greitens. The former governor, who resigned in 2018 after allegations surfaced of sexual misconduct and campaign finance violations, was recently accused by his ex-wife of child and spousal abuse.

Trump issued a statement Monday night saying he was “proud to announce ERIC has my Complete and Total Endorsement!” but did not specify a preference between the two Erics – Schmitt or Greitens. Both campaigns claimed the former president’s support on Twitter.

Elsewhere: GOP Rep. Dan Newhouse, who voted to impeach Trump, is facing a primary challenge in central Washington. His GOP challengers include Loren Culp, a former police chief who’s got Trump’s endorsement. But Newhouse’s strong ag support could pull him through, according to the Spokane Spokesman-Review.

A New York dairy farm has sued Dairy Farmers of America, accusing the organization of monopsonizing the market for raw milk in the Northeast and underpaying dairy farmers for their milk.

Unlike a monopoly, where a company corners the market by becoming the sole supplier of a good, a monopsony is when a company gains market power by being the only buyer.

SRJF Inc., a dairy farm in Stanford, claims DFA has pushed other dairy cooperatives out of the Northeast, attempted to manipulate Federal Milk Marketing Order rules to set low raw milk prices, and forced non-member farmers to join the co-op.

"The result of DFA’s price-setting actions is that Grade A raw milk prices paid by processors across the Northeast have been artificially suppressed," the lawsuit says.

DFA did not respond to an Agri-Pulse inquiry.

A bipartisan bill creating a National Biochar Research Network has been introduced in the House, with a companion bill expected to follow shortly in the Senate, as lawmakers jockey to shape the research title of the 2023 farm bill.

The bill “would establish a national network of up to 20 research sites to test the full range of biochar types across soils, regions, and application methods to assess its potential to enhance carbon sequestration, crop production, resource conservation and agricultural resilience,” according to a fact sheet from the National Center for Appropriate Technology.

The bill would authorize annual appropriations of $50 million. USDA’s Agricultural Research Service would coordinate the research, and ARS, state ag experiment stations, and other agencies in USDA and the departments of Energy, Commerce and Interior would be eligible for funding.

According to ag consultant Ferd Hoefner of Farm, Food, Environment Policy Consulting, biochar is “the number-one leading carbon sequestration practice for agriculture.” Hoefner said the bill sponsors are seeking to include the bill language in the 2023 farm bill. Bill co-sponsors in the House include Reps. Chellie Pingree, D-Maine and Mariannette Miller-Meeks, R-Iowa.

Bayer became the majority owner of CoverCress on Monday after acquiring 65% of the company’s stock.

CoverCress is a company developing a rotational oilseed cash crop from pennycress. The crop has the potential to be grown like a cover crop, but harvested in the spring and used as a feedstock for renewable diesel.

Bunge and Chevron, the two other shareholders in the venture, will retain 35% of the company.

Environmental groups in North Carolina are challenging a recently issued general permit from the state Department of Environmental Quality that would authorize swine waste-to-energy projects.

Environmental Justice Community Action Network and Cape Fear River Watch are seeking an administrative hearing on the permit issued June 30, which they contend would “authorize any eligible existing hog operation, of which there are over 2,000, to install and operate an anaerobic digester and biogas collection equipment, store digested hog waste in open cess pits, and dispose of the waste by spraying it on fields.”

NC DEQ said in a summary of public hearings that the digester permit includes “multiple requirements to protect surface water and groundwater.”

He said it: “It’s slow. It’s not meeting the needs of the majority of the members. The good news is that there are a lot of like-minded countries who want it to work.” – Daniel Whitley, administrator of USDA’s Foreign Agricultural Service, talking about the World Trade Organization at the International Sweetener Symposium.

Philip Brasher and Noah Wicks contributed to this report.