Competition for irrigation water is heating up across the West and Plains as states struggle to deal with prolonged change, and the battles are expected to become more intense in the coming years due to climate change.

With that in mind, Nebraska is taking a proactive approach to ensure access to water when it’s needed, even at the risk of starting a dispute with its neighbors in Colorado.

Using a 99-year-old agreement, Nebraska is moving forward with plans to build a canal that would divert water into the state from the South Platte River in Colorado during the non-irrigation season.

Nebraska Gov. Pete Ricketts said it’s critical for Nebraska to claim its water rights “in the non-irrigation season, to be able to store that water in a reservoir system and then allow that to re-time those water flows to come out in dry seasons like droughts that we have today.”

Officials in Colorado concede Nebraska has the right to divert the South Platte, but say Nebraska most likely won’t achieve the goal they are after and will only hurt Colorado irrigators in the process.

“I would hate for them to spend all that money and then get half the water they thought they were going to get and then there's some kind of fight,” said Jim Yahn, a farmer and the general manager for Colorado’s North Sterling Irrigation District. 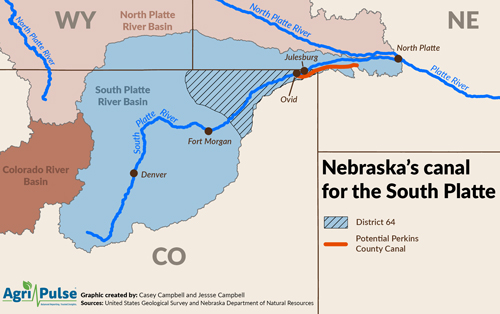 Droughts are projected to become even more common over the western Plains and western United States in coming decades, according to climate forecasts. States in the Colorado River Basin have so far been unable to agree on cuts in water usage demanded by the Bureau of Reclamation this year to maintain enough water for hydropower generation.

“Under long-term climate change, irrigated acreage is expected to decrease, due to a combination of declining water resources and a diminishing relative profitability of irrigated production,” according to the federal government’s latest climate assessment. The report notes that groundwater supplies are already in decline in the region.

Ricketts announced his proposal to build the Perkins County Canal in January 2022 after Colorado released its 2021 Basin Implementation Plan (BIP) for the South Platte Basin, which added 185 new projects for consideration that would cost more than $9.8 billion to implement.

States fail to agree on Colorado River water cuts
States still at odds over measures to deal with drought-starved Colo. River
Reclamation mulls allocation of $4B for Western drought impacts

Ricketts told Agri-Pulse that the release of the Colorado plan “left us a very short timeframe to pull together our plans and then communicate them in time to get appropriations in the 2022 legislative session.” He said Colorado was “proposing to take all of our water” that is reserved to Nebraska under the compact.

His administration also is concerned about the projected population growth and thus increased water demands for fast-growing cities along Colorado’s Front Range. For example, Denver relies on both the South Platte and the Colorado River Basin and is known to offset low water levels in one basin by using additional water from the other.

Nebraska has made two failed attempts before to divert water from the South Platte, but Ricketts believes his plan has the support and funding to get completed. The first attempt failed in the 1890s for financial reasons. The second effort, in the 1980s, got tangled in environmental concerns.

Ricketts received authority during the 2022 legislative session to plan and construct the Perkins County Canal starting with $53.5 million.

Colorado officials don’t believe the project will limit their state’s use of the water as much as Nebraska thinks.

Kevin Rein, director of the Colorado Division of Water Resources, says language in the compact won’t allow the canal to curtail diversions for development upstream, including the Denver area, regardless of how junior that area’s rights are.

The only project in Colorado that would actually be affected by the canal is a small reservoir near Sterling, according to Yahn. The project is in an area known as District 64, portions of which have more junior water rights under the compact.

Even then, the compact says District 64 is entitled to the first 35,000 acre-feet of water from Oct. 15 through April 1, Yahn said. He went on to say, as a result, it could be January before Nebraska could start diverting water. 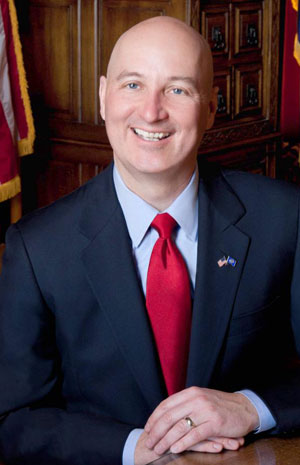 Yahn also said the project could ultimately harm farmers in Colorado. “If they build the canal, the people that it will affect most are the farmers in District 64. They use that water in the wintertime to offset their well pumping, which helps meet their obligation to Nebraska in the summertime,” said Yahn.

“It is kind of ironic to me that Nebraska wants to build this for irrigation of farm ground in Nebraska because of the population growth in Colorado, but when in fact the people that it hurts are the neighbors, the farmers, just to the west.”

Ricketts argues that the project will help farmers in both states.

“I think this will actually benefit those producers in Colorado and Nebraska, because a canal will help do the water recharging groundwater sources. Obviously, that will be limited to the people who are closest to the canal. But I think it should be long-term benefit to them,” he said.

Rein also said the canal could affect a joint project between Nebraska, Colorado and Wyoming, called the Platte River Recovery Implementation Program, which improves and maintains habitat for target wildlife. But Ricketts said stream flows would be maintained for the program.

The Nebraska Department of Natural Resources is conducting a study of the canal project and is due to report its findings by the end of the year.

Nebraska Natural Resources Director Tom Riley told Agri-Pulse the state envisions at least two reservoirs in the system with storage of approximately 160,000 acre-feet. He hopes to have the project ready to divert water within 10 years.